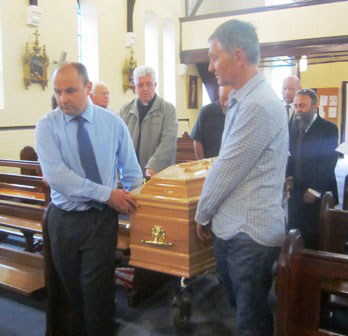 Fr Bill Foley died early on Wednesday morning, 30 July 2014, at the Bon Secours Hospital, Cork. He was 78 years of age.

Fr Bill’s remains were brought back to the African Missions House at Wilton, Cork, his home for the last nineteen years. Parishioners, friends and SMA confreres called over the following two days to pay their respects. At 6.30pm a large crowd gathered for the brief Prayer ceremony led by Fr Dan Cashman SMA before the removal to the adjacent St Joseph’s SMA Church at Wilton.

Fr Eamonn Finnegan, a close friend, looks on as Bill’s nephews, Michael, Paul, Kieran and Billy accompany his remains into the Church.

The Readings used by Fr Cashman were taken from 2 Corinthians 5:1ff and St Luke 7:18ff. Fr Dan then shared the following reflection:

“From the Gospel we have just heard we see that the only living proof Jesus himself could come up with when challenged to give an account of his life and ministry was precisely and simply to recount his actions. Blind seeing, cripples walking; lepers cleansed; deaf hearing; dead raised to life and preaching the Good News to the poor. When we think of Fr Bill’s career we can point to the countless Masses celebrated, the Word preached, the ignorant instructed’ the poor tended to, babies baptised, reconciliation effected, marriages consecrated, the sick anointed, the eyes closed, the dead buried and the work of the SMA proclaimed at every opportunity. Fr Bill’s career, his priesthood, his ministrations were what counted. They were the proof that he was worth something and that his life was justified. This is what Bill had in common with Christ.

There was something else he had in common with Christ and that was his gift of seeing the spark of the divine in each human being and stoking it into a flame. That is a legacy to bequeath to the world and that tells us that Fr Bill has reaped the rewards of his ministry. We are here to honour this man of fallible faults and priestly service who is now the recipient of these words, ‘come, good and faithful servant. Enter the joy of your Lord.’ We echo these words for we believe that our human journey in God-touched and that Christ’s priesthood is powerful and that a life given in service has every reason to expect resurrection. Bill’s epitaph could have been written by a Rev Sister when he left Nigeria. In her letter to him she wrote, ‘the poor will miss you.’ It is not only the poor who will miss Fr Bill Foley SMA.

After concluding with Prayers of Intercession some time was given to Fr Bill’s immediate family to say their final goodbyes. We then transferred Fr Bill to the Church where his remains were received by Fr Con Murphy SMA, whom Bill had assisted as Vice Provincial in 1983-1989.

After placing Christian symbols on the coffin – the Book of the Gospels, a Crucifix and a Stole [symbol of priesthood], Fr Murphy led a brief Prayer Service for the 100 or so people who gathered in the Church while rain beat down outside.

Fr John Horgan SMA, who worked with Fr Bill in Lagos, read from 1 John 3:1-2 and Psalm 102. Fr Murphy read from St John 12:24ff   and then shared some thoughts on a man he knew from the time he entered the Society. ‘Fr Bill was a man for others – listening to them, comforting them, teaching them. Many people benefitted from his generosity.’

After a decade of the Rosary – the Ascension – was led by the SMA Wilton community Leader, Fr John O’Keeffe, all were invited to the community Dining room for refreshments.

The SMA Provincial Leader, Fr Michael McCabe, led one of the largest gathering of SMA priests for many years as they, along with diocesan and other clergy, concelebrated the funeral Mass for the late Fr Bill Foley SMA who died last Wednesday morning, 30 July 2014. The Mass was celebrated at 12 noon on Saturday, 2 August, at St Joseph’s SMA Church, Wilton, Cork. The principal concelebrants were the SMA Superior General, Fr Fachtna O’Driscoll, Tralee schoolmate, Fr John Quinlan SMA, Fr Eamonn Finnegan SMA [who was encouraged to study for the priesthood by Fr Bill and is presently the Leader of the Claregalway community] and close friend Fr Finbarr Crowley [PP of Inishannon].

The Readings for the Mass were read by Fr Bill’s niece, Ann Loughnane, and nephew, Michael Foley.

Marion Maher, Billy, Tracy, Sheila and Kieran Foley led the Prayers of the Faithful and grand-nephews, Darren and Ian Maher brought the Bread and Wine to the Altar for the Offertory of the Mass.

The most telling comment of the entire funeral ceremonies were those quoted by Fr Cashman, from a letter of a Sister in Nigeria: “the poor will miss you.” Many many others will also miss Fr Bill Foley.

May he continue to pray for us from his place of rest. Amen.