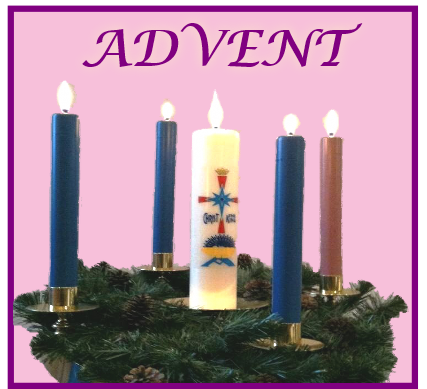 We begin our new liturgical year with the season of Advent – four weeks of preparation for Christmas. The purpose of Advent is, in the words of Richard of Chichester’s familiar prayer, ‘to see Christ more clearly, love him more dearly and follow him more closely.’ The Advent season with its special readings and attractive symbols (wreath and four candles) is designed to help us to appreciate more fully the significance of Christ’s first coming, and to make more room for him in our hearts now.

An ardent yearning for peace marked Israel’s long period of waiting for the first coming of Christ. A tiny nation wedged between huge and ambitious empires, Israel was at the mercy of larger nations constantly vying for superiority. Wars were almost constant, many with devastating consequences for the people of Israel. For much of its existence, Israel lived under the sovereignty of larger nations and was unable – and sometimes unwilling – to secure freedom and peace for its people. Naturally the people grew weary of war, weary of the divisions that had torn their country apart, weary of the instability of a world where power and might prevailed and the weak and powerless suffered constant oppression.

However, the people of Israel knew that the God they worshipped was a God who had heard the cries of their ancestors when they lived as slaves in Egypt, and who intervened to relieve their oppression. They knew that God could not remain indifferent to their plight, for he is the Lord of history who ‘puts forth his arm in strength and scatters the proud-hearted; brings down the powerful from their thrones and raises up the lowly; fills the starving with good things, and sends the rich away empty’ (Lk 1:51-53). So they hoped and they dreamed. They dreamed of a time when their God would decisively enter the world and bring an end to war and suffering, when he would finally establish his reign of peace and justice on earth and restore all creation to what he intended it to be. They dreamed of a time when the divisions that had torn their people apart would be healed and they would be united as God’s chosen people in a world at peace. This dream – this hope – is poignantly evoked by Isaiah in our first reading today. Isaiah envisions a time when Israel’s God will once again intervene decisively to ‘wield authority over the nations and adjudicate between many peoples who will hammer their swords into ploughshares, their spears into sickles. Nation shall not lift up sword against nation and there will be no more training for war’ (Is 2:4).

Two and a half millennia later, these words of Isaiah still resonate with us as we long for a world where war will be no more. Despite the coming of Christ and his inauguration of God’s universal reign of Love, justice and peace on earth, Isaiah’s vision of a world at peace under God is still far from being a reality. We have not yet learned how to live as children of a loving Father and brothers and sisters of Jesus Christ. We inhabit a world where  ‘the madness of war’ (Fergal Keane) tears asunder the thin fabric of civilisation, yielding an unholy harvest of destruction and misery. Almost daily we are bombarded with images of Putin’s senseless war on the people of Ukraine. And, sadly, this is only one of several wars afflicting our world. According to a recent UN Report there are 27 wars being waged currently, affecting the lives of 3.2 billion people. Many of these conflicts are causing much greater loss of life and human misery than the war in Ukraine.

So, as we await Christ’s second coming, we continue to dream Isaiah’s dream of a world where war is no more – the dream echoed by Pope Paul VI in his historic address to the United Nations on 4 October 1965 when he said: ‘No more war, war never again’. We long for that day when, to echo the words of St Paul in today’s second reading, the night of war and misery will be over and it will soon be daylight. We yearn for the day when we will ‘throw off everything that belongs to the darkness and equip ourselves for the light’ (Rom 13:12).

These words of Paul remind me of the familiar story of a wise old Rabbi who instructed his students by asking questions. He asked them: ‘How can a person tell when the darkness ends and the day begins?’ After thinking for a moment, one student replied, ‘It is when there is enough light to see an animal in the distance and be able to tell if it is a sheep or a goat’. Another student ventured, ‘It is when there is enough light to see a tree, and tell if it is a fig or oak tree.’ The old Rabbi then spoke, ‘No. It is when you can look into the face of a stranger and recognise him or her as your sister or brother. For if you cannot recognise in another’s face the face of a sister or brother, the darkness has not yet begun to lift, and the light has not yet come’.

So we pray: Come Lord Jesus and let the light of your love lift the darkness from our hearts and from our world. Amen.