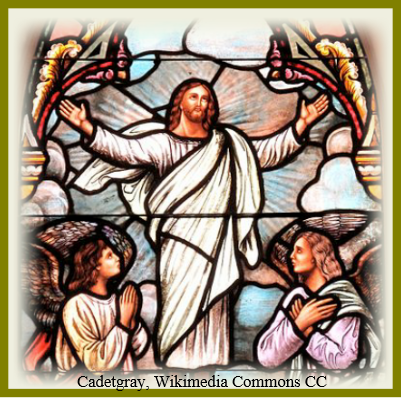 Theme: Jesus, Ascended into heaven as Lord of all Creation

Today, the feast of the Ascension, marks an end and a beginning: the end or culmination of Jesus’ mission on earth and his return to the Father to reign as Lord of all creation; the beginning of the mission of the Church, empowered by the gift of the Spirit. Our readings today give us two accounts of the Ascension of Jesus, both from the pen of St Luke. The gospel reading recounts the final scene of Luke’s Gospel where Jesus gives his disciples a mission – to proclaim repentance and forgiveness of sins – and promises to send them the Holy Spirit. Then, he tells them to remain in the city (Jerusalem) and there await the gift of the Spirit. He finally blesses them before he withdraws from them and is carried up to heaven (cf. Lk 24:51).

In our first reading from the Acts of the Apostles, Luke gives us a second, more elaborate, account of the same event. This account includes a revealing dialogue between Jesus and the apostles. They ask Jesus if the time has come for him ‘to restore the kingdom of Israel’ (Acts 1:6). This question shows us how far they were from understanding the life and ministry of their Master or the meaning of his death and resurrection. Their concern was still about the liberation of Israel from Roman occupation. In response Jesus does not reject or belittle their concern but gently reminds them that ‘it is not for them to know times or dates that the Father has decided by his own authority’ (Acts 1:7). He then reiterates the promise of the Spirit and highlights the universal scope of the mission he is entrusting to them: ‘You will receive power when the Holy Spirit comes on you, and then you will be my witnesses not only in Jerusalem but throughout Judea and Samaria, and indeed to the ends of the earth’ (Acts 1:8). The reading ends with the assurance from angelic messengers (‘two men in white’) that Jesus will again return as they have seen him go.

Our second reading today from St Paul’s Letter to the Ephesians underlines the profound theological significance of the Ascension of Jesus. Jesus, ascended to the right hand of the Father, is now not only the conqueror of sin and death. He is the Lord of all creation, and all things in heaven and on earth, are subject to him: ‘every Sovereignty, Authority, Power or Domination’. God the Father ‘has put all things under his feet and made him, as the ruler of everything, the head of the Church, which is his body, the fullness of him who fills the whole creation’ (Eph 1:21-23). During his earthly ministry Jesus was reputed to have taught with authority, unlike the scribes and Pharisees. Mark tells us that people ‘were astonished at his teaching, for he taught them as one who had authority, and not as the scribes…. He commands even the unclean spirits, and they obey him” (Mk 1: 20, 27).  Jesus words resonated with divine power and his actions manifested this power: healing the sick, casting out demons, stilling the storm, forgiving sinners. The authority of Jesus was not about imposing his will on others, but about overcoming the forces of sin and evil in the world, ushering in the reign of God, and communicating the “the fullness of life” (Jn 10:10).  Now, as the Resurrected and Ascended One, Jesus authority is supreme and all-embracing. In the words of one of the earliest Christian hymns, quoted by St Paul, he is the one ‘before whom every knee shall bow, in heaven and on earth and under the earth, and every tongue confess that Jesus Christ is Lord, to the glory of God the Father’ (Phil 2:10-11).

It is as Lord of the universe that the Risen Jesus is sending his disciples to be his witnesses, to be his agents in extending his life-giving mission to the peoples of all nations. During his earthly life, Jesus’ mission was limited primarily to the Jewish people. Now its boundaries are expanded to include all humanity and the mission he confides to his disciples has universal scope. To his still fearful and confused disciples, this commission must have seemed overwhelming and even impossible. But Jesus assures them that they will not be alone. As risen Lord, he will be present to them in a new and more powerful way, through the Holy Spirit, a presence unbounded by time or space. Empowered by the same Spirit, we, too, like the first disciples, continue to be witnesses of Jesus to the ends of the earth – joyful witnesses confident that, as Paul reminds us, ‘nothing can now come between us and the love of God, made known to us in Christ Jesus, our Lord’ (Rom 8:39). I will end with a short refection on the Ascension from the pen of Fr Flor McCarthy SDB:

The day of the Lord’s triumphant return to the Father

is not a day for narrowness or sadness.

Rather it is a day for openness and joy.

Therefore, let us lift up our hearts.

Let us raise up our minds.

Let our spirits soar and be free.

For sin and evil and death have been overcome.

We know nothing of the mystery of the beyond.

Lord, you have kindled in our hearts the hope of eternal life.

Guard this hope with your grace,

and bring it to fulfilment in the kingdom of heaven’