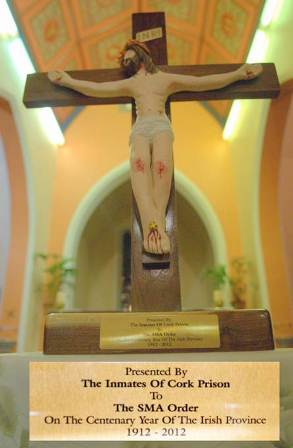 This year the Irish branch of the SMA is celebrating its 100th Anniversary as a separate unit of the Society of African Missions.

Though the SMA was founded in Lyons, France, in 1856 and the first Irish SMA died in 1880, (Brother Alphonsus Nolan who died in Agoué, Dahomey, modern-day Benin Republic, on 17 October 1880) it was not until 1912 that the Society began to organize itself into separate units when the Irish Province was erected.

Up to that time it was led by a Swiss SMA priest, Fr Joseph Zimmermann who established the Society on the Blackrock Road in Cork where it still has its Irish Mother House.

As we prepare to host different events throughout the country to celebrate this milestone, the Cork Prison (Officers and Inmates) took the initiative to arrange a Mass in the African Missions Church, Blackrock Road (built by Fr Zimmermann) to honour the SMA on the Centenary of the Irish Province. The Prison Officers’ and other staff formed a special Choir to sing at the Mass and a beautiful Crucifix (pictured), made by two of the inmates at the Prison, and a Pendant from the staff was presented during the Mass.

The SMA link with the Prison is through its Chaplain, Fr Michael Kidney SMA, who has served there for many years.

Fr Fachtna O’Driscoll, SMA Provincial Leader, preached at the Mass and thanked the Officers, Inmates and Choir for their most thoughtful and supportive initiative. The Choir will make a return visit to the African Missions when they sing during the Novena in honour of Our Lady in May.