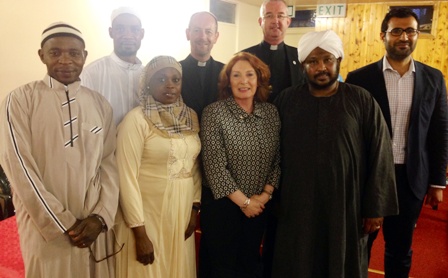 The SMA Justice Office was happy to help facilitate the invitation extended by Sheikh Ihab Ahmed, Imam of the Blarney Street Mosque, for Christians and public representatives to join with the Cork Muslim Community for the Iftar إفطار‎ meal for the last Friday of Ramadan.  .

Following a telephone call from Sheikh Ihab, Gerry Forde, the SMA Justice Officer, made contact with the Church of Ireland and Catholic Dioceses, with the  Offices of  the Lord Mayor and local TD’s to inform them of the occasion and to extend Sheikh Ihab’s invitation to them.  Contact was also made the Evening Echo, the local newspaper, to request that they cover the event.

Muslims in Cork, together with Muslims around the world observed the holy month of Ramadan with fasting from sunrise to sunset. The fast of Ramadan is one of the five pillars of Islam.  Iftar is the fast-breaking meal taken at sunset following the abstention from food and water during daylight hours.

Following a shared meal together the guests were received in the Mosque Prayer Room and warmly welcomed by the assembled congregation as they gathered for prayer.

MESSAGE FOR THE END OF RAMADAN ‘Id al-Fitr 1435 H. / 2014 A.D.
Each year the Vatican’s Council for Interreligious Dialogue issues a message at the end of Ramadan – this year’s message is entitled: “Towards a Genuine Fraternity between Christians and Muslims”.  Read more