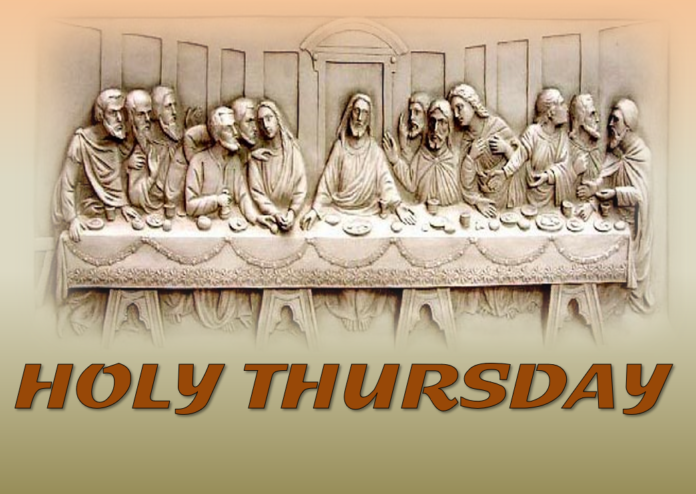 Holy Thursday celebrates three interrelated events:
a) The Institution of the Eucharist at the Last Supper (expresses the core of our identity as Disciples of Christ);
b) The Washing of the feet: the Christian understanding of leadership and authority as service of others;
c) The Institution of the Priesthood as a ministry of service to the People of God.

In a book he wrote some years ago on the Eucharist (Why Go To Church?) the famous Dominican author, Timothy Radcliffe, tells a memorable story about the importance of the Eucharist for the Early Christian community. In the year 304 AD (a time when the Christians were being persecuted for their faith under the Emperor Diocletian), a number of Christians were arrested in North Africa for gathering together in the house of a Roman Official to celebrate the Eucharist on a Sunday. When the Roman pro-consul of the area asked the owner of the house why he had allowed these people into his house, he replied that these people were his brothers and sisters. The pro-consul insisted that he should have forbidden them, but he replied that he could not, and added these words, ‘Without the Day of the Lord we cannot live’. 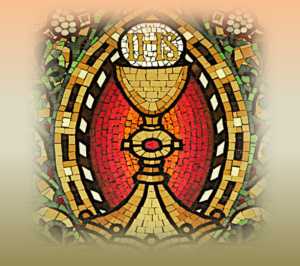 Celebrating the Eucharist was what gave meaning to their lives. So they would risk imprisonment or even death rather than try to live their lives without the Eucharist. This has been true of many Christians down through the centuries. To cite just a single example from my own background. I come from Crossragh in County Cavan. It is named after a Cross erected on a hill – where people used to gather to celebrate the Eucharist at the time of the Penal Laws when public expression of the Catholic Faith was forbidden.

In every Eucharist we celebrate the presence of Christ, the one on whom our lives are based, the one whose love lights up the darkness of our lives. We also celebrate our own deepest identity as children of God, brothers and sisters of Christ. The great North African theologian and saint, St Augustine, expressed the meaning of the Eucharist concisely, when he said, as he held up the sacred host before the Christian assembly, ‘See what you are, and become what you see. What you see is the body of Christ and that is what you are and what you are called to become’. It is to this affirmation we answer ‘Amen’ when we receive the sacred host. 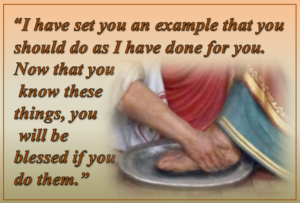 We receive the body of Christ and we must become the body of Christ for others. What does this mean? The Christ we receive is the one who came ‘not to be served, but to serve and to give his life as a ransom for many’ (Mk 10: 45). At his last Supper with his disciples, he said: ‘I am among you as one who serves’ (Mk 22:27) and to show that he meant what he said he washed his disciples’ feet – the action of a slave at that time. And he commanded his disciples to do likewise; ‘I have given you an example so that you may copy what I have done’ (Jn 13:15). In the Eucharist we receive the body of Christ not just to nourish us but to enable us to become Christ’s body for others.

A third interlinked theme of our celebration is priesthood. The core of the priest’s identity is to be found in the Eucharist, in the body of Christ broken and shared for the life of the world. Some years ago I came across the following identikit of the priest penned by two members of the Society of Missionaries of Africa (popularly known as the White Fathers), Cardinal Michael Fitzgerald and the late Fr René Dionne.

We have been given
Eyes to see and ears to listen
And a mind and heart to interpret what you see
And hear the hidden meanings beneath the words spoken…
A tongue to speak for the innocent… and the guilty,
To praise, encourage and support,
To proclaim, in season and out,
The Good News that always renews the lives of all who listen.

We have been given
Feet to approach those waiting in hope,
To walk the extra mile.
To seek out the hidden and the lost…

We have been given
Hands to reach out
To strengthen the fearful,
Protect the weak and lift up the fallen,
To share burdens and wipe away tears,
To embrace the dying and lead them to their final home,
To build up, not tear down,
To fan the embers, not quench the smouldering wick,
To bless, not strike,
To consecrate and give, not withhold and kill.

We have been given
A heart to feel with,
To open doors closed by despair,
To discover the best in others and set it free,
To rise to the summons in the night and not count the cost,
To understand and forgive … or simply to forgive,
To comfort the sorrowful.
To love and thereby heal wounds.

All these things God has given us so that people may never doubt or forget his presence among them, that in our touch, our words, our actions, he may touch and speak and act; and they in turn may sense his presence wherever we go, and seeing us, may know, with little effort, they catch a glimpse of God.

Living out this identity faithfully and with every fibre of our being in the only credible and meaningful response to the present crisis of priesthood in the Western world.