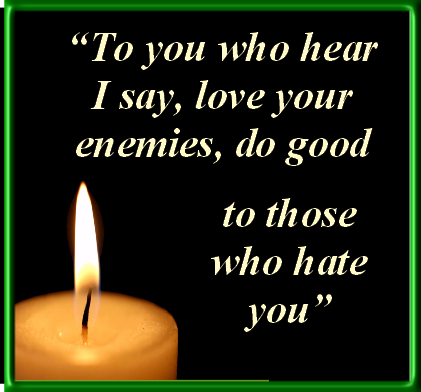 ‘The one thing we can never get enough of is love. And the one thing we never give enough is love.’ So wrote Arthur Miller, the famous American playwright. Sadly, the word ‘love’ is so overused in contemporary discourse that it has lost much of its meaning. We speak of love of work, love of country, love of sport, love of food, love between friends, love of parents for their children, romantic love, etc. Examples could be multiplied. There are indeed many kinds and forms of love. In his encyclical letter, God is Love, Pope Benedict XVI distinguishes three main kinds of love: eros, the spontaneous attraction between a man and woman which tends towards union; philia, the mutual love that exists between friends; and agape or self-less and self-sacrificing love, supremely manifested in Jesus Christ, especially in the act of forgiving his enemies. It is this supreme expression of Christian love which is the central theme of today’s readings.

The desire for revenge is deeply ingrained in us. I remember as a young boy being enthralled by the novel, The Count of Monte Christo, a tale of revenge. It tells the story of a sailor, Edmond Dantes, who is betrayed by his friend, Fernand, falsely accused of treason, and imprisoned in frightful conditions for thirteen years. With the help of a fellow prisoner, he eventually escapes, and exacts revenge on those who had so cruelly betrayed him. I must confess that,  as a teenager, I found it easy to identify with Dantes’ desire for revenge, and felt a certain justice in the clever way in which he ‘turns the tables’ on those responsible for his unjust incarceration. Later in my life, however, I developed an aversion to stories of revenge, especially after watching some of the films of the American actor, Charles Bronson. I came to realise that the apparent ‘sweetness’ of revenge is short-lived and soon dissipates leaving the heart ‘high sorrowful and cloy’d’, to quote the poet, John Keats. Revenge and retaliation only add darkness to darkness, extinguishing the light that might lead to transformation. Only love has the power to transform. In the words of Pope Benedict XVI, ‘Love is the light – and in the end, the only light – that can always illuminate a world grown dim and give us the courage needed to keep living and working’ (God is Love).

Our first reading today sets before us the example of David, who resisted the urge to revenge himself on King Saul who was jealous of him and wanted to get rid of him. Under cover of darkness David and his companion, Abishai, make their way into the camp of King Saul and find him asleep with his spear close to his head. Though David could have killed Saul, he simply makes off with his spear. He later returns the spear and tells Saul the reason he did not take advantage of the opportunity to kill him: ‘Today the Lord put you in my power, but I would not raise my hand against the Lord’s anointed’ (1 Sam 26:23).

The revolutionary moral precepts of Jesus in today’s gospel go far beyond resisting the desire for revenge. Based on the foundation of the beatitudes, they develop in particular the practical demands of the fourth beatitude: ‘Happy are you when people hate you, drive you out, abuse you, denounce your name as criminal, on account of the Son of Man’ (Lk 6:22). Jesus wanted a world transformed by the power of love, where the barriers of distrust are overcome and the legacies of hatred dissolved; where hurts are healed by compassion and misunderstandings dissipated by forgiveness. So he enjoins his disciples to bear hatred, insults and scorn with patience, without seeking to be avenged.  But he asks even more of them, spelling out a list of seemingly impossible positive demands: ‘love your enemies; do good to those who hate you; bless those who curse you, and pray for those who maltreat you‘ (Lk 6:27-28). As difficult as these precepts may sound, they embody the highest ideals of Christian life and virtue. They challenge us to respond to darkness with light, to respond to what is worst in others with what is best in us. They invite us to emulate the perfect love of the Father, whose compassion extends to the ungrateful and wicked: ‘Be compassionate as your Father is compassionate’ (Lk 6:36).

Living at a time when violence and a culture of revenge are still rampant, it is a matter of the utmost importance and urgency that Christians embrace the gospel teachings of Jesus on the love of enemies so that these precepts inform our choices in life, especially the choice to do good, to love and forgive. In the words of Martin Luther King Jr: ‘we must develop and maintain the capacity to forgive. Those devoid of the power to forgive are devoid of the power to love. There is some good in the worst of us and some evil in the best of us. When we discover this, we are less prone to hate our enemies’.