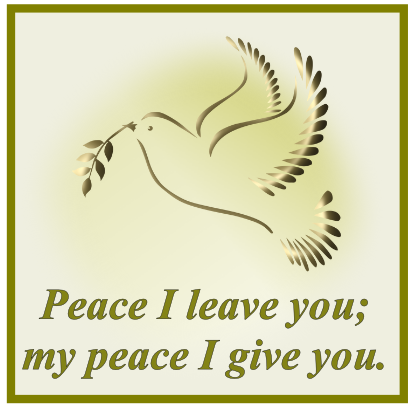 Growing up in Ireland in the 50s, our family was fortunate to have had a rather large radio. After returning from school, I loved to listen to the latest pop music on Radio Caroline. I remember my disappointment when the battery went flat and the music stuttered to a stop. However, my Dad’s reaction was one of relief. He would say: ‘Oh peace, blessed peace!’ The longing for peace is one of the deepest desires of the human heart.

Towards the end of the 19th century, the poet William Butler Yeats was living in the busy noisy metropolis of London. He felt homesick and lost, unable to connect with what he called his ‘deep heart’s core’. He longed to return to his homeland and live in a more peaceful ambience – a longing he expressed in this famous poem, The Lake Isle of Innisfree.

I will arise and go now, and go to Innisfree,
And a small cabin build there, of clay and wattles made;
And I shall have some peace there, for peace comes dropping slow,
Dropping from the veils of the morning to where the cricket sings;
There midnight’s all a glimmer, and noon a purple glow
And evening full of the linnet’s wings.

For Yeats peace was synonymous with escape from the hustle and bustle of city life and retreat to a remote island where he could live in communion with nature.

As we see in today’s gospel reading, peace was a key element in the message of Jesus.  Our reading is part of Jesus’ final discourse to his disciples, on the eve of his death and return to his Father. Peace is his parting gift to them: ‘Peace I leave you; my own peace I give you. A peace the world cannot give, this is my gift to you. So do not let your hearts be troubled or afraid‘ (Jn 14:27). The theme of peace looms large throughout the life and ministry of Jesus. His constant concern was to free people from fear and anxiety and bring them lasting peace: ‘Fear not… Do not worry… Be not afraid it is I’ (Mk 6:50); ‘Go in peace your sins are forgiven’ (Lk 7:50). When he sends his disciples out on mission he tells them: ‘When you enter a house say, “Peace be to this house’” (Lk 10:5). Appearing to his frightened and confused disciples after his resurrection, and before commissioning them, his first words are: ‘Peace be with you. As the Father has sent me so I am sending you’ (Jn 20:21). However, the peace Jesus offers his disciples – and which he also bequeaths to us – is not the peace Yeats longs for – an escape from the trials, difficulties and responsibilities of life. It is, instead, ‘a peace the world cannot give’, a peace that comes as a gift of the Spirit; it is a peace that empowers us to be agents of God’s reign of justice and love, and enables us to endure all kinds of trials and tribulations. The peace of Jesus is an enduring peace that no one can take away from us.

Our first reading today, taken from the Acts of the Apostles, shows that the peace Christ bequeathed to his disciples did not render them immune from disagreement and conflict. It describes the first major controversy of the early Church and tells us how it was resolved. The issue in question concerned the Jewish rite of circumcision. This was a requirement of the Mosaic law for all male Jews and a sign of their identity as ‘God’s covenanted People’. The first Christian converts were circumcised Jews. They did not see themselves as founders of a new religion but rather as members of a movement within Judaism centred on Jesus Christ as the true Messiah. As the Jesus movement spread outside Jerusalem, especially in Antioch, it attracted increasingly large numbers of Gentiles. The question arose as to whether or not these new converts should also be circumcised. The issue was hotly debated with some Jewish converts, who had been members of the Pharisee party, insisting on circumcision, contrary to the view of Paul and Barnabas: ‘Unless you have yourselves circumcised in the tradition of Moses you cannot be saved’ (Acts 15:1).

The issue was finally resolved at a meeting of Paul, Barnabas, and some members of the Christian community at Antioch with the Apostles and elders of the Church in Jerusalem. The meeting was known as the Council of Jerusalem and took place around the year 50 AD. The Council decided unanimously that Gentile converts to Christianity should not be obliged to be circumcised or to observe the rites of the Mosaic law, with the exception of some particularly sensitive practices for Jewish members of the Christian community. Given the context of the time and the fact that the leaders of the Christian Community in Jerusalem were themselves circumcised Jews, this was a remarkable decision, resolving a conflict that could have split the early Church. As Luke’s account makes clear, this decision was the fruit of a discernment, guided by the Holy Spirit. ‘It has been decided by the Holy Spirit and by ourselves’ (Acts 15:29). It was a decision that not only ensured the unity and peace of the early Christian Community but paved the way for the spread of Christianity to the ends of the earth.

Let us pray for the peace of Christ, the gift of the Spirit, to empower us as it empowered Jesus’ first disciples, to continue to proclaim the Gospel of love and peace with courage and equanimity in our violent and confused world.