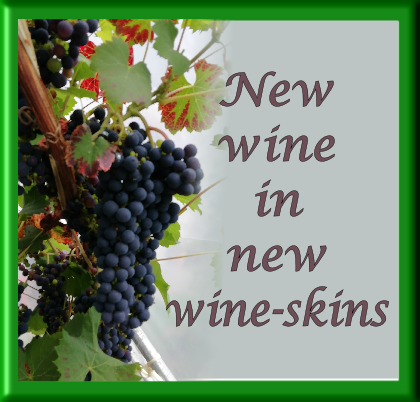 In an interview some years before his death, the well-known Irish radio and television broadcaster, Terry Wogan, spoke about how, despite his traditional Catholic upbringing, he had lost his faith while still a teenager. Speaking about his childhood, he said: ‘There were hundreds of churches, all these missions breathing fire and brimstone, telling you how easy it was to sin, how you’d be in hell. We were brainwashed into believing.’  Too often Christianity has been presented and experienced as a rather grim and joyless affair, confronting us with feelings of guilt and failure. Obviously this was how it was perceived by the young Terry Wogan and understandably rejected as such, for that is not what the Christian message is about at all. As today’s readings clearly show, Christianity is essentially a religion of unwavering hope, of new life and overflowing joy. It is about ‘new wine in new wineskins’ (Mk 2:22). It is a celebration of God’s unfailing love and mercy, best conveyed in the biblical image of a wedding feast or banquet.

Our first reading from Isaiah is a joyful proclamation of God’s plan to transform Jerusalem, devastated by the Babylonians, and reunite and transform the scattered and disheartened people of Israel so that all nations will see their integrity. ‘No longer are you to be named “forsaken”, nor your land “abandoned”, but you shall be called “My Delight” and your land “The Wedded” (Is 62:3). This wedding image is repeated again toward the end of the reading: ‘for the Lord takes delight in you and your land will have its wedding’ (Is 62:4) – a wedding in which God will be the bridegroom and Israel the beloved bride in whom God delights.

Our gospel reading recounts the familiar story of the wedding at Cana in Galilee, when Jesus turns water into wine, ‘the first of the signs given by Jesus’ (Jn 2:10). While this may be the first sign or visible manifestation of Jesus’ identity and messianic mission recorded in John’s Gospel, it is the third epiphany of Jesus we have celebrated over the past fortnight. On the 6th of January, Epiphany Sunday, we recalled the visit to Bethlehem of some wise men from the East, bringing gifts of gold, frankincense and myrrh and testifying to Jesus as the King of kings. Last Sunday, we celebrated the Feast of the Baptism of Jesus by John in the river Jordan, when the Heavenly Father, by word and Spirit, attested to Jesus’ identity as his Beloved Son. Today, we recall Jesus’ first miracle, when he changes water into wine, testifying to himself as Son of God and letting his glory be seen so that his disciples believed in him (Jn 2:11).

The scale of the miracle at Cana is stunning. On the orders of Jesus, in response to his mother’s request, six enormous stone jars, capable of holding twenty or thirty gallons each, are filled to the brim with water, and changed into wine of the highest quality. This would be enough wine – about 800 litres – to make all the guests very happy for a year, not just one week – the normal length of a Jewish marriage celebration at the time of Jesus. Clearly the story is not meant to be taken literally. The abundance of wine is a sign or symbol of the  ‘new dispensation’ initiated by Jesus – a dispensation of ‘grace and truth’ (Jn 1:17), of new life and overflowing joy. Isaiah’s prophesy of the messianic banquet (cf. Is 25:-6-8) has arrived in the life and ministry of Jesus, who brings healing to the sick, gives hope to the hopeless, turns tears into joy, and changes death into life. An abundance of wine of the best vintage is the perfect sacrament of that fullness of life Jesus came to bring on earth: ‘I have come that you may have life and have it to the full’ (Jn 10:10).

There’s a popular Danish movie, Babette’s Feast, one of Pope Francis’ favourite movies, which captures very well the message of today’s readings, especially the gospel. It won an Oscar for best foreign film in 1988. Based on a short story by Karen Blixen (of Out of Africa fame), it portrays the transformation of strict Pietist community led by the elderly daughters of the group’s founder, who regard all earthly pleasures with disdain and eat only bland food. Their lives are turned upside-down when Babette, a first-class French chef,  shows up at their home, bringing a letter from an old friend and seeking refuge from violence in her native Paris. She offers to work for free, and stays with them for 14 years, gradually gaining their trust.

One day, she wins the lottery and, instead of returning to her home in Paris, she uses all her money to prepare a lavish feast in honour of the group’s founder. Watching the stiff, suspicious elders become transformed by the conviviality of a great feast, prepared with love and attention to detail, is an unforgettable experience. In the course of a wonderful celebration with the choicest of foods, spirits are lifted, bridges built, squabbles settled and friendships restored. The sisters are reminded of a sermon delivered by the minster many years before: ‘For mercy and truth have met together and righteousness and bliss have kissed one another’ and it seems to them, like an epiphany, that they can now see the world for what it really is – a place of light and joy. This was Babette’s gift to the community who offered her refuge and it is Christ’s gift to us today. What is our response?