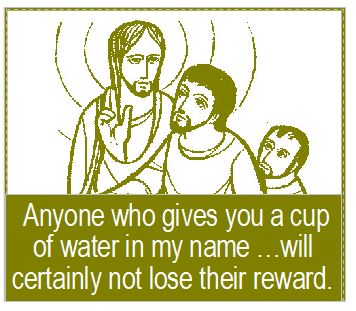 Thomas believed that God had chosen the Catholic Church as the only church who could witness to him. After a car accident overseas, where most of the people were of a different religion, he was cared for by Muslims and Animists who had taken him to hospital, which meant leaving their own farm work. Some even stayed with him the three days he was hospitalised, bringing him food and caring for him until his embassy arranged to get him back home. This was a huge conversion experience for him, realising that these people had never asked if he were Christian, Muslim or Animist, what type of life he lived etc. etc. He realised that God had worked through these people in a way he would never have believed.

Jesus sells his salvation very cheaply in today’s gospel, saying that no one who gives a cup of water to another in his name (since we all belong to God) will lose his reward. How much more will the Lord reward those who cared for that man who had the accident even if not claiming to do it in the name of Jesus?

Is there not a temptation in every religion and even within religions to elitism and exclusivity? It is a very dangerous attitude and one which we need to be aware of and understand. In today’s gospel John the beloved disciple clearly succumbs to this temptation. “We saw a man”, he complains, “who was not one of us casting our devils in your name; and because he was not one of us we tried to stop him”. Jesus told him that he should not stop such people. “No one who works a miracle in my name is likely to speak evil of me.” And he gives a very important principle. ’Anyone who is not against us is for us’.

Jesus gives us many examples from his own life confirming this. He asked a Samaritan woman for a drink of water when he sat down tired by the well. The Samaritans were the hated enemies of the Jews because they were seen as heretics and destined for damnation. It would have been unthinkable for a Jew to speak to a pagan Samaritan. And, above all, to a woman who was alone and therefore of doubtful reputation. But Jesus came to show us that God was the father of all of us and welcomes everyone irrespective of labels. Jesus showed this in many encounters with other so-called sinners – prostitutes, tax collectors, public sinners, people who didn’t attend the Sabbath synagogue worship etc.

Today’s readings teach us that we are free from the belief that we are the only ones representing God in this world. God is just not interested in labels: Catholic, Protestant, Muslim, Animist, Hindu, Buddhist etc. He is underlining the great truth that the essence of following Jesus is found in the way we live love. Very simple, but how very demanding. Love alone counts. A simple Taize chant puts it this way: “Where there is love, there is God.” The basis of Jesus’ ministry was hospitality and welcome. He was not in the slightest prejudiced. What of us?

The real challenge of the gospel is whether we accept that the Spirit of God today works wherever God wishes and through whomsoever is chosen. It is necessary to remember that the truth is always bigger than anyone’s understanding of it. No one can possibly grasp all truth. We simply must be open to the Spirit’s working in our world. This call for tolerance is not a lazy acceptance of anything that goes. It means respecting the freedom of conscience of others. But if groups put forward doctrines calculated to destroy morality and to remove the foundations from all civilized and Christian society then they are to be combated.

The call is for each one of us to be faithful to the call God gives us.

Jesus warns us to beware of leading others astray, especially the little ones. ‘Little ones’ here is not confined to children but those who may be weak in the faith, people struggling to respond to God and failing often or just simply those regarded as weak physically, spiritually or morally.

Jesus is very harsh on those who might scandalise them. There are two ways of doing this. First, obviously scandalising others by bad example. Living in a way which really leads others to do the same or weaken their attempts to live good lives. Any group can do this, be they non-believers or believers including priests and religious. Secondly, we can be obstacles to others by making demands on them that even God wouldn’t make. Do we place too many obstacles in the way of people receiving Holy Communion? Is the role of women in the Church too limited? We can give scandal when we are over demanding and judgemental of those who still struggle to reach a lower level of commitment even if it is the best they can do. The effect is often to make such people lose heart and give up.

‘Lord Jesus, open our eyes to see the many ways you work through different peoples and religious groups. Wherever there is love and goodness surely your Spirit is at work. Amen’.

Edited from a homily by the Fr Jim Kirstein, SMA