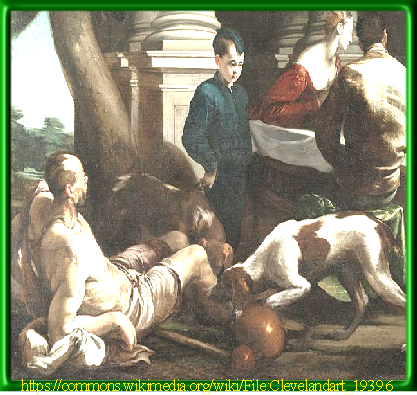 Homily for the 26th Sunday of Year C

Theme: Indifference to the plight of the Poor

Today’s readings, like those of last Sunday, invite us to continue our reflection on the dangers of riches. In our first reading, the prophet Amos vividly describes and roundly condemns the self-indulgent life-style of the wealthy. ‘Lying on ivory beds and sprawling on their divans, they dine on lambs from the flock and stall-fattened veal’ (Amos 6:4). He identifies their basic sin as indifference. They do not care about the afflictions of the poor or about the imminent attack on the land of Israel by a foreign power [Assyria] as long as they can live in the lap of luxury. ‘About the ruin of Joseph, they do not care at all’ (Amos 6:6). The prophet reminds them that their wealth will not save them from impending disaster. ‘They will be the first to be exiled; the sprawlers’ revelry is over’ (Amos 6:7). Diplomacy was not Amos’s strong point!

In the gospel reading from Luke, Jesus recounts a familiar rich man/poor man folk tale, adding fresh and telling differences. In the story as told by Jesus, the poor man has a name, Lazarus, which means ‘God will help’, whereas the rich man has no name. Usually, it is the poor who are nameless, while the rich have names, glamour, fame and fortune. Furthermore, the fortunes of Lazarus and the rich man are reversed. The final destiny of Lazarus is to be ‘carried away by the angels to the bosom of Abraham’, whereas the rich man ends up ‘in torment in Hades’ (Lk 16:22-23). Like Amos, Jesus pinpoints indifference as the basic sin of the rich man. Cushioned by his lavish life-style, he is utterly oblivious to the presence of the poor man at his gate, starving and ‘covered with sores’ (Lk 16:20). He fails to see Lazarus as a fellow human, a brother, in dire need. The worlds of the rich and poor can exist side by side but never meet.

Indifference is the cardinal sin of those whose wealth blinds them to the sufferings and deprivations of the poor. It should be counted among the capital sins as it lies at the root of so many other sins of neglect. As Elie Wiesel, a Jewish prisoner in the Auschwitz and Buchenwald concentration camps, wrote: ‘The opposite of love is not hate, it’s indifference. The opposite of art is not ugliness, it’s indifference. The opposite of faith is not heresy, it’s indifference. And the opposite of life is not death, it’s indifference.’  Indifference is truly a deadly sin – a sin from which it is almost impossible to recover. And yet, recovery is possible, as Shakespeare’s King Lear illustrates. As an old man, Lear is driven from his comfortable palace by his ungrateful daughters, and finds himself on an exposed and barren heath in the midst of a frightful storm. At the mercy of the elements, he comes to identify with the sufferings of the poor, whom he had never noticed before. For the first time, he begins to feel compassion for them and wishes to share his wealth with them.  He says:

‘O, I have ta’en too little care of this!
Take physic, pomp;
Expose thyself to feel what wretches feel,
That thou mayst shake the superflux to them,
And show the heavens more just.’

The parable of the rich man and Lazarus is particularly relevant to our time, when the gap between the rich and the poor continues to grow. The growing concentration of the world’s wealth in the hands of a few billionaires has been highlighted by Oxfam. Closer to home,  a 2022 report from Social Justice Ireland stated that, despite the existence of a comprehensive social welfare system, the gap between the rich and poor in Ireland has increased over the past few years. We are all aware that the recent dramatic increase in the price of gas and basic foodstuffs is having dire consequences for every one, especially the poor. Many will be unable to make ends meet. We may say that this is a problem for the Government to solve but it must be our concern, too. We cannot be indifferent to the poverty around us. We are our sisters’ and brothers’ keepers. As St John Chrysostom, that great champion of the poor, reminds us, we cannot celebrate the presence of Christ in the Eucharist without serving him present in the poor: ‘Do not pretend to honour Christ in the Church while you neglect him outside where he is cold and naked’.   So, let us ask the Lord today to make us more aware of his presence in the poor and to open our hearts in response to their needs.

I will end this homily with an apt reflection on the true purpose of wealth from the pen of Fr Flor McCarthy, SDB:

A week ago the sycamore tree was loaded with gold.
However, instead of sitting back and enjoying it,
it began to give it away.
At first it was just a leaf here and a leaf there,
whenever the wind asked for a contribution.
But soon it was giving it away in fistfuls,
without being asked,
and without a thought for a wintry tomorrow.
Wealth is judged,
not by the amount that is accumulated,
but by the amount that is given away.
The only wealth that is worth having is the wealth of the heart.
To close one’s heart is to begin to die;
to open it is to begin to live.