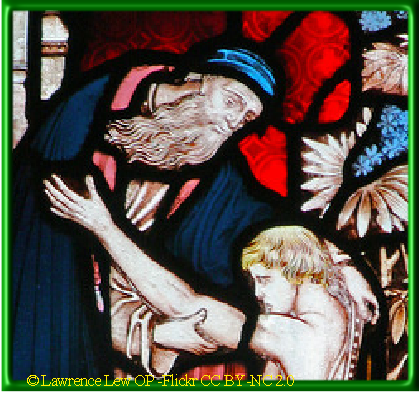 Homily for the 24th Sunday of Ordinary Time: Year C

Theme: The Embrace of a Forgiving God

The God of Jesus Christ is above all a God who forgives. This is shown supremely in Jesus’ death on the Cross, when he prays to his Father to forgive those who are crucifying him. What an extraordinary act of forgiveness! And it comes at the climax of a life and ministry in which Jesus constantly proclaimed and witnessed to God’s mercy and forgiving love. The American poet, Robert Frost, expresses this fundamental truth of the Gospel memorably in the following lines from his poem,     A Masque of Mercy:

‘Christ came to introduce a break with logic

That made all other outrage seem as child’s play:

The Mercy on the Sin against the Sermon.

Strange no one ever thought of it before Him.

Twas lovely and its origin was love.’

The God revealed in the ministry of Jesus is a God who not only forgives, but who delights in forgiving – a God who reaches out to the sinner; a God who actively seeks out the lost; a God who loves the company of sinners.  It was this extraordinary witness which led him into conflict with the Jewish leaders, the scribes and the Pharisees, who prided themselves on their strict observance of the law and looked down on those who were not like themselves – the uneducated, the morally week, the tax collectors, the public sinners, the prostitutes. The Pharisees were scandalised by the strange behaviour of Jesus – not only his mingling with public sinners and talking to them, but even eating with them. ‘This man’, they said, ‘welcomes sinners and even eats with them’ (Lk 15:3).

In today’s gospel reading from Luke Jesus responds to this criticism and seeks to correct the mistaken image of God as a harsh task-master. His response is conveyed in three beautiful stories illustrating God’s attitude towards sinners – the parables of the lost sheep, the lost coin and the prodigal Son.  The image of God that emerges from these parables is that of an utterly compassionate and merciful Father who, far from feeling offended or angry with those who have strayed away from his household, is prepared to go to any lengths to bring them back. He doesn’t even wait for them to show signs of repentance, so overjoyed is he to have them back.

Let us take a closer look at the familiar parable to the Prodigal Son. The behaviour of the younger son is certainly egregious. In leaving his father’s house, he is abandoning his family and religion. With good reason, he wonders if his father can forgive him. Certainly he does not expect to be accepted back as a son and is prepared to be treated as a hired servant. What happens in the story is quite astonishing. Not only is the prodigal son not reduced to the status of a hired hand, he is not even given time to say how sorry he is. From afar, his dad sees him coming, rushes out to meet him, throws his arms around him and weeps tears of joy now that his son, whom he has never stopped loving, is back safe and sound.

You can imagine the impact of this reception on the younger Son. He knew he had broken his dad’s heart when he left home. On his return, he hoped simply to get a place to lay down his head and have some proper food to eat. Imagine his reaction when he sees his dad running to meet him with tears streaming down his cheeks. His dignity as son is immediately restored and a great party held in his honour. In his wildest dreams he could never have imagined such a reception. His heart expands with gratitude and joy and begins to heal from the trauma of his long sojourn among the swine in a distant country.

But what about the elder brother? Let us for a moment try to see things from his point of view. He had remained at home. He had worked hard and wanted acknowledgement of his loyalty and good behaviour. His dad seemed to be taking him for granted. Apparently, he had never held a party for him – I doubt this!  When he sees his Father running out to meet his dissolute and wayward brother, he feel (understandably) aggrieved. And, when he hears the joyful sounds coming from the party his father is hosting for this younger brother, he is consumed with anger. It seems to him that he had been wasting his time staying at home and trying to do everything to please the Father.  Unfortunately, the elder son did not know his Father, even though he had been living with him. He had kept his distance all along. He didn’t want anything to change his perception of him as an upright but demanding man who expected nothing less than complete loyalty. So, when invited by the Father to share in the celebrations for the younger son’s return, he can’t join in.

This familiar parable challenges us to take a closer look at our image of God and how we relate to him. Do I believe that God is like a doting father who sees his lost son from afar and goes to meet him, totally oblivious of the utterly wasteful way he has lived his life. Would I gladly join in the party to celebrate the prodigal son’s return or be a ‘party pooper’ like the elder brother in the parable?