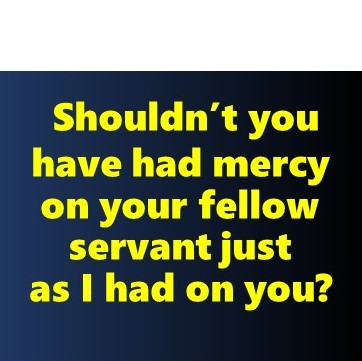 Today’s gospel follows on from the gospel of last Sunday, speaking about the need for reconciliation. Today’s gospel emphasizes more directly the great need to forgive. In today’s parable, the king calls his servants in order to settle his accounts with them. The first servant owes the king the equivalent of 3 million Euros in today’s currency. This shows up the incredible generosity of a king who loaned such an immense sum knowing the servant would have difficulty in repaying it. Nonetheless, the king is prepared to risk it in order to help this servant. If the debt was not repaid, the servant would be thrown into prison until it was repaid. But the king goes even further when the servant begs for more time to pay. Amazingly, he feels so sorry for the servant that he cancels all the debt.

This reminds us of God’s great generosity, giving each of us so many talents and gifts. Even if we have misused them or squandered them, God is always prepared to forgive us when we turn to Him seeking forgiveness.

The servant whose debt was forgiven leaves the king’s presence and meets a fellow servant who owed him the equivalent of about 15 Euros. This was a pittance in comparison to what he had been forgiven by the king. And what does he do? He refuses to give his fellow servant the time to repay and even tries to choke him before sending him to prison.

The other servants were scandalized at what happened and told the king who now deals severely with the first servant. He reminded him that the very least he could have done was to forgive the other as he himself had been forgiven. Now he pays the price for such unforgiving behaviour.

The message of the parable is fairly obvious. God forgives each of us over and over again, as we turn to him for forgiveness, in proportion to our forgiveness of one another. Have we any other choice then in view of this than to forgive others who ask us to do so?

In the second reading from St. Paul to the Romans, we are told that the life and death of each one of us has its influence on others. Our Christian vocation is, among other things, to witness to God’s forgiveness to ourselves by doing the same for others. How can others know the forgiveness of God if they do not see us Christians practising it?

Forgiveness is at the very heart of who God is. Pope Francis said that another name for God is mercy! If someone we love does something hurtful our first [human] reaction may be anger but usually this gives way to forgiveness because of our love for the other. However, if someone we really don’t like does the same deed, it will be usually harder to forgive that person because we don’t have the same love for them as for someone close to us.

If we refuse to forgive someone, this will ‘eat into us’ and will rob us of that peace which Christ wishes us at every Mass: Peace I leave you, my own peace I give you….. We cannot experience God’s peace if we’re holding anger or hurt within us. We have to let go of it, even if we may never be able to forget what happened. But we can forgive… and sometimes we may never get any further than wanting to do so – but that is the first step and without the first step you’ll never make the second one.

If anyone had the right to refuse to forgive it was Jesus, hanging on the cross, unjustly condemned and crucified. We all know his reaction: ‘Father, forgive them for they know not what they are doing’.

‘Lord, you are always ready to forgive me if I turn to you. Help me to forgive others – and myself when need be – so that I may truly experience the peace you want for me in this life and in the life to come. Amen’

edited from a homily of the late Fr Jim Kirstein SMA