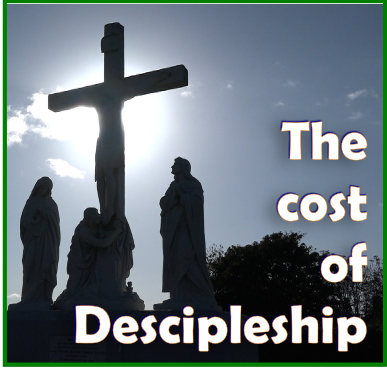 The Cost of Discipleship

The Jesus we meet in today’s gospel is far from the ‘gentle Jesus, meek and mild’ of our childhood prayers. Instead, we meet the tough, uncompromising prophet of God’s kingdom. Jesus pulls no punches when spelling out the conditions he requires of those who wish to be his disciples: ‘If anyone comes to me without turning his back on his father and mother, his wife and his children, his brothers and sisters, indeed his very self, he cannot be my disciple. Anyone who does not take up his/her cross and follow me cannot be my disciple’ (Lk 14:25-26).

It is well to recall the context in which Jesus made these statements. He had set his face resolutely towards Jerusalem and was well aware of the fate that awaited him there: rejection, betrayal, and death on a cross. And he wanted his disciples to be under no illusions about what lay ahead of them if they continued to follow him. It is clear that many (perhaps all) of them entertained expectations of earthly power and glory (cf. Lk 22:24-30). It is also clear that his words made little impression on them until after his death and resurrection. Only then, enlightened and empowered by the Spirit, did they fully embrace the challenges of being disciples of their crucified and risen Lord.

But what about us, the disciples of Jesus living in the 21st century? Surely Jesus does not expect us to take these harsh demands seriously. They seem altogether preposterous, completely out of kilter with the dominant values of our time and culture – security, comfort, human flourishing, and the support of family and friends.  Indeed, we may feel inclined to respond to Jesus in the words of American tennis legend, John McEnroe: ‘you cannot be serious’.  But Jesus is being very serious, and he did intend his words to be taken to heart by those who wished to follow him. There is no way of interpreting his blunt words to make them less challenging and more acceptable that is not simply escapist. Certainly, the intention of Jesus was not to make us miserable. As he himself tells us, he was sent by the Father to bring us life in its fullness (cf. Jn 10:10). He came to teach us how to love, and live as children of an infinitely compassionate and loving Father. But there is a price to pay if we wish to follow Jesus and imitate his example of a love that remained  steadfast and true to itself even in the face hostility and rejection. In the words of American poet, T.S. Eliot, genuine discipleship ‘costs not less than everything’ (Little Gidding).

The famous Lutheran pastor, Dietrich Bonhoeffer, got it right when he stated in his popular spiritual classic, The Cost of Discipleship, that the call to discipleship inevitably involves the cross: ‘The cross is not the terrible end to an otherwise god-fearing and happy life; it meets us at the beginning of our communion with Christ. When Christ calls us, he bids us come and die.’ Bonhoeffer was writing from personal experience. His fidelity to his Christian convictions led him to the ultimate sacrifice of his life. His involvement in a small Protestant resistance movement and conspiracy to defeat Hitler led to his incarceration and death by hanging in Flossenbürg concentration camp. Bonhoeffer describes discipleship a costly grace. ‘It is costly because it calls for obedience; it is grace because it calls for obedience to Christ. It is costly because it may cost us our lives; it is grace because only thus are we brought to new life.’

Today’s gospel message it not only profoundly counter-cultural; it falls within the category of things that lie beyond the grasp of our limited human understanding, as our first reading from the Book of Wisdom states. ‘Who can know the intentions of God? Who can divine the will of the Lord’  (Wis 9:13). The wisdom of the cross is a wisdom that is written ‘in the heavens’ (Wis 9:16). It is not the calculating wisdom of the worldly wise, but rather, as St Paul reminds us, ‘God’s foolishness [which] is wiser than human wisdom, and God’s weakness [which] is stronger than human strength’ (1 Cor 1:25). Like Bonhoeffer, Paul is speaking from personal experience. In our second reading today from his Letter to Philemon, he refers to himself as ‘an old man… still a prisoner of Jesus Christ’ forced to wear chains (Phil 9). Far from making him embittered, Paul’s years in prison matured him as a disciple and apostle of Christ, enabling him to imitate more closely the tender and compassionate love of his Master, as this short reading clearly illustrates.

Our following of Jesus today may not lead to physical death or to imprisonment but, if it is genuine and not just wishful thinking, it will involve the cross in one form or another. For those living in a post-Christian secular culture, perhaps the word of the British journalist, Philip Toynbee, are apposite: ‘Those who are trying to live Christian lives today are faced, not with martyrdom, not even with hostility, not even with contempt. The are faced with the deadly indifference of their fellow men and women, lightened only by an occasional burst of amused curiosity’. So, let us pray in the words of St Richard of Chichester for the grace ‘to see Christ more clearly, follow him more nearly, and love him more dearly, day by day’.