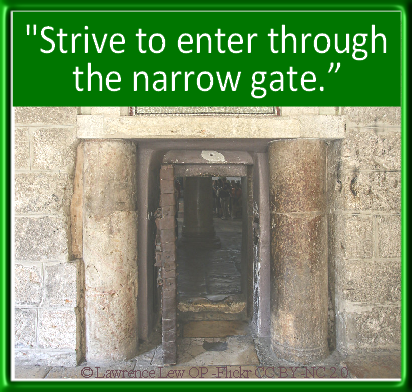 Entering the Kingdom of God through the narrow gate

There is a double-edged message in today’s readings. On the one hand, we are told that the blessings of God’s kingdom are for all peoples, not just a select few. On the other hand, we are warned not take for-granted that we are ‘on the inside track’ and have a pre-booked place at the royal banquet. Rather, we should try our best to enter ‘by the narrow gate’ (Lk 13:22), that is, to keep our minds and heart focused on Jesus and follow his example.

Our first reading from the prophet Isaiah presents us with an appealing image of the restored Temple of Jerusalem as a centre of pilgrimage for all the peoples of the world: ‘I am coming to gather the nations of every language. They shall come to witness my glory’ (Is 66:18). This image reflects an inclusive vision of salvation which counters the often exclusive attitudes of religious groups who imagine that they, and they alone, are assured of salvation. In the past, Catholics were accused of that attitude. However, as the Second Vatican Council clearly affirmed, God wills the salvation of all peoples. All are invited to share in the heavenly banquet: ‘And people from east and west, from north and south, will come to their places at the feast in the kingdom of God’ (Lk 13:29). Christ gave his life on the Cross not just for some, or for many, but for all. As the body of Christ and sacrament of the kingdom, the Church is called to be a welcoming, inclusive community, open to all peoples. Whenever its members adopt an exclusive mindset or display manifest bigotry they are betraying that vocation.

In today’s gospel from Luke, Jesus is approached by a fellow Jew who raises a question about the number of those who will be saved: ‘Sir, will there be only a few saved’ (Lk 13:22) – not a question that Jesus was likely to answer. However, as with other questions of this kind, it provides him with an opportunity to clarify the nature of God’s Kingdom. This Kingdom does not operate by the standards of the world. It’s not who you know that matters, nor the number of brownie points you may have amassed that will impress God. In all probability the man who put the question to Jesus was convinced that only members of the Jewish race would be saved, and that, even among them, only those who were law abiding. The Pharisees with their strict observance of the Mosaic Law would be first to gain entry. Gentiles (pagans) would have had no chance, while sinners, prostitutes, and the rabble who knew nothing of the Law, would have had little hope. In his response to the question put to him, Jesus warns his listeners not to take their status as ‘heirs to God’s kingdom’ for-granted. They may be in for an unpleasant surprise when they knock at the door of the banquet hall and find themselves turned out while people they least expected are given entry. Don’t be surprised, warns Jesus, to find that ‘there are those now last who will be first, and those now first who will be last’ (Lk 13:30).

A few years ago a more personal form of the question posed in today’s gospel was put to Pope Francis during a question-and-answer session with youngsters in one of Rome’s parishes. A young boy, Emmanuel, wanted to know if his recently deceased dad, an unbeliever, was in Heaven. When the time came for him to pose his question to the Pope, the boy burst into tears and couldn’t speak. Pope Francis called him to come close to him and whisper his question in his ear.  When he came the Pope enveloped him in a big embrace. With their heads touching, the Pope and the boy spoke privately to each other before Emmanuel returned to his seat.

Then, Pope Francis, with the boy’s consent, shared the his question with the audience. This is what the boy said:  ‘A little while ago my father passed away. He was a non-believer who had all four of his children baptized. He was a good man. Is dad in heaven?’’ ‘God is the one who says who goes to heaven,’ the pope explained. He then asked the children to think about what God is like and, especially, what kind of heart God has: ‘What do you think? God has a dad’s heart. And with a dad who was not a believer, but who baptized his children and was a good man, do you think God would be able to leave him far from himself? Does God abandon his children when they are good?’ The children shouted, ‘No.’ ‘There, Emmanuel, that is the answer,’ the pope told the boy. ‘God was surely proud of your dad, and you should be too, because he was a good man who wanted what was best for his children.’

As Pope Francis reminds us, we should leave to God the question of who will go to Heaven. It’s not a question for us to answer. What should concern us is what God wants from us? What gateway is he setting before us? Perhaps, like the poet Robert Frost, we are being invited to opt for the road ‘less travelled by’  and that may make ‘all the difference’.