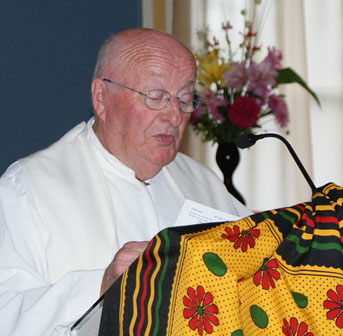 Nigeria, preached at the Thanksgiving Mass for the 1964 Ordination Class.

I would like to begin today by remembering the parents and families of our jubilarians. “A good tree bears good fruit.” (Mt. 7:17)

When you were in Africa they prayed for you, and lit many a candle for you in your home Churches. Today they rejoice with you and continue to pray for you.

We congratulate this class of 1964. It was a special class. Their contribution to the spread of the Gospel and to the Society is unique in the Irish Province – included among them are a two-term Superior General; a two-term Provincial Superior; a Bishop; a Vicar General; a number of Regional and Deputy Regional Superiors and a Society Superior.

Others worked in Universities and in Seminaries, and made a huge contribution to the formation of future priests, both SMA and diocesan. One man worked in the same Minor Seminary for 24 years, and trained many future priests and a number of future bishops.

Another member of this class produced books on catechetics, translated into several languages. Another has produced a number of books on the Catholic Faith, a seminary text book on priesthood, and is working on another.

They have worked across Africa, from Liberia to Nigeria, to Kenya, Zambia, South Africa and even to Australia. Three are still in Nigeria.

Some took up appointments in Ireland and worked in promotion and in parishes.

As pointed out, some were called to carry the burden of prominent positions.

But we must never forget that Africa was converted by the unanimous, and often forgotten missionaries, labouring away year in year out, often to the detriment of their own health, beating no drum, but the silent drum beat of a heart, beating for the love of Mission and of God. These people are the unseen roots, that sent nourishment upwards, feeding and supporting the frail and delicate tree of SMA Mission, that later blossomed and was heavy with fruit.

We look at the fruiting tree today, & forget the unseen roots. But no roots no tree.

On right we picture Jubilarian Fr Willie Cusack who served for many years in Nigeria and Zambia as well as in Blackrock Road, Cork.

There is a proverb: “when an oak tree falls, the whole forest will hear it, but hundreds of acorns are planted in silence, by a gentle breeze.”

Countless acorns of the Gospel were planted by this class and by other SMAs in the gentle silent breeze of the Spirit of God.

In Genesis Jacob dreamt of a ladder from earth to heaven. I quote: “A ladder standing on the ground with its top reaching to heaven.” (Gen.28:12)

We too have our own SMA ladder, a ladder of bones.

Read the Necrology of our early days in Africa. They died in the prime of life, some as young as 25 or 30, and are buried in Africa. Even in the life time of this class of ’64 a few new rungs were added to the ladder. Fr Fergus Conlan, from this very class, is buried in Zambia. Others, among them John Hannon in Kenya, Kevin Carroll in Nigeria, Connie Griffin in Nigeria [as recent as 2007] lie in the soil of the countries they worked in.

These, and other SMAs and OLAs, buried in Africa, their flesh and bones have become the very soil of Africa, enriching it, they are Africa. The hardships and sacrifices of these early days of SMA Mission has been blessed and rewarded by God. Fr Con Murphy (left) and Bishop Patrick J Harrington (right) have served in 7 different countries, as well as in leadership positions in the Society. Fr Murphy served in Nigeria, South and Kenya as well as serving as Irish Provincial Superior for two terms; Bishop Harrington served in Australia, Liberia and Kenya and two terms as SMA Superior General based in Rome. For nearly 12 years he served as Bishop of Lodwar, Kenya.

I can only speak of Nigeria, and I have seen the success story from Warri on the Atlantic Ocean in the South, to Kano and the sands of the Sahara in the North. We all reaped the harvest of SMAs who laboured before us.

“I sent you to reap a harvest you had not worked for….
You have come into the rewards of their troubles.” (John 4:38)

You too planted Gospel seeds that later SMAs and indigenous priests reaped.

Let me quote from John of Salisbury, a 12th century monk. What he said is still valid.
“We are sitting on the shoulders of giants,
we see more things,
and things that are more distant than they did,
not because our sight is superior,
or because we are taller than they were.
No, but because they raised us up,
and by their stature, they added to ours.”

As some of this class are retired, or thinking of retirement, I know, you will continue to be missionaries, by your prayers, and way of life, like St Theresa, Patroness of the Missions from her convent in Lisieux.

“Let us run with perseverance, the race that is set before us.” [Hebrews 12:1]

You have run well, with a track record of 50 years behind you. As the baton of Mission is now being handed over to other parts of the wider SMA, they will continue the journey, across the Mission fields of tomorrow.

“Have you not a saying, four months and then the harvest? Well I tell you, look around you, look at the fields, already they are ripe for harvest. Already the reaper…. is bringing in the grain of eternal life.”

Into the barns of God may we all be gathered in. Amen.