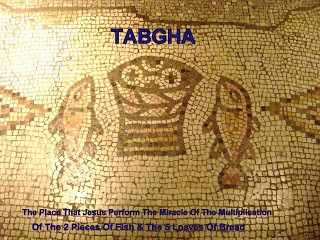 Today’s gospel recounts the miracle of the multiplication of the loaves and fishes. It’s a story that easily captures the imagination. It was one of the bible stories that impressed me when I was in primary school, but for the wrong reasons. I pictured Jesus as a great magician who, instead of making things disappear or pulling rabbits out of a hat, could take something small and increase it many times over. To a ten-year-old schoolboy, this seemed hugely impressive. However, although the story made a lasting impression on me, I had missed its meaning. The multiplication of the loaves and fishes is not the act of a master magician, but a miracle of divine compassion and generosity that manifests what God’s reign on earth is all about. Some years ago I came across a story that illustrates the true meaning of this miraculous event.

One day a village woman was surprised to find a well-dressed stranger at her door asking for something to eat. ‘I’m sorry,’ she said, ‘but I don’t have anything in the house right now’. ‘Not to worry’, said the stranger, ‘I have a soup stone in my bag; if you allow me to put it into a pot of boiling water, I’ll make the most delicious soup in the world. ‘Bring me a large pot, please’. The woman brought him the pot. He filled it with water and dropped in the stone into it. As he put the pot on the fire, the woman whispered the secret of the soup stone to a neighbour.
Soon all the neighbours gathered to see the stranger and his wonderful soup stone. When the water began to boil, the stranger tasted a spoonful and exclaimed. ‘Very tasty! All it needs is some potatoes.’ ‘I have potatoes at home’ shouted one woman. ‘Bring them’ said the stranger. In a few minutes, she was back with a large number of sliced potatoes, which were deposited in the pot. After a few minutes, the stranger tasted the soup again and exclaimed, ‘delicious! If only we had some vegetables it would be perfect’. So one of the neighbours rushed off home and returned with a basket of carrots and onions’. After a few minutes more, the stranger tasted the soup again. ‘Almost perfect!’ he said, ‘it just needs some salt and spicy sauce. ‘Right here said the housewife’. ‘Bowls for everyone’, shouted the stranger, so off rushed the neighbours to their homes in search of bowls. Some even returned with bread and fruit.
Then they all sat down to a delicious meal while the stranger handed out large helpings of his incredible soup. Everyone felt relaxed and happy as they laughed and talked and shared their very first common meal. In the midst of all the merriment, the stranger slipped quietly away, leaving behind the miraculous soup stone, which they used any time they wanted to make the loveliest soup in the world.

That Jesus could feed an enormous crowd of people with just five loaves and two fishes is as seemingly impossible as the stranger making soup from a stone. But nothing is impossible for God, and nothing is impossible when people are touched by the spark of divine compassion and generosity. The miracle of the multiplication of the loaves and fishes expresses in practical terms the mystery of abundant life symbolised by the parables we have heard on previous Sundays: the parable of the seed-producing a hundredfold; the mustard seed and its extraordinary growth, and the leavening of three measures of flour. The Lord of the harvest has showered us with an abundance of his gifts, more than we would ever ask for, or need. It is our hearts that need to be touched and transformed by the elixir of divine compassion and generosity so that we share what we have received with those in need, and everyone has more than enough.
At the end of Mass, St Augustine was accustomed to reminding the assembly of the meaning of what they had just celebrated by saying to them: ‘Be what you eat.’
So let us pray: “Lord, as we receive the Eucharist today may we be your loving and caring presence in our world today. May we be motivated by joyful gratitude for what we already have and by a constant concern for the needs and concerns of others. May we attend not only to our own hunger but to the hunger of those in our world who suffer from empty stomachs, aching hearts, and lonely spirits, constantly crying out for help.”