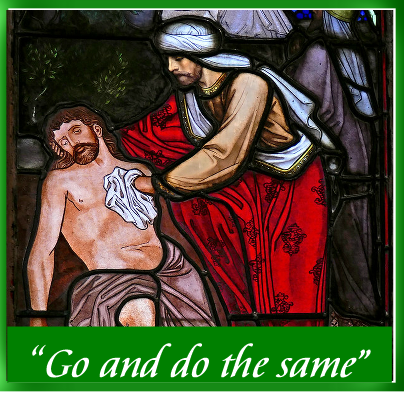 Today’s gospel from Luke recounts one of the best known and most loved stories in the Bible – the parable of the good Samaritan. Unfortunately, we are so familiar with this parable that it may not have the impact on us that it would have had on those who first heard it. At one level, it is an edifying story about an act of kindness to an unfortunate victim of violent robbery. Indeed, Jesus is challenging us to imitate the compassion and care shown by the good Samaritan to a fellow human being in dire need of help: ‘Go and do the same yourself’ (Lk 10:37). In the words of Glen Campbell‘s hit song, Jesus is calling on us to ‘try a little kindness and overlook the blindness of the narrow-minded people on the narrow-minded streets’.

I had a personal experience of such an act of kindness about eight months ago, when I had a nasty fall on the streets of Ballintemple, Cork City. Rushing to catch a bus, I tripped on the kerb of the footpath and fell on my face, causing some damage – it looked much worse than it was. I was immediately surrounded by people who saw my fall and reached out to help me. One young man with a medical background got off the bus as it was about to leave and administered first aid. Another woman called the Superior of our House in Blackrock Road, who phoned for an ambulance. Several hands then lifted me off the street and led me to a nearby pub, where I was given a refreshing cup to tea while awaiting the ambulance. Later, as I was recovering from the fall, one of the women who had come to my help called in to our house, inquired how I was, and left me a box chocolates. The kindness of these ‘good Samaritans’ made a deep impression on me, reminding me of the spontaneous kindness of people I had never met before in my life. Thank God for them!

There is a deeper meaning to the parable of the Good Samaritan which emerges only when we look at the context in which Jesus told this famous story. Jesus is approached by an educated Jew, a lawyer, or expert in the interpretation of the Torah (the Law of Moses). We are told that he wants to ‘disconcert’ or ‘test’ Jesus. So he asks Jesus a question to which he knows the answer very well: ‘Master, what must I do to possess eternal life?’ (Lk 10:25). Jesus, aware of what was in the lawyer’s mind, responds by asking him a question: ‘What is written in the Law? What do you read there?’ (Lk 10:26). The lawyer, as we would expect, answers correctly, citing the double commandment at the heart of the Torah: love of God and love of neighbour. Our first reading today echoes this commandment, recalling Moses’ injunction to the people of Israel ‘to obey the voice of the Lord your God’ and keep his commandments (cf. Dt 30:10). Jesus acknowledges the lawyer’s answer, saying, ‘You have answered right. Do this and life is yours’ (Lk 10:28).

The lawyer might, then, have then gone on his way and we would never have had the story of the Good Samaritan. But he wanted to test Jesus further and also to justify himself. So he puts another question to Jesus: ‘And who is my neighbour?’ (Lk 10:29). This was a hotly debated question at the time of Jesus. For most Jews, their neighbours, whom the Law commanded them to love, were their fellow Jews, those who belonged to the Chosen People. Outsiders, like the Samaritan in the story, were not considered neighbours and were despised rather than loved. Jesus does not respond to the lawyer’s question with a definition of neighbour, as he (the lawyer) would have expected. Instead, Jesus turns the question on its head and, instead of answering it, tells a story which illustrates what being a neighbour means. And the unlikely hero of Jesus’ story, the model of neighbourliness, is not the Priest or the Levite, highly respected members of the Chosen People, but an outsider, a Samaritan.

In this story, then, Jesus is answering a question he was not asked, namely, who are God’s people? And the answer Jesus gives is: the good Samaritans of this world, the people who embody, in acts of loving kindness, the compassion and care of the God of love. In this story, then, Jesus is challenging the lawyer, as he is challenging us, to look beyond the narrow frontiers of our official Religious Traditions, with their divisions and exclusions, and embrace the universal reign of God’s love, from which no one is excluded. Indeed, the despised outsiders, the good Samaritans, may prove themselves more exemplary models of God’s faithful people, than those who consider themselves as ‘ saved insiders’. The lawyer in today’s gospel reading may not be far from the kingdom of God for, when asked by Jesus, he acknowledges that, of the three characters in Jesus’ story – the Priest, the Levite and the Samaritan – it is the Samaritan who proves himself a neighbour to the unfortunate victim of violent robbery. The reading ends with Jesus inviting him, as he is also inviting us, to imitate the example of genuine neighbourliness. So let us pray: Open our eyes to see the need of others and make us channels of your compassion and care for them. Amen.