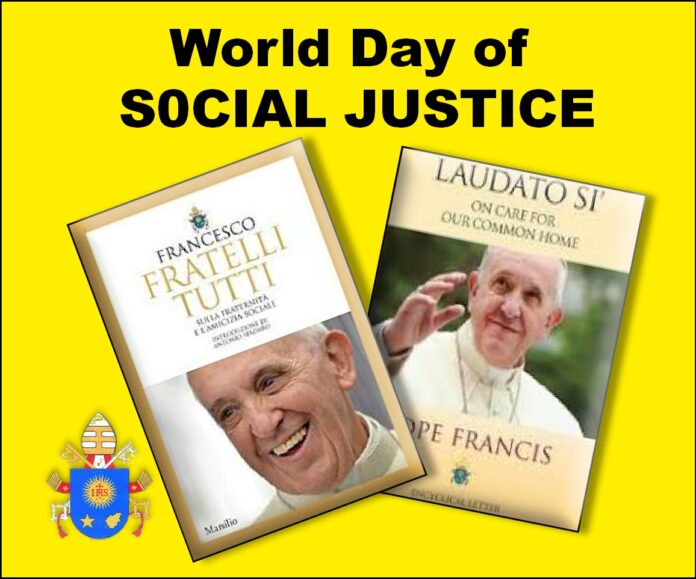 The United Nations’ World Day of Social Justice is observed each year on February 20th.  The theme for 2021 is; A Call for Social Justice in the Digital Economy. This year’s commemoration supports efforts by the international community to search for solutions to achieve sustainable development, poverty eradication, the promotion of full employment, universal social protection, gender equality and justice for all.  This year the focus is on fostering dialogue and actions needed to overcome the digital divide, provide decent work opportunities and protect labour and human rights in the modern era of digital technologies.
https://www.un.org/en/observances/social-justice-day

What is Social Justice?
In civil society Social Justice is understood as “the equal access to wealth, opportunities, and privileges within a society”.  The concept arose in the early 19th century during the Industrial Revolution.  It aimed to create more egalitarian societies and remedy capitalistic exploitation of human labour.  Because of the stark stratifications between the wealthy and the poor during this time, early social justice advocates focused primarily on capital, property and the distribution of wealth.  Later social justice expanded from being primarily concerned with economics to include other spheres of social life and the environment, race, gender and other causes and manifestations of inequality.  https://www.pachamama.org/social-justice/what-is-social-justice

Social Justice and the Church
In the Church Social Justice is more than doing what is right or treating each other and the world we live in correctly – it is a matter of faith – of doing what God wants.  In Laudato Si Pope Francis is very clear on this point when he states “Christians in their turn realize that their responsibility within creation and their duty towards nature and the Creator are an essential part of their faith” (par 64).  Faith calls on us to live in a particular way – to live justly.  In essence working for social justice is an effort to make real in our world what we pray for when we say, “thy Kingdom come, thy will be done”.  This means making the world a place where human life and dignity are respected, where values such as the Common Good, Solidarity and Participation are the principles that guide our interaction and relationships with each other and with the world we live in.

However, the reality we encounter each day is very different – hunger, war, slavery, poverty and environmental degradation are prevalent in our time.  The rights of many people are denied and they lack basic needs such as food, water, medicines and shelter.  There are great inequalities due to greed, corruption and exploitation.

Through its Social Teaching the Church speaks out against these injustices and points to solutions that aim to restore a right relationship between God, man and the created world.  The origins of Church Social Teaching are clear in the scriptures – the Old and New testaments are full of calls for just treatment of neighbours, the strangers who live among us, widows and orphans.  Church teaching down through the ages has reflected the Gospel call to ‘love one another as I have loved you’ and proclaimed respect for the inherent dignity that being made in the image and likeness of God bestow on every human being.

However, it was only relatively recently, in the late 19th Century, that the Social Teaching of the Church began to be systemised, beginning with the Encyclical Rerum Novarum of Pope Leo XIII.  Since then there have been a long series of documents and Encyclical letters each responding to the signs of their times. These have included issues such as workers rights, capitalism and communism, aid to developing countries, rights and duties, human dignity, the common good, peace etc.  In all the Church has stated what it teaches and pointed to just solutions to the issues addressed.

The two most recent Encyclicals, published by Pope Francis – Laudato Si and Fratelli Tutti have a social justice focus and follow the example of their predecessors.  They highlight and address the major environmental and social crises of our times.  Laudato Si addresses the ecological crisis that is reducing our Common Home to a “pile of filth”.  Fratelli Tutti opens with a chapter called “Dark Clouds over a Closed World”.  It describes an inward-looking and xenophobic world in which the meaning of democracy, freedom and justice have been distorted and where there is a resurgence of conflicts, resentment, divisions among peoples and indifference towards the weakest.

To respond to these crises Laudato Si proposes an Integral Ecology – the social and environmental problems facing our world cannot be dealt with separately or by individual countries.   Fratelli Tutti hammers this point home with its focus in on “fraternity and social friendship“.  It encourages universal brotherhood and calls for a culture of encounter with one other and with our natural environment.  Laudato Si rejects the “technocratic paradigm” which “tends to dominate political and social life”.  This worldview which has shaped our present economic, political and social model is based on an erroneous belief that technological progress and market growth can provide answers to all problems environmental and social.  Laudato Si tells us that this worldview not only risks damaging nature and humanity but also encourages exploitation and inequality (par 109).  The more recently published Fratelli Tutti takes up the theme of inequality and speaks of how our current political and economic models diverge from the principles of fraternity, social friendship and the common good.  It says that there needs to be change, people must come first – politics must have a strong emphasis on the universal destination of goods and the common good.  There is a need for multilateralism – not blind nationalism – a need to build bridges not walls.  “This requires us to place at the centre of all political, social and economic activity the human person, who enjoys the highest dignity, and respect for the common good.” (par 232).

Paradoxically, World Day of Social Justice is a reminder to us all of the great level of social injustice and inequality that exists in our world today and of the need for individual, collective and international action to overcome it.  The social teaching of the church is a clear guide to living justly and to living our faith.  It also points to ways, perhaps the only ways, that the global crises facing our world in these times can be overcome.
“Thy  Kingdom come thy will be done.”