Home News UN Committee for the Rights of the Child – Review of Ireland.

On the 24th and 25th of January the UN’s Committee on the Rights of the Child will review Ireland during its meeting in Geneva. A joint submission made by the OLA Sisters, other congregations and the SMA will contribute to this review of Ireland which examines how well the Convention on the Rights of the Child is being implemented in Ireland and the steps taken by Government to ensure that every child’s rights are protected.

This joint submission which will form part of the input to the review is a collaborative effort between the Christian Brothers European Province Advocacy Office (http://www.edmundrice.eu/), the International Presentation Association (https://globalpres.org/), the Cork Migrant Centre (https://corkmigrantcentre.ie/), the Presentation Brothers Ireland (www.presentationbrothers.org), the Sisters of Our Lady of Apostles  (www.olaireland.ie)  and the Justice Office of the Society of African Missions (www.sma.ie). 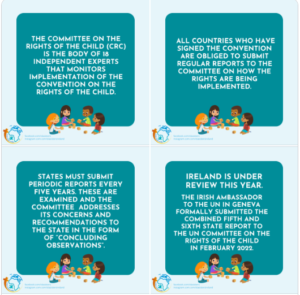 The submission outlined concerns and recommendations across five areas of concern:

The UN Convention on the Rights of the Child
The UN Convention on the Rights of the Child is a comprehensive, internationally binding agreement on the rights of children, which was adopted by the United Nations General Assembly in 1989. Ireland signed the UN Convention on 30 September 1990, and ratified it on 28 September 1992. This means that the Irish State committed itself to promote, protect and fulfil the rights of children, as outlined in the UN Convention. The Convention defines a child as a person under the age of 18 years, and acknowledges the family as the fundamental unit of society. It stresses the role of parents as the primary care-givers with responsibility for the up-bringing of their children and obliges governments to support parents in fulfilling their essential role.

Steps in the Review
Civil society stakeholders submitted written reports to the Committee in 2020 on the situation of children’s rights in Ireland. These reports informed the List of Issues Prior to Reporting (LOIPRs) prepared by the Committee for Ireland.