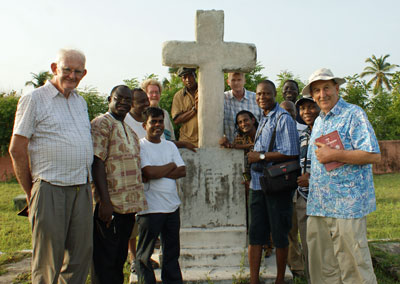 Situated off the south west coast of Nigeria, not far from the great megacity of Lagos, here – in 1862 – began the story of evanglization by the SMA in Nigeria with the arrival of an Italian SMA priest, Fr Francesco Borghero.
Our Regional Superior for southern Nigeria, Fr Tim Cullinane SMA, reports on the visit he, and 13 SMA colleagues, recently made to this ‘seedbed of the faith’ in Nigeria. On right of our picture is Fr Eddie Hartnett SMA and on left is Fr Cullinane. SMA priests from Ireland, India and five African countries made up the group – truly the “new face” of the SMA.

During Easter week 2010 fourteen SMA priests went on a two day visit to Badagry Slave Port and Topo Island, in the south west corner of Nigeria.

Our welcoming host and guide was Fr Eddie Hartnett SMA (from Ballinlough, Cork City), a missionary in this part of Nigeria since 1967. Many thanks to Eddie (pictured left) for the preparation and time he took to give us all a wonderful experience over two days, one on dry land and the second on the island itself.

Our first stop was the Slave Market in the centre of Badagry which opened in 1502 and functioned until 1808. Three hundred slaves were sold each market day. They were sold by barter for canons, gunpowder, mirrors, gin, cowries and umbrellas. A decorative umbrella could be exchanged for 40 slaves.

We then followed the road from the slave market to the open sea where the ships waited for their wretched cargo. Even for us in the heat of the afternoon sun it was a torturous but very moving journey as we followed the path trodden by nearly three million slaves on their way to the waiting ships, past the cistern where they got a potion to drug them for what was to come, through the Gate of No Return to the waiting ships that were to bring them to “the new world”. Picture shows Fr James Owusu-Yeboah SMA (from Ghana and PP of St Joseph’s Parish, Gowon Estate, Lagos) and the author, Fr Tim Cullinane SMA. From there we went to a more uplifting place: the house where the first Anglican missionaries (CMS) resided when they arrived in Badagry in December 1842. There we heard read a very moving letter from a group of returned slaves who had experienced Christianity during their time as slaves and found no Christian presence in Badagry when they returned home. This letter, written on 2nd March 1841, was sent through the Governor of Lagos to the Archbishop of Canterbury asking him to send some missionaries  to “bring light into this place of darkness.” The arrival of the Rev Henry Towsend was an answer to their plea.

A Methodist Minister, Rev Thomas Birch Freeman had arrived three months before the CMS missionaries (September 1842) and we were shown the place, now overshadowed by a giant mosque, where he preached the first sermon after his arrival.  We were also shown  the room where Samuel Crowther produced the first translation of the Bible into Yoruba in the years 1845-1846.

It was then on to the Brazilian quarters where Fr Francesco Borghero SMA said the first Mass in the Badagry area on 2 October 1863. From this we realised that the Methodists, closely followed by the Anglicans had arrived in Badagry nearly 20 years before the Catholic Church. Fr Borghero had already visited Lagos and celebrated the first Mass in that city on 9 March 1862, having passed through Badagry on his voyage.

We then made visit to pray at the grave of Fr Joseph Carew SMA at the side of the Sacred Heart Church. Fr Carew died on 25 May 1973. We then set off get the boat to cross the lagoon to Topo. On the way we were intercepted by a Police launch for not wearing the official life jacket and escorted to the police post on the shore. After about and hour of negotiating we were on our way again to Topo, suitably and correctly attired!

One of the major challenges the early missionaries faced was the shortage of funds for their work. From 1859 on the then SMA Superior General, Fr Augustin Planque, frequently answered missionaries’ complaints about the shortage of money with an exhortation to explore the possibility of finding local resources. He rightly argued that, for a mission to be solidly established, it must at least begin to support itself. So in the early 1870’s the SMA along the coast from Lome (Togo) to Lagos (Nigeria) sought a place to have a farm, which would generate some local income. Fr Baudin SMA and Brother Elias arrived on Topo Island in July 1876 to begin the farm there. Three months later, Fr Poirier arrived. A secondary aim of the Topo mission was to provide a home for orphans and freed slaves. They attended a school which the missionaries established and it was hoped that some of them would embrace the faith and form the nucleus of a Christian village. With so many demands for missionaries it was difficult to keep Topo running smoothly. But with the arrival of Fr Camille Bel the farm was at last heading for commercial success. He was a former soldier in the Franco-Prussian War. Fr Bel saw the potential for a coconut farm on the vast amount of land given by the Government to the Catholic mission, planting thousands of trees wherever there was available space! He also raised cattle, sheep and goats, selling them in the meat markets of Badagry and Lagos, just across the lagoon.

SMA missionaries remained there until 1962 when the island was abandoned. The coconut farm was unable to provide sufficient income for the people and so they went to the mainland seeking work. The Missionary Sisters of Our Lady of the Apostles (OLA) came in 1890 and served there for 70 years. The island is 6km long and 740 metres wide. One was saddened to see the decrepit state of the original Chapel, Fathers’ House, the Convent and Teacher Training College. The only thing that seemed to have survived the test of time was the coconut plantation (see picture below), planted by the early missionaries, the produce of which did so much to build up the Church in Lagos and the Minor Seminary at Oke-Are, Ibadan. Our 1953 picture shows some of the cattle herd, which provided milk for the school and part of the Coconut farm in the background. Interesting to note that the priest in charge of the cattle was wearing his soutane as he went about his work, with some of the pupils looking on from the Calvary

In the beginning, the Society policy for Topo was that the SMA personnel should work in groups of three: one man fully engaged in learning the language, another doing pastoral work and  the  third on buildings and maintenance.

The most moving place was  the cemetery where a number of OLA sister and SMA priests and brothers are laid to rest. A moving reflection by the late Sr Maura Hayes OLA, when a group of OLAs gathered a number of years ago to remember their sisters who had worked there, was read. Many of them died in their late twenties or early thirties. In her reflection Sr Maura had said: “these sisters had dreams and we are here today because of that dream and must ask ourselves, ‘what is our dream today?” During this Easter week, celebrating the victory of Jesus over the tomb, was it not also a good question for each of us to ask – no longer only Irish SMA’s but Indian, Kenyan, Nigerian, Beninois and Togolese. The tour or pilgrimage concluded with our return to the mainland to join the Catholic community in the ultra modern Church of the Holy Family at Ajara, built by Fr Hartnett.

During the Mass it was pointed out that what was sown in tears by the early missionaries is now bearing much fruit in the Catholic Church in Badagry and for the SMA.

A few statistics shows the impressive growth in the Church: In 1984, the entire area was one parish, served by two SMA priests (Fathers Eddie Hartnett and Eamonn Finnegan).

Today we have have 3 parishes with 51 churches, served by 8 priests: seven Nigerian and 1 SMA – the ‘ever-present and ever dynamic’ Fr Hartnett!!

Fr Finnegan (pictured left) is now in charge of the rapidly expanding parish of Our Lady, Mother of Perpetual Help, Ajah, Lagos. He is building a multi-million Naira Church there as well as caring for two outstations. He is assisted by a diocesan priest.

In the Badagry area, vocations to the priesthood and religious life continue to grow. Already, there are six priests from the area (3 of these are members of the SMA) as well as three Religious Sisters. Two of the latter are members of the OLA and the third is a member of the diocesan congregation, the Sisters of the Eucharistic Heart of Jesus, founded by Archbishop Leo Hale Taylor SMA.

The first of our three SMA priests, Father Julius Temuyi SMA, was ordained in 1998 and is now in charge of a parish in neighbouring Benin Republic. Fr Benedict Tinka, worked in the Central African Republic after his ordination in 2008 is now involved in training SMA seminarians in Ghana. The last of the three, Fr Emmanuel Zinsu was ordained in 2009 and is in parish work in the Ivory Coast. Fr Emmanuel is very familiar with that country as he did his Pastoral Year and his Theology studies there. There is also a very dynamic SMA Mission Support Group in the parish. In spite of the horrors of the slave trade and the struggles of the early missionaries as we left the place we could not but say: