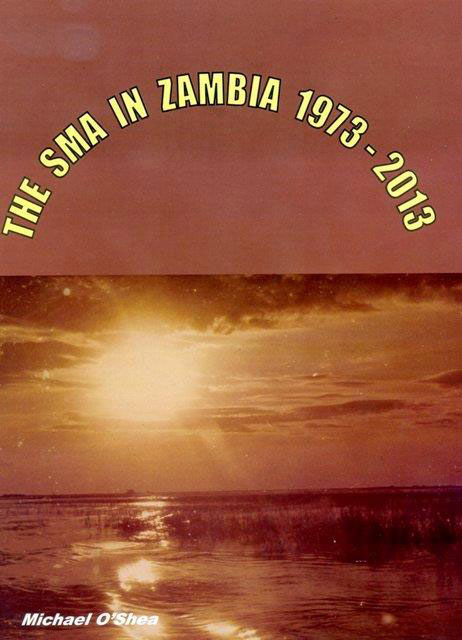 “Fr Michael O’Shea, author of Missionaries and Miners, has recently published a new book, The SMA in Zambia 1973-2013. The history is set against the background of the development of the church where the ‘SMAs’ worked: the Copperbelt, Northwestern Province and, more recently, Lusaka and Kabwe.

As an Ndola seminarian myself I was most taken by the chapter on Bishop Noel O’Regan, of Solwezi and of Ndola, which explains a lot about the causes of his untimely resignation and departure in 2009.

The book is not just about the SMA. There are extensive accounts of for instance, the lives and times of Bishop Noel’s predecessors, Nicholas Agnozzi and Dennis de Jong of Ndola, and Abdon Potani of Solwezi.

Also of interest are accounts of such as the bizarre incident in Malawi’s Kachebere Major Seminary in 1973 which led to the foundation of Zambia’s national seminary St Augustine’s, Mpima, and St Dominic’s in Lusaka; the background to Pope (now Saint) John Paul II’s visit to Zambia in 1979; the drama and conflict surrounding the rise of indigenous singing and drumming in church and, most importantly, the rise of indigenous church leadership in Zambia.

In 1973, when the first seven members of the SMA, all Irish, arrived the Zambian church was practically exclusively run by expatriates, in 2013 it was practically exclusively run by Zambians. This forty-year period was one of dynamic growth for the young Zambian church; it was also a time of indigenization for the SMA which now has thirteen Zambian priest members and a Zambian Regional Superior.

The author, a staff member of St Augustine’s, is now the seminary’s longest serving member and the last white man on the staff. Another SMA pioneer, Paraic Kelly, was spiritual director up to May and, not far away, Bishop O’Regan is chaplain of St Paul’s Secondary School. The history, 218 pages, with photographs, map, comprehensive index and annotated list of all eighty ‘SMAs’ who worked in Zambia, was printed by Mission Press, Ndola, in April 2014.” [Review written by Enoch Kapambwe, St Augustine’s Major Seminary, Mpima, Kabwe, Zambia].

Some comments from the SMA Communications Director, Martin Kavanagh, who kindly received one of the first copies of the book to reach Ireland.

The SMA in Zambia 1973 – 2013 is well-produced and the photos are, for the most part, quite clearly reproduced. It’s an enjoyable read but there are several points which Fr Michael should address when reprinting this work.

Footnotes are presented in a way which make it hard to follow the flow of the narrative. In some cases they it was necessary that they went onto the following page – but to the top of it? A new way for presenting footnotes (piece on IEME missionaries, pages 3 and 4) or, in one case at least landed in the middle of the next page (confreres – page 9 and page 10). Such things shouldn’t happen. And the fact that these happened so early in the book might indicate that an editor was not up to the task.

Fr Michael’s use of only first names in some places – Mick sr and Mick jr (page 24) and the use of first names for the bishops had me turning back and forth to clarify who the author was referring to. This causes no problem for people well versed with the hierarchy and SMA personnel / Tuam clergy in Zambia but for an ‘outsider’ seeking to get an overall picture of the 40 years of the SMA presence in Zambia it was ‘challenging’. On page 151 the author speaks of Bishop de Jong as a “frequent pilgrim to ‘St Mark’ (Deutschmark)” – I showed this paragraph to a lay person who had no idea what it referred to. It’s missionary speak for going to the German Aid agencies such as Missio who are very supportive of missionaries all over the world. Again, need to be a bit clearer for those not familiar with such matters.

There are some other points one could make about this work but, overall, it’s an enjoyable read for an ‘outsider’ despite the comments above. Hopefully a future edition will take note of the above and correct them. But well worth buying!