“The salvation of Africa and its children comes from African women who remain faithful to their mission as guardians of life and the family: we missionaries are witnesses”, according to Father Silvano Galli, of the Society for African Missions (SMA), on the occasion of International Women’s Day. “If Africa has not plunged into misery, but continues to move forward, in spite of all the misfortunes that have fallen upon it, in spite of wars, diseases, famines, in spite of widespread bad governance, this is largely due to the tenacity of women, their love and their commitment to life”, he continued. Fr Silvano was speaking to Agenzia FIDES from the SMA Formation Centre in Lomé, Togo. For many years, Fr Silvano was in pastoral work in the north of Togo, in Kolowaré but, in recent months, he has come to the capital to help train young Togolese seminarians who want to be SMA missionaries. “The African woman is a hidden but irreplaceable protagonist. Mothers of families do not abandon their homes, their children and their elderly, when the house burns down or the land is invaded by lawless and heartless people“. 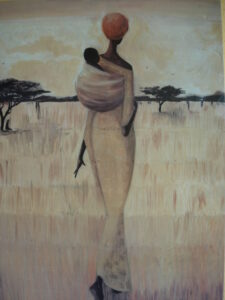 families, who raise their children and those of others, who defy armed gangs and face violence, even the one that most humiliates them, and who resist unarmed even when everyone leaves. Africa is saved thanks to those mothers who, once the emergency is over, still know how to find the paths of forgiveness and reconciliation so that life can continue, those mothers who are not afraid to go out into the streets to ask for justice and peace and a future for their children and siblings”. “The woman, with her ‘feminine genius’ has the ability to see far, to foresee and provide, to welcome, make life grow and promote life, not only human life, her ability to listen, to empathize and be sensitive towards each person, her ability to transform even suffering into a gift for life. This is the power of love placed by God in each woman. When the feminine genius joins the Christian faith, African women also become the pillars of Christian communities. Among these women we cannot forget the missionary sisters, women of God, who consecrate and sacrifice their lives for the promotion of women. They have been faithful to their choice to be at the side of women, of the sick, of the last on earth, in the name of Jesus Christ. They have put their feminine genius and all their energy, intelligence and heart at the disposal of the human and spiritual development of this continent. Like the Sisters of Our Lady of the Apostles, (OLA Sisters), present in Kolowaré to care for leprosy patients since 1942” (see Fides, 27/1/2018).

Father Galli concludes by highlighting the fact that in these terrible years “it was the women who saved hope in Africa and it will still be them, the African women who, if there is finally that African renaissance that everyone hopes for, will make the continent move forward into the future”.