Home Africa Nigeria The changing face of the SMA 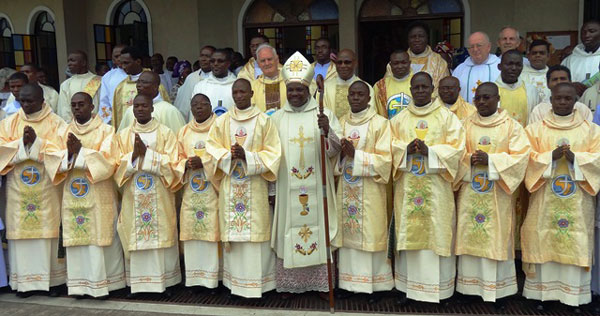 On Saturday 11th of May, nine deacons were ordained for the SMA at the SMA Formation House, Bodija, Ibadan by Bishop Emmanuel Badejo, Bishop of Oyo. From a Report prepared by Fr  Tim Cullinane, a long-time missionary in Nigeria, we give an edited account of this important event and also on the return to Ireland of several other SMA members. It was fitting that the deacons should be ordained by Bishop Badejo of Oyo diocese for this year his diocese is celebrating its Golden Jubilee. The seeds of faith in Oyo were planted by SMA missionaries who arrived there in 1886. Four of the early missionaries are buried beside the Cathedral in Oyo, all of them dying at an early age including Fr Benoit Venessy who died in 1886 after only two months in Nigeria.

In the course of his homily the Bishop spoke about the fact that we live in an age in which the Church is betrayed and brutalized not just by enemies from outside but by friends from within. Speaking directly to the deacons to be ordained he said, “I urge that your diaconate be a mission, not a career. It must begin at the altar of the Lord and in prayer but must not stop there. Look around and you discover too easily that far too many of us clergy today get it all wrong giving too much attention to ‘gains’ rather than ‘gifts’, to power rather than love… .Earlier this week, the Holy Father, Pope Francis, told the International Union of Superiors, ‘The men and women of the Church who are careerists and social climbers, who use people, the Church their brothers and sisters – whom they should be serving – as springboards for their own personal interests and ambitions are doing great harm to the Church. He had earlier in April told some newly ordained priests to remember that they are ordained for the things that pertain to God. Be pastors not functionaries, said the Pope. These are words which you need to remember as you begin your ministry. In the same vein I say to you brothers: stay focused. Stay with the great legacy and tradition of the Society of the African Missions. Be faithful to your charism and live like your founder.”

A large congregation gathered for the occasion, priests, sisters, family and friends and SMA supporters, some of them coming from as far away as Kano, Asaba, Lagos and the Republic of Benin. In Nigeria alone, there are now 37 Nigerian SMA priests with three more to be ordained this July, most of them working in different parts of Africa. More and more the SMA is taking on an African face with up to 236 seminarians in different SMA Formation House across Africa.

The changing face of the SMA was evidenced in a dinner organized by the Irish Embassy for departing Irish SMA missionaries in Lagos, just two days after the ordinations in Ibadan. The dinner took place in the home of the Irish Consul, Mr Connie Guilfoyle and was attended by the Irish ambassador, His Excellency Paddy Fay and the SMA Regional Superior for Nigeria, Fr Maurice Henry.

Our picture shows the four departing missionaries who are leaving the Archdiocese of Lagos. From left Fr Noel O’Leary, Ambassador Fay, Consul Guilfoyle, Frs Eamonn Finnegan, Val Hynes and Andy O’Sullivan. Between them they have served Africa for over 150 years in total. The Ambassador spoke in glowing terms of the contribution of the Irish missionaries. They give a very positive image of Ireland and also give the Embassy staff easier access to important Nigerian personalities, many of whom attended schools staffed by Irish SMA missionaries. The Consul spoke of the great possibilities for Irish investment in Nigeria, the fastest growing economy in Africa. Soon Nigeria will outstrip South Africa as the economic engine of Africa just as Africa is surpassing Europe as the missionary engine of the SMA.

Reading Michael McCabe in a go-slow in Lagos, as I returned from the Embassy dinner, I was struck in the light of my weekend experience in Ibadan and Lagos how apt was what he wrote in the Special Bulletin, Preparing for the Provincial Assembly 2013, “Today, 80% of our vocations come from Africa. In a decade or two the western (white) dimension of SMA will disappear as we will not have members from the traditional provinces working in Africa. The working force (excluding retired) of the SMA will be entirely in the hands of the new units of the Society. The vast majority of these will be from the 14 countries of Africa from which we are now receiving nearly all our vocations. We will be not just a Society of Missionaries to Africa but will in truth be the Society of Missionaries of Africa (although with a significant number of Indian members)” and I add for SMA Europe, a Society of missionaries after Africa.