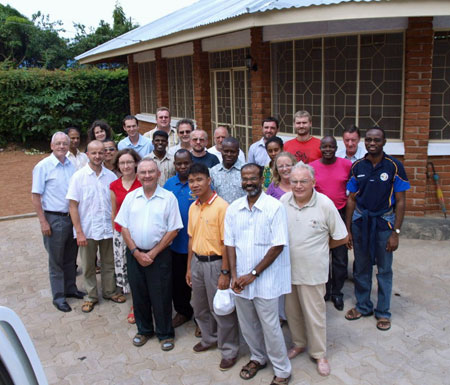 5 SMA Lay Associates complete the SMA Team in Tanzania
— 2 each from the Netherlands and Poland and 1 from the USA.

SMA Administration
Fr Janusz Machota (a member of the Polish District-in-formation) is the fulltime Regional Superior and assists in the surrounding parishes in Mwanza. He is the third Regional Superior of the SMA team in Tanzania since its foundation.

The Guestmaster at the SMA Regional House is Fr Robert Wolff (Strasbourg) who also helps in neighbouring parishes.

At present the SMA has four Tanzanian priests: Fr Ephrem Kway (on mission in Nigeria), Fr James Shimbala (on the staff of the SMA International Formation Centre, Calavi, Benin Republic), Fr Joseph Marwa, responsible for the Great Lakes DF Preparatory Programme in Kawbe, Zambia and Fr Edwin Mmasi, ordained in 2010, who is on mission in Kenya.

There are presently eight other Tanzanian SMA seminarians. Please keep all of them in your prayers.