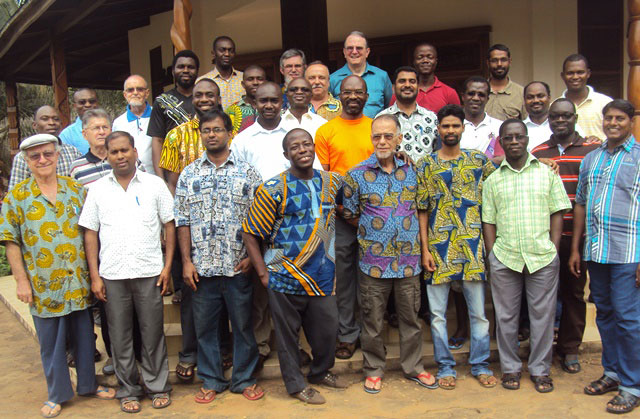 Our group photograph shows how the ‘face’ of the SMA has changed dramatically in the last 20 years.
No longer drawing only on Europeans and Americans we now have priests from Africa, Americas, Asia and Europe.
To God be the glory!

There are 37 SMA priests on mission in the Region. The 26 in Benin work in ten parishes as well as running Pastoral Centres (for Street Children, Diocesan Formation Centres). Four SMA priests staff the SMA International Spiritual Year Centre at Calavi, where the Assembly was held. There are also 6 Lay missionaries in the Region, from France and Benin Republic.

The 11 SMA missionaries in Niger (including the Archbishop of Niamey) work in six parishes and the SMA House in Niamey, involved in both urban and rural apostolates. The Assembly was officially opened by Fr Bruno Miyigbena, the SMA Regional Superior. Fr Bruno, a member of the Bight of Benin District-in-formation (BBDF) is the first Beninois SMA priest to lead the Region, having succeeded Fr Michel L’Hostis (Lyons Province) in 2013.

The celebration of the Eucharist was at the heart of each day during the Assembly – our picture shows Frs Raja Lourdusamy, Renzo Mandirola, Bruno Miyigbena.

In his opening address to the Assembly Fr Bruno reminded the participants that their meeting, first of all, was an opportunity to engage in a fraternal sharing. The work side of the meeting is to address recommendations which have come from the SMA General and BBDF Assemblies which took place last year. The task for this meeting was to see how to apply those recommendations in the Benin-Niger Region. For this reason the Regional Council chose ‘New perspectives for the SMA mission today in the Benin-Niger Region’ as the theme for the Assembly.

Underlying this work will be

The Assembly began with a Retreat preached by Fr Renzo Mandirola SMA who was also the Facilitator for the Assembly. Also attending was the Vice Superior of the BBDF, Fr Francois de Paule Houngue.

Without neglecting the many commitments we are engaged in it was agreed that priority be given to the following:

mission in rural areas – the intercultural parish Bo-Bariba-Fulfulde (N’Dali diocese) and the mission to the Gourmanche people (Archdiocese of Niamey, Niger).

In his Closing remarks at the end of the Assembly Fr Bruno thanked the following:

Seven units of the Society are working in Benin-Niger: Bight of Benin, Great Lakes, Gulf of Guinea, India, Italy, Lyons [France] and Spain.