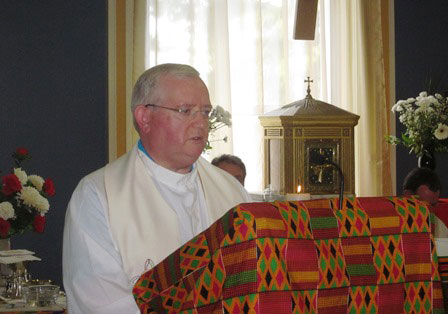 Fr Malachy Flanagan SMA (pictured below) preached at the Mass to celebrate the Silver Jubilees of Ordination of Fathers Chris Brennan, Damian Bresnahan, Tommy Faherty and Alberto Olivoni. Three of the Jubilarians live in Blackrock Road and the fourth, Fr Alberto Olivoni, was home from his mission in Nigeria. It was an opportunity for the community to celebrate with them. The official Provincial celebration for the entire class will take place in Dromantine in June. The following is the text of Fr Malachy’s homily on the occasion. 25 years ago brings us back to 1988. A special year in the life of our jubilarians – the year of their ordination. Let us jog our memories to a few events that took place that year – to put things in context. It was the year Ireland beat England 1-0 in the European Cup. It was the year Dublin celebrated its official 1,000 birthday and in that same year, Nelson Mandela was awarded the freedom of the city of Dublin.

I would like to pull together a number of themes that are important to bear in mind as we gather to mark the silver jubilees of our (four) brothers. The themes are interwoven through that of Calling, Service, Witness and Gratitude.

Just like the young Samuel in the first reading, our Jubilarians answered their own divine call many years ago. And I’m sure that each one of them would explain it as coming in a unique and very personal way.

“Speak Lord, your servant is listening” is something each one of these men felt in their heart as they responded to that calling. And the call didn’t end there but continues right up to today. It’s a daily call from the Lord to serve him.

Just as the divine call is very personal and unique so too are the gifts that each one of these men brought to his vocation. Just as there are many gifts in the body of Christ, as St Paul speaks of in his letter to the Colossians, so too are found many gifts in our jubilarians:  all are pastors and missionaries, but one was involved in medicine, one in formation and also proficient in Irish Dancing, one in diocesan administration and one in secretarial and promotion work. Each one brought his own different gifts and talents and applied them to his ministry.

There’s a story told of a monk who had prayed all his life that he might be blessed by seeing a vision. At last, one day, his prayers were answered. Just as he was beginning to absorb the full impact of the vision, the monastery bell rang. It was the bell which notified that there were beggars at the monastery gate waiting to be fed. On this day, it was the monk’s turn to attend to the beggars. For a second, he hesitated, (Will I or Will I not go?) and despite the attractiveness of the vision, he turned his back on it, and went to feed the beggars.

There were more beggars than usual and it was well over an hour before he returned to his place of prayer. To his surprise and delight, the vision was still there. Then Jesus in the vision spoke to him and said: “had you not gone to feed the beggars, I would not have stayed”.

Jesus can come at the most awkward of moments. Service is about putting oneself out. Putting the other first. It would have been so easy for the monk to remain at his place of prayer and forget about the beggars. Our 4 jubilarians have given 100 years of missionary service. In each of their missionary journeys the call to service was uppermost and we commend them for their service.

A quick look at Damian’s missionary journey, we’ll see he spent many years in Ibadan, Nigeria in parish ministry and I remember visiting him in the parishes of Moorplantation and Oke-Bola. He spent some time then in the formation house, Bodija and finishing up his time in Nigeria as the vice regional superior in Nigeria South. Back in Ireland he was the Superior of Blackrock Road House and then for the past 6 years as Provincial Councillor.

For Alberto, we know he spent many years in Ondo, Nigeria as a medical doctor before ordination. And after ordination, he returned to Nigeria as doctor and priest and preformed both roles throughout his entire ministry – From Ondo to Ilorin Diocese working in Bacita Hospital and generously helping out in the parish at weekends alongside Paddy McGovern who was in charge of the parish. And then to Kontagora and his work at Kwimo and from there on to Bauchi. I worked alongside him in Ilorin and Kontagora and was very happy to benefit from his medical expertise when sickness came calling.

Three people were discussing some recent translations of the Bible. One said: “I like the New American Version. It is so much clearer than the older version and is much easier to read”. The second said: “I like the Jerusalem Bible. It’s not only clearer, but its more poetic which makes it more suitable for us in prayer”.

The third said: “I like my mother’s translation best of all. She translated the Bible into actions – which makes it so much easier to apply to daily life”.

As Christians, it is what we are that is our message, rather than anything we may say. Witnessing is central to being a Christian.

As witnesses to Jesus, we have a responsibility to make him present among our people. We have often heard it said and we have first hand experience that while on mission, we receive more than what we give. The poor which we work with actually evangelise us.

Alan Paton in his book: “Cry the Beloved Country” says: “Do not look for me just in the sanctuaries, or in the precise words of theologians, or in the calm of the countryside: Look for me in the place where people are struggling for their very survival as human beings“.

Our photo shows Frs Damian, Alberto and Tommy cutting the Jubilee cake at the lunch after Mass.

For ourselves, this means, that when we are ready, when we are willing, when we appreciate the great privilege of ministering to Jesus in his poor, then we will find him in the poor. In our recent General Assembly, we re-affirmed that as SMA missionaries, a vital part of our mission is to the poor and most abandoned.

The Gospel today reminds us of detachment – freeing ourselves from the things of this world in order to be free for the Lord. It speaks too that With the Lord, all things are possible. I am sure that our jubilarians can think of many things and events that happened over the past 25 years – that if it were not for the Lord’s help – they would not have been possible.

A quick look at Tommy – and we see that he spent a number of years after ordination in the pastoral ministry in Ndola in Zambia. Then he was recalled and spent some years as the Anglophone secretary in the Generalate in Rome. Then back home in Ireland he spent a number of years on promotion work with the Mission Boxes in Northern Ireland. Then some years on promotion work with FVC in Munster and now presently working in the Archives. In all the different works that Tommy was involved in – he was able to apply his secretarial skills in recording with great detail very important information related to that particular work.

And then Chris (in abstentia)  – practically all of his time since ordination was spent in Liberia, in Gbarnga Diocese. First in the pastoral ministry, then during the civil war in that country. He worked with the Liberian Refugees along the Ivorian  – Guinea borders. Then with the transfer of the Bishop of Gbarnga Diocese to Monrovia – Chris was appointed as Apostolic Administrator of that Diocese. A position he held for a number of years until last year when a local Bishop was appointed. Just recently he was appointed as a member of Staff in this house and already his handiwork is evident.

From all the jubilarians – we can see the richness and variety of their ministries. Ministries of Service and Witness together which makes a very substantial contribution to SMA Mission over the past 25 years.

– A Jubilee always calls for a celebration. Celebrating the fact of having reached a certain milestone on the journey. (which is what we’re doing today)

– A Jubilee calls us to look back over what has been, all that has happened – be it good times and for those not so good times and which often brought pain or misunderstanding or hurts.

– A Jubilee calls us to learn from the past and move on.

– A Jubilee calls us to look to the future with a renewed vision.

So as I’ve just said that while we look over the past, Jubilees also face us towards the future and this is an opportunity to re-focus ourselves, re-commit ourselves to the task ahead. God will never abandon us – He is with us every step of the way. He who calls us will never leave us. Like Mary in the Magnificat, we must renew our “Yes” to God. Place the future, the unknown into His hands trusting that He will lead and guide us all the way.

The African People have taught us many things about the importance of celebrating life, being grateful and thankful for life’s blessings.

As we remember and reflect with Damian, Chris, Tommy and Alberto on the past 25 years of priesthood – it is really something to thank God for.

To God be the all the glory and gratitude for what He has done through these 4 men – our brothers and confreres.  May the Lord continue to bless you and be with you and supply you with all the power and graces you need as you face into the next 25 years of ministry.