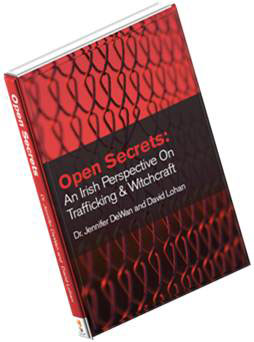 a new book from Cois Tine

Cois Tine is about to launch a ground-breaking Book on human trafficking and witchcraft. The publication called Open Secrets: An Irish Perspective on Trafficking and Witchcraft co-written by Dr Jennifer DeWan and David Lohan makes it clear that the unlikely pairing of these two very different topics is not as strange as it would seem. They are in fact intimately linked in the sordid, violent and disempowering process that lies at the heart of human trafficking.

Open Secrets is a practical response to the human trafficking and witchcraft encountered during Cois Tine’s pastoral work with immigrants over the past ten years. Fr Angelo Lafferty SMA, Director of Cois Tine says. “The suffering and pain caused by human trafficking and witchcraft are enormous. Because of the fear and secrecy surrounding them they were rarely spoken about openly. We also found that, in general, people did not understand or even accept the reality of trafficking and witchcraft in Ireland. Consequently appropriate responses are not being made to victims. To raise awareness and understanding we decided to do something about it and Open Secrets is the result.” Author Dr. DeWan states: “It was very important to all of us involved in Open Secrets that the focus be on developing ways to provide non-judgmental and culturally-aware support for victims, whether they are dealing with witchcraft in their lives or are trying to come to terms with the violent and traumatic experience of being trafficked.”

Open Secrets provides a clear description of human trafficking, its causes, processes, effects, and of the violence and greed that lie at its heart. Witchcraft is examined from the perspective of its history and its different manifestations in Europe and Africa. During the colonial era and into modern times, these manifestations have intermingled and influenced each other and now, in modern Ireland, they meet again in the violence of human trafficking.

Summing up author David Lohan says, “The essence of the trafficking process is one in which the victim at every stage is losing power, while the trafficker increasingly obtains more control over the victim.”

Human trafficking and witchcraft are enslaving people in Ireland today – this is a shocking fact. Such slavery exists in the sex trade, in domestic and other forms of servitude. Equally shocking and equally factual is the reality that this is so because there is a demand. Irish people are willing to use, abuse and exploit their fellow human beings for economic benefit or their own gratification.

Open Secrets is a must read for all who seek to gain an understanding of these issues.

Hard copies of the book will be available for purchase directly from Cois Tine (www.coistine.ie), and in all leading bookstores including Easons, Waterstones, Veritas and Kenny’s of Galway who will post copies ordered through its website to any address in the world postage free.

Harcopies and / or E-book versions are available form Amazon.com, Barnes and Noble and Kindle.