Home Africa One of the best-kept secrets 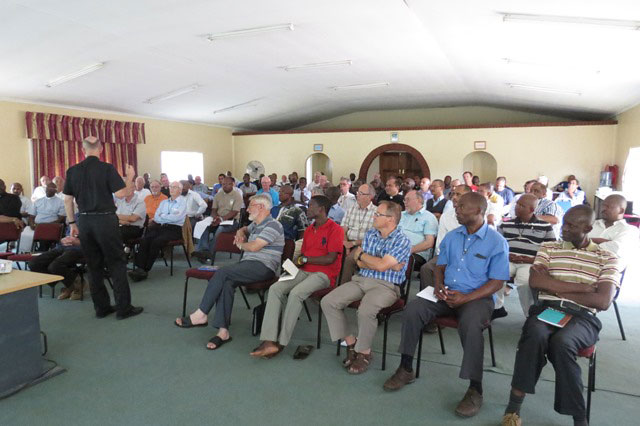 There persists within popular culture a belief that Catholic priests live lonely and unhappy lives. Furthermore, the commitment of a celibate lifestyle by clergy is often assumed to stunt psychological health and promote psychosexual deviancy. The findings of recent research undertaken by Msgr. Stephen Rossetti with representative samples of Catholic clergy in the USA challenge many of these assumptions and suggest that the majority of these priests experience high levels of satisfaction in their personal lives and public ministry. Similar work satisfaction studies across a broad sampling of occupations repeatedly report clergy as being the most satisfied of any career (NORC, 2007; Forbes, 2011). Intuitively, these findings make sense as ministry affords clergy the opportunity to live out their deepest convictions within a community of believers who shares their values of compassion, service and social justice.

While priests are as vulnerable as any other occupation to work stress and personnel challenges, these research findings would seem to suggest that the majority of priests enjoy being priests and believe they are making a difference in the world.

The Southern African Catholic Bishops Conference (SACBC) Ongoing Formation Committee, in collaboration with the Society of African Missions (SMA Fathers) and the Archdioceses of Cape Town and Johannesburg recently welcomed Msgr. Rossetti to South Africa for a series of symposia and workshops. Rossetti is considered one of the leading international authorities on the psychospiritual health of Catholic clergy and has authored several books and numerous articles on topics related to priestly wellness. He is the President of Saint Luke Institute (USA) and teaches on the faculty of the Catholic University of America and the Gregorian University in Rome.

In a series of workshops to bishops, clergy and religious, Rossetti spoke about his research and what predicts happiness among Catholic priests. Key factors included a personal relationship with God, commitment to daily prayer, living a The importance of healthy, appropriate and supportive interpersonal relationships was repeatedly emphasized by Rossetti as a key source of meaning in the lives of priests and seminarians. Rossetti found in his research that the strongest predictor of a positive relationship with God was having close friends. This finding makes sense when we recall in the scriptures how Jesus himself spoke of love of God and love of neighbor as being two sides of the same coin. The priest is continually called in the practice of ministry to be a man of communion and a relational bridge between God and humanity. Healthy connections in the lives of priests with family, friends, clergy peers and parishioners serve to strengthen their relationship with God. The practice of daily prayer was found to be a powerful protective factor against depression, emotional exhaustion and loneliness in the lives of clergy.

Priests are called to live lives of positive integrity and authenticity. At its core, priesthood involves the living of a radical and total commitment. There is no question that priests experience many challenges in the daily living out of this commitment within a secular culture which provides little validation. However, they also experience many consolations. Rossetti encouraged priests to open their hearts to the power of God’s grace working through them and to welcome the support of family, friends, clergy peers and religious leaders. The need for rest and renewal is understood to nurture deeper levels of satisfaction in the lives of priests. The SACBC Ongoing Formation Committee is tasked to promote a culture of wellness among clergy and religious and facilitates annual sabbatical programs and educational workshops across the region. Many priests who attended the clergy day symposia in Cape Town and Johannesburg reported feeling affirmed in their vocational calling and challenged to live their priestly lives with joy and gratitude.

The Society of African Missions were thanked for facilitating the visit of Msgr. Rossetti to South Africa and for their sustained commitment in supporting the ongoing formation of clergy in Africa. The witness of joy and gratitude in the daily lives of priests becomes an effective instrument of evangelization and inspires us all to become better people.