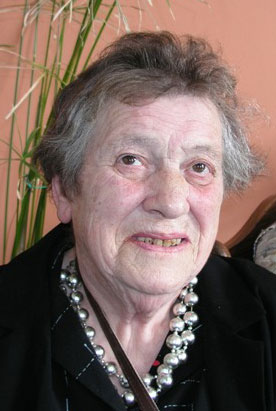 The Provincial Leader, Fr Fachtna O’Driscoll SMA, and the members of the Society of African Missions regret to announce the death of Mary (Sadie) McDonagh.

Born on 17 September 1924, Sadie was a valued staff member at the African Missions until her retirement. During her years with the SMA, Sadie worked at various household duties in the community. Among her responsibilities was caring for the Sacristy at St Joseph’s SMA parish Church where she endeared herself to the parishioners.

In 2004 Sadie was made an Honorary member of the Society in recognition of her devoted service to the African Missions. The SMA Superior General, Fr Kieran O’Reilly, travelled specially from Rome to confer the Membership on Sadie and on another Honorary member, Margaret McMahon.

During her latter years, Sr Rosalie Bowles OLA was a daily visitor to her home to make sure all was well and Sadie greatly appreciated her kindnesses. Deirdre Buckley was another good friend who dropped in to see that all was well. Weather permitting, Sadie took her daily walk, accompanied by her devoted dog Cindy, and call into the Reception at the SMA House for a chat and meet any parishioners who might be there. She also made time to visit St Theresa’s Nursing Unit, to ask after its residents and to greet the Nursing staff who cared for her during the few times she needed medical attention.

Monday, 30 January, 5.30pm
Her remains were received at the SMA Community Oratory in Blackrock Road and Evening Prayer for the Dead was recited by the community.

At 7.30pm, her son Leonard, his wife Clara were joined by the SMA community, OLA Sisters, parishioners and friends of Sadie for the Rosary, led by Fr Damian Bresnahan SMA. In his remarks, Fr Damian reminded us of how much time and devotion Sadie gave to her duties in the Church, arranging flowers, keeping the altar neat and tidy, preparing for Masses etc. Those who led the different decades of the Rosary reflected different aspects of Sadie’s life.

Her son Leonard and daughter-in-law, Clara, led us in the first Joyful mystery, the Annunciation. Sr Rosalie Bowles OLA and Deirdre Buckley led us in the second mystery, the Visitation. Both of them were regular and faithful visitors to Sadie and Margaret at their home. Sadie had gone shopping with Sr Rosalie just two days before her death. Sr de Pazzi OLA, who knew and worked with Sadie for the longest period, led the third mystery, the Nativity. Mary O’Leary, with Sadie, cared for the flower arrangements in the Church. Mary led the fourth mystery, the Presentation of the Child Jesus in the Temple. Today, a lot of the work which Sadie did in the Church is done by Margaret O’Regan. Margaret, along with a former staff member, Paddy Daly, led the fifth mystery, the Finding of the Child Jesus in the Temple.

Tuesday, 31 January, 7pm
Following prayers in the SMA community Chapel, in the presence of her family, friends and parishioners, Sadie’s remains were taken to the St Joseph’s SMA Parish Church where Fr A J Butler SMA led us in prayer. Fr Tony read from St Paul’s Letter to the Corinthians (12:11-16) and the Parish Priest, Fr Tommie Wade SMA, read a passage from St John’s Gospel (16:29-33). Fr Tony reminded us that Sadie was always able and willing to listen. She also allowed people, in her latter years, to care for her. And this is a gift of Sadie to us. On a lighter note he told us that Sadie kept a ‘hawkeye’ on what was happening in the Church before Mass and, if needed, she could ‘put you in your place’. As a woman who was very much ‘at home’ in this Church it was right and fitting that she should spend some time here before her burial tomorrow.

Fr A J Butler was the MC and the singing was led by Fr Denis Collins.

Her son Leonard, his wife Clara and their two daughters, Paula and Lisa, and their grandson Darren along with other family and friends gathered with the SMA community for the funeral Mass. A large number of OLA Sisters, many who knew Sadie well and had worked with her in past years, gathered to say a final farewell. So too, many parishioners who knew Sadie for many years, especially during her time as Sacristan, attended.