The SMA involvement in Kenya began in 1992 when the British Province undertook the administration of the Parish of St Joseph the Worker, in the city and Archdiocese of Nairobi, at the request of the then Cardinal Michael Otunga (RIP). Fr Patrick Connolly SMA (British Province) was the first Parish Priest assisted by Fr Michael B McPartland SMA. Subsequent Parish priests were Fr John Hannon SMA (Clare) and Fr Frank Wright SMA (American Province).

In 1995 the Region of Kenya-Tanzania was established. Its headquarters was in Mwanza, Tanzania.

In 2001 it was decided to divide the Kenya / Tanzania Region into two separate Regions. A suitable house was acquired in Nairobi and it became the Headquarters for the Kenya Region. It serves as a place for missionaries passing through Nairobi from other parts of the country.

In 2009 the SMA African Foundation was divided into three separate units as Districts-in-formation (DF): Bight of Benin DF – with it headquarters in Ibadan, Nigeria; Gulf of Guinea DF – with its headquarters in Lomé, Togo and the Great Lakes DF, which has its headquarters in Nairobi. Members of this DF come from the DR Congo, Kenya, Tanzania and Zambia The present Superior is Fr Jean-Baptiste Musa-Bino (DR Congo) assisted by Fr James Shimbala (Tanzania). 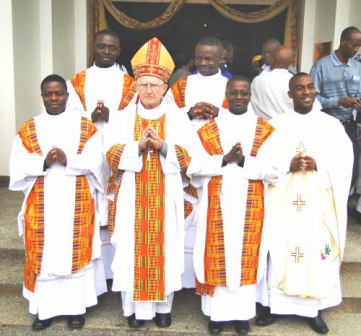 In 1993 the then SMA Superior General, Fr Patrick J Harrington, launched a project to seek vocations in Kenya and to establish an International House of Studies in Nairobi. Fr Thomas Hayden SMA (US Province) was appointed to lead the project and Fr Denis O’Sullivan (Cork) was put in charge of vocations.

In 1994 the first phase of construction of the House of Studies was completed. Students from Kenya and Tanzania commenced studies in Philosophy while students from India and Poland began Theology.

Our picture above are the four Deacons from the 2011 class with Bishop Noel O’Regan SMA.

Seventeen students are studying Philosophy; Twenty seven are in the Theology cycle.

There are twenty-one SMA missionaries appointed to Kenya. Some are in pastoral or administrative appointments in one of the four dioceses where the SMA are: Nairobi, Lodwar, Ngong and Kitale. Others are working directly for the Society (House of Studies, Regional or DF administration). The main focus of our missionary work is both urban and Primary Evangelization as well as providing some specialist ministries.

They come from the following units of the society: Ireland [5], Kenya [4], Ghana [3], India [3], Tanzania [2] and 1 each from DR Congo, Ivory Coast, Netherlands and Zambia. There are 15 SMA priests from Kenya, working in different parts of Africa and beyond. We also have three temporary members in formation.

There are 4 Archdioceses, 20 dioceses and 1 Vicariate Apostolic in Kenya.

Also living in the Archdiocese of Nairobi are four SMA priests on the staff of the SMA House of Studies and three SMA priests administering the Great Lakes DF.

Diocese of ‘Ngong – SMAs care for Mary the Mother of God parish, Embulbul.

Diocese of Lodwar Bishop Patrick J Harrington SMA (Castletownbere, Cork) led the diocese since 2000. In March 2011 Rt Rev Dominic Kimengich was installed as the third bishop of the diocese. Fr Ludwig vanBussel (Dutch Province) ministers in the parish of Lorugumu.

Diocese of Kakamega: Fathers Pascal Ekisa [Kenya] and Amal Raj Lawrence [India] are ministering in a parish in this diocese.

Regional Superior – Fr Fabian Hevi SMA (Ghana, Gulf of Guinea DF), re-appointed for a third three-year term in 2013. He can be contacted at kenyasma @ gmail.com