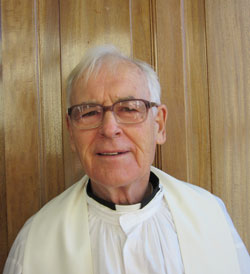 Father John O’Hea SMA celebrated his Golden Jubilee as a priest on 21 December 2010. A native of Woodfield, Clonakilty he was born in 1932. Following his brother James he entered the SMA and was ordained a priest in 1960. He was appointed to the then diocese of Ibadan. Thirty four years later he shared the joy of the people of Ibadan when it was raised to the status of an Archdiocese with the Most Rev Felix Alaba Adeosin Job as the first Metropolitan Archbishop.

The ‘cradle’ of the Church in Ibadan  still stands in the grounds of the Sacred Heart Minor seminary on Oke Are hill, overlooking the sprawling city of Ibadan. The first Mass was celebrated on Oke Are hill in 1884. The seed sown by those first missionaries, Fathers Theodore Holley and Jean-Baptiste Chausse, continues to bear great fruit. Today there are more than 100 Ibadan diocesan priests, 80+ Religious Sisters as well as 40 or so missionary priests and Sisters. The Catholic population of the diocese is about 10% and the Church continues to grow there. Thirty five parishes spread throughout the Archdiocese (urban and rural) ensure the Church is represented all over Oyo State.

One of the most effective means of evangelization is proper Catechesis. And this is the area for which Fr John O’Hea is known far and wide. He has devoted all his missionary life to teaching catechism, first to children but later to the teachers of catechism. He has written and published several books to help ‘pass on the faith’. And today he continues, every Sunday, to visit a different parish or outstation Church to pass on his knowledge and help the teachers in their ministry.

On 19 January 2011 the priests and faithful of the Archdiocese of Ibadan gathered on that very same Oke Are hill to celebrate the 50th Anniversary of Fr John as well as two Dominican Friars, Fathers Justus Porkzewinski and Edward Riley. The sermon was preached by Fr Anthony Akinwale OP. In it he paid tribute to the total availability of Fr O’Hea, particularly through his Catechetical work.

The priesthood of Christ

“It is not ourselves that we are proclaiming, but Christ Jesus as the Lord, and ourselves as your servants for Jesus’ sake.”

With these words of the Apostle Paul, I greet you, Your Grace, Archbishop Felix Job, you who, as Bishop, bear the likeness of Christ, our Supreme High Priest, and perform his office in the Church of God in Ibadan with care and solicitude for the whole Church.

I would like to single out for special greetings our three golden jubilarians, Fr John O’Hea, illustrious member of the Society of African Missions, Frs Justus Porkzewinski and Edward Riley, worthy sons of the Order of Preachers.  Fifty years ago, on the day of your priestly ordination, the Lord Jesus, our Eternal High Priest, addressed to you the same words he spoke to the disciples in the Gospel read to us some minutes ago: “I shall no longer call you servants, because a servant does not know his master’s business; I call you friends, because I have made known to you everything I have learnt from my Father” (Jn 15:15)…

… I greet Christ’s lay faithful here present, you who answer the universal call to holiness by “engaging in each and every business of the earth and in the ordinary circumstances of social and family life”, you who have the special vocation to “make the Church present and fruitful in those places and circumstances where it is only through [you] that the Church can become the salt of the earth”.

May God whose Spirit has gifted each of us grant us the courage, wisdom and strength to be a holy and priestly people.

We gather here this morning to offer the holy sacrifice of the Mass in thanksgiving to God for the priesthood of Christ.  In the words of the First Eucharistic Prayer (the Roman Canon), we offer to God “this sacrifice of praise for ourselves and those who are dear to us”, and we pray to him who is “our living and true God, for our well-being and redemption”.

Your Grace, dear brothers and sisters, those who know our three jubilarians can testify to the good quality of priestly life and ministry with which each of them has gifted the people of God.  But we are not here to celebrate their heroic achievements.  Rather, we are here to thank the Lord who, in his generous love, chose them as his friends and uses them as instruments of his redeeming love.  What is most fitting on a day like this, therefore, is not a panegyric, but humble words of thanksgiving.

Yes, we must constantly keep in mind this simple and beautiful duty that whenever we Christians celebrate the priesthood it is the priesthood of Christ that we celebrate.  To fail to keep this in mind is to end up celebrating our ego, thumping our chests for what we have not accomplished by our unaided selves, instead of praising the Almighty for what he has accomplished in us.  To celebrate our ego is to celebrate our emptiness and vanity.  For the priesthood is not what we have achieved.  It is what Christ has achieved in us despite our unworthiness.  Who are we but empty and fragile vessels?  Did not Paul the apostle say this to us in the Second Reading?

When Christ calls a man, a mere mortal, to himself, choosing him to be a priest, this is the power he confers on him, and this same power was conferred on our three golden jubilarians fifty years ago.  It is the power to make all peoples his disciples.  It is the power to sanctify and to govern.  This power is treasure.  But it is conferred on mere mortals that we priests are—mere mortals, fragile, fallible and sinful.  Even as priests, we bear within ourselves our human nature wounded by sin, a human nature prone to sin.  Our fragility is what Paul refers to in the Second Reading of this Mass in the analogy of the treasure in clay.  The power given to the priest is treasure.  But the priest who bears this enormous power is nothing but perishable clay.  He can be broken.  In fact, he can be shattered to pieces.

The priest may forget who he is.  But he ought not.  He may get intoxicated by what he has accomplished, forgetting that, whatever it is, it is what the Lord has accomplished in him.  But again, he ought not.  The priest is never to forget that his vocation is an act of mercy and he will always depend on God’s mercy for his own sins even as he ministers God’s mercy for the sins of others.  So there is no place for arrogance and vanity in the priesthood.  There is no room for the uppity and the noisy.  But there is room for the sober, for those who, in their sobriety, constantly echo the words of the Second Eucharistic Prayer: “We thank you Lord, for counting us worthy to stand in your presence and serve you.”   What gives us joy today is that Christ in his priesthood offered himself to God so that we might be saved.  And he has counted each us priests worthy, he has counted our three jubilarians worthy to stand serve him.

As we thank the Lord for the priesthood of Christ, as we thank him for counting Frs O’Hea, Justus and Riley worthy to share in this priesthood, we thank him for using each of them mightily in the Church in Ibadan.  The priestly life and ministry of these three men is worth celebrating because the Lord has used them to teach us that the priesthood of Christ is a life of total availability for the work of God.  From distant lands, they came in their prime, as missionaries.  And now, their efforts as missionaries have borne fruit.  Thanks to the Lord of the harvest, the Church in Nigeria, a Church that once received missionaries, now to distant lands sends her sons and daughters as missionaries.  Fr O’Hea is from Ireland.  Today, that country hosts Nigerian missionaries.  Frs Justus and Riley are from the United States, another country that hosts Nigerian missionaries.  In this way, divine providence confirms a wise saying of our elders: “Bi okete ba dagba tan, omu omo re lo n mu.”  (The giant rat, in its old age, sucks the breasts of its child).

When I came to Ibadan in 1980 to begin my novitiate, Fr O’Hea was Parish Priest here in this Diocese.  Today, he is still very much engaged in catechesis, a sign of his total availability…

… In the very first paragraph of Lumen Gentium, the Council made what is perhaps the key statement of the entire Council by describing the Church as “in the nature of sacrament—a sign and instrument, that is, of communion with God and of unity among peoples.”  If the Church is sign and instrument of communion with God and of unity among peoples it is because of the priesthood of Christ, the priesthood in which and through which he sacrificed himself as our Passover.  The death of Christ our High Priest united the children of God scattered by sin and alienated from God.  He himself had said: “when I am lifted up, I will draw all peoples to myself”.  The priesthood of Christ has brought us together in the Church, a Church that is a priestly people.  We are priests because Christ Jesus, who wishes that we share in his priesthood, also wishes that we use our priestly life and ministry to gather the children of God together in the Church.  Christ wishes that we use our life and ministry as priests to bring back God’s scattered children into communion with God and into unity with one another.  Today, in our world, and in our country where there are so many divisions, where people enter into malicious solidarity to work against the interests of others, the life and ministry of the priest cannot be said to be irrelevant.  We have been debating where the next President of this country should come from, from north or from south.  But when the Super Eagles are playing, and they desperately need a goal, and the goal is scored, no one asks about the tribe or zone of the scorer of the goal before we break into wild jubilations.  If you go the hospital, and you are told that there are two doctors, one who is from your zone, and another from another zone, and that the one from your zone is not as competent as the other one, which of them would you like to treat you?  And so, while some people are working for division and discrimination, let our life and ministry be used not to scatter but to gather.

And we are not just talking of the ministerial priests.  All of us, by virtue of our baptism, are initiated into a Church that is priestly in character, and are called to share in the priestly office of Christ.  We are a priestly people.  The laity too offer spiritual sacrifices to the Lord by the good works they do.  On this day, as we celebrate the priesthood of Christ with our three jubilarians, let us all resolve to consecrate the world to God by our holy actions in regulating the affairs of our country and the affairs of our world.

May the good Lord reward our three jubilarians for allowing themselves to be used as his instruments.  As they advance in age may they enjoy good health of mind and body.  May Christ the Good Shepherd continue to give them a shepherd’s strength.