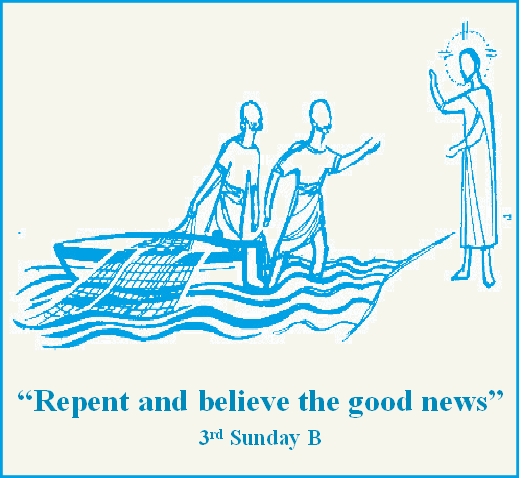 ‘Repent and believe the Good News’

The theme of repentance looms large in our readings today. The first reading, from the book of Jonah, illustrates how the people of Nineveh, much to the surprise and chagrin of Jonah, repent and are saved from destruction, when he is sent to warn them about their evil ways. In the Gospel we see Jesus beginning his proclamation of the Kingdom with the words: ‘Repent and believe the Good News’.  He adddressed these words not only to public sinners and those who knew themselves to be nó paragons of virtue, but to everyone listening to him.

It seems a bit strange to us to speak of repentance and good news in the same sentence. We tend to asssociate repentance with feelings of guilt and doing penances.  The good news  that Jesus announced was, of course, that the Kingdom or Reign  of God was ‘at hand’, that God’s vision of a world where Love, Peace and Joy was about replace a world where hatred, violence and sadness reigned. But before this could happen, people needed to recognise and  acknowlege that something was wrong or missing in their  lives and create the space within themselves for God’s future to be ushered in. Only transformed hearts can dwell in a world where God reigns. Repentance is about preparing our hearts for such a world. It is not about self-flagelation or wallowing in guilt about the past, but rather about longing for something better, and a willingness to take the first step ón a journey towards the future God wills for us. It is about conversion, opening our hearts to the action of God’s Spirit.

People may long for a better future but still find it hard to let go of the past and embrace a better tomorrow.  They fear the change will be too much of them. But repentance is not primarily our own work. It is, first and foremost, the fruit of God’s grace in us.  That is why we pray for it.  But there is something we can do to facilitate the process. And the first step we can take is to examine our basic attitudes to change, for these can be the biggest obstacles to repentance.  Some years I was speaking with a friend about the possibility of changing or turning around one’s life. He said to me :‘Trying to change is a waste of time.  Everything I tried has failed.  It’s just not possible to change.’  At the root of this attitude is a kind of despair, a loss of confidence in the possibility of change.   Fatalism eats away at our energy, and undermines our will to change.  It is not just opposed to hope; it is a sin again faith, which means trusting God and in what God can do for us and in us.

Another common attitude which blocks our embrace of change is complacency. The complacent person says ‘I’m all right the way I am.’  There was a lot of that attitude around at the time of Christ and there’s still a lot of it around today.  It is really a form of blindness. I fail see the plank in my own eye, though I can probably see very clearly the splinters in the eyes of my brothers and sisters. In the gospels we see that complacency was the attitude Jesus found most irritating.  For example, he berated the scribes and Pharisees who prided themselves on their observance of the law. He called them ‘blind guides’ because they thought they knew it all and had nothing more to learn.   The attitude of the complacent person is illustrate in the following Zen story:

‘A Zen master invited a visitor to tea.  The guest arrived, crossed his legs and sat in silence.  The Zen Master then took the teapot and started to fill the cup.  When he had filled it to the brim, he continued to pour until the tea was flowing over the saucer and on to the floor.  The guest was horrified and enquired why the Zen master was so careless.   ‘Because’, the master replied, I feel that your head is like this teacup – so full of certainty that it would be impossible for me to add anything to what you already know.  You cannot hear what I say.’

It’s very hard for God to find a niche in the armour of people as complacent and closed as the Zen Master’s guest.

A third obstacle which keeps people in a rut and prevents them from changing is fear. It is probably by far the most common attitude among those who have already made a commitment to Christ.  If we were to be converted mind, heart and soul to Jesus, where might that lead us?  The saints who tried to follow Jesus closely didn’t have it too easy. In the gospels, we see fear surfacing quite often among the disciples. And Jesus seems to understand their fears and go out of his way to reassure them.  Remember the incident of the disciples out on a boat in the Sea of Galilee and suddenly caught up in a storm. Jesus’ words of reassurance on that occasion ‘Do not be afraid. It is I’ were words he was to repeat over and over again. Fear, especially of what is new and unfamiliar, will   probably be a familiar companion in our journey through life.  However, our fears need not paralyse us if we acknowledge them and ask the Lord for the courage we need to continue the journey with him. Let us, then, take to heart Christ’s call to repent and open our hearts to the future God has in store for us, trusting his promise to be always with us, especially in our darkest moments.