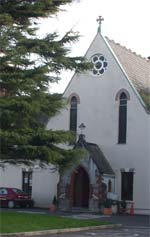 The first SMA establishment in Ireland (April 1877) was at Lough View on the Old Youghal Road, Cork. In October 1877 the SMA moved to a larger premises at Elm Grove, Mayfield, where a Secondary School for those who wanted to be missionary priests opened. The Church, which is intimate in scale and Victorian-Gothic in style, is cruciform in plan with a seating capacity of approximately 500. The walls are constructed in coursed square necked limestone blocks with clay bricked dressings around the doors and windows. The steep pitched slate-covered roof with ornate terra cotta ridge tiles is supported on exposed decorative trusses resting on the external walls and embossed corbelled pad stones. Gothic style porches give access to the building. The design and painting of the stained glass windows was carried out by Cormac Mehegan in 1950 and the fabrication and installation by Tom Henley took four months. The windows portray St Joseph, Our Lady and St Therese. The Church is Ireland’s National Shrine to St Therese of the Child Jesus, the Little Flower, Patroness of the Missions.