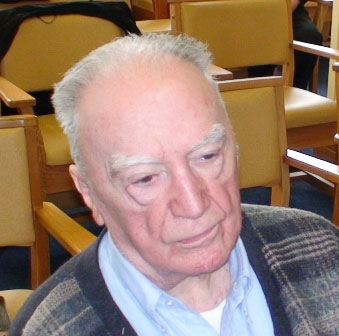 “Don’t speak unless you can improve on the silence” Those who lived in community with Sean might well believe that Sean took this motto as his life’s guide. There is a certain irony in the fact that the man whose gentle lilting Cork accent was the voice of English speaking Vatican Radio throughout Africa for many years was an extraordinarily quiet presence in social gatherings. It is said that the finest thing in the world is ‘knowing how to belong to oneself’. Sean was very at home in his own being and needed few words to express it. The last of a class of fifteen ordained in 1948 to go to the Lord, he has followed directly on his classmate, Fr Hugh McKeown.

We gather here in this church today to pray him home to the God he tried to serve faithfully in almost 90 years of living. And we do so with great confidence. Because our Christian faith assures us that at death life is changed, not ended. Our confidence is based not on an idle hope but on the very word of Jesus himself.

Our readings today speak eloquently of God’s nearness, of God’s desire to never let us be forsaken. Our opening reading from the Book of Ecclesiasticus tells us that the hope and trust we put in the Lord is not misplaced. “You who fear the Lord, wait for his mercy;… you who fear the Lord, trust him;…… you who fear the Lord, hope for good things.” Why? “Because those who have trusted in the Lord have never been disappointed. One quality that shone forth from every pore of Sean’s being was this trust in the Lord. Fear of the Lord, understood best as respect for all that is of God, was the cornerstone on which Sean built his life. He lived that faith in quiet perseverance and shared that faith as priest for sixty-three years. Sean was a prayerful man; Colum reminded us last evening that one regularly met Sean passing through the corridor holding solidly to his breviary. I cannot speak with any authority on his prayer life but my strong impression is that just like his living among human peers, in prayer too he listened more than he spoke. Most likely it was from this deep prayerful listening to the Lord that Sean developed a genuine contentment.

Sean was born in the heart of Cork city, in Mary Street in the South Parish, in February 1922. Two months would have seen him celebrate his 90th birthday. Third born in a family of seven – five of whom have predeceased him – he took his studies locally at Sullivan’s Quay and later in the North Monastery. He followed his father and sister into the Irish civil service for a short period before following through on a call to missionary priesthood. He joined the SMA and took the normal channel of seminary education to priesthood. Being a man of keen intellect, it was no surprise that he was assigned to pursue further studies in Cambridge University. Here he graduated with a B.A. and followed this up some years later with an M.A. In later years he was preparing a PhD dissertation in philosophy; unfortunately ill health intervened to make it impossible for him to pursue this to its conclusion. But Sean was not someone to get notions of himself or think himself above his peers. He did not fall into the temptation of exaggerating his real importance.

Thus from an early age the words of St Paul in his letter to the Romans – our second reading this afternoon – resonated with him. “Each of you must judge himself soberly by the standard of the faith God has given him”. As director of English language programming for Vatican Radio, with a special focus on Africa, one might have excused a certain sense of importance. No so for Sean.

Jesus says in the gospel passage of today: “It is not those who say to me, “Lord, Lord”, who will enter the kingdom of heaven, but the person who does the will of my Father in heaven”. For Sean MacCarthy doing the will of God was intimately bound up with doing the will of his superiors, i.e. true obedience best understood as deep listening. Sean was a loyal servant of the Church. He loved Rome and enjoyed sharing his knowledge of Rome with family and friends. But he would never share anything that might be termed insider gossip. He was a man of utter discretion. His taciturn nature stood him well in this regard. Sean was that sensible man of the gospel who built his house on rock. That solid foundation enabled him to withstand the gales of vulnerability that come to all of us at different stages of life.

In his early years Sean was a noted sportsman. He was particularly gifted in running the mile – he was the Dromantine champion on a number of occasions – and was a very accomplished boxer. I’m told that he could well have become national champion had not his seminary studies precluded any advancement in that area.

After his years in Cambridge Sean was assigned to Nigeria. He worked in the then Prefecture of Ondo-Ilorin. It was no surprise, given his training, that education was to be the focus of ministry. He worked in the Teacher Training College, Akure and then became the founding Principal of Annunciation School, Ikere Ekiti. I served in the diocese of Ekiti more than ten years after Sean has left the area and his name was still spoken of with deep respect. In fact, I enjoyed many games of tennis on the courts Sean had constructed at Annunciation school. Under his leadership the school became noted for the consistently high grades achieved by the students.

While there are many Nigerian men of standing who owe their present privileged positions to the quality of Sean’s teaching and administration, it is undoubtedly his years with Vatican Radio for which he will be best remembered. He was the head of English language programming there for sixteen years. He served under Pope Paul VI and Pope John Paul II, with whom he was to make many visits to Africa and other places. On one such visit Sean developed an illness which was to force him retire from radio work.

When Sean retired from Vatican Radio he was to spend another decade or so based in Rome where he had developed a number of close friendships. He particularly enjoyed playing games of scrabble. I presume these games were through the medium of English rather than Italian. It was an interest that was to endure. Many is the happy evening of retirement he spent here in Blackrock Road with one or another confrere at a game of scrabble. I’m told he wasn’t easily beaten. Another dimension to Sean’s life that might not have been very well known was his strong gra for the Irish language, even to the extent of sometimes writing poetry in Irish.

Further on in our second reading today St Paul tells us, “Do not let your love be a pretence, but sincerely prefer good to evil. Love each other as much as brothers should, and have a profound respect for each other. Billy shared with us last night what he termed one of Sean’s random acts of kindness. In Sean’s quiet and unassuming way he displayed a profound respect for others. Nursing and caring staff he treated with the essence of courtesy. He made few demands and was much admired and loved. His gentle and quiet presence will be missed within the community.