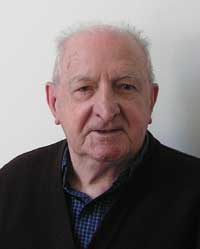 Fr James Noel (Jim) McCarthy SMA passed away peacefully at St Theresa’s Nursing Unit attached to the SMA House, Blackrock Road Cork, in the early morning of 13 October 2008.  He was recently diagnosed with cancer in the neck and throat.  His health deteriorated rapidly over the past few weeks until his death at 12.15 am.  He was 87 years old.

Jim was born in Haulbowline in Cork Harbour in the Diocese of Cork on 6 January, 1921, into the family of four daughters and three sons of the late Patrick and Margaret (nee Neville) McCarthy.  He received his priamry education in Cobh and his secondary education at Presentation Brothers College, Cobh (1934-38).  He decided to become a missionary priest and came to the Society of African Missions.  He studied at the SMA Houses in Cloughballymore, Co Galway – 1938-1940 and Dromantine, Co Down – 1940-1944. He became a permanent member of the SMA on 12 June 1943 and was ordained priest on 19 December 1943 at St Colman’s Cathedral, Newry, Co Down by the then Bishop of Down and Connor, Dr Daniel Mageean.

Following his ordination he studied at Cambridge and graduated in 1947 and graduated with BA.  He was awarded an MA in Anthropology in 1950.  In 1948 he was sent on missionary assignment to Nigeria and was appointed to the teaching staff of Ile-Ife Teacher Training College 1948-1950.  From 1950-1951 he was on the teaching staff of HETC, Abeokuta, Nigeria.  In 1952 he was on the teaching staff of Sacred Heart College, Ballinfad, Co Mayo. He returned to Nigeria in 1953 and from 1953 until 1958 he was Principal of St Leo’s Teacher Training College, Abeokuta before being appointed to the staff of St Gregory’s College, Lagos, Nigeria.  From 1967-1969 he was Principal of St Gregory’s College.  He was then appointed to pastoral work and from 1969-1972 he was at Falamo Parish Church, Lagos.  In 1973 he was elected as Provincial Councillor and following the death of the  Provincial Superior, Fr Laurence Carr, Jim was elected Vice-Provincial in 1976 and served in that capacity until 1978.

He returned again to Lagos in 1978 and was again assigned to Our Lady of the Assumption Parish, Falomo and was there until 1984 when he was transferred to the nearby parish of Lafiagi where he worked until 1990.  In 1990 he retired and lived at the SMA House, Blackrock Road, Cork and, for the past two years, at the adjoining St Theresa’s Nursing Unit, where he was until his passing.

After reposing in the SMA Oratory, Blackrock Road, Cork his remains were removed to St Joseph’s SMA Parish Church, Blackrock Road, on Tuesday, 14 October. The Funeral Mass was on Wednesday, 15 October at 11.00 am. Fr Fachtna O’Driscoll SMA, Provincial  Leader was the main celebrant and preached the homily. He was assisted at the alter by Fr Dan Murphy SMA and Fr Tom Curran SMA. Concelebrants included many SMA members and representatives of St Patricks Missionary Society. Fr Colum O’Shea SMA was the MC and Br Jim Redmond SMA was at the organ. The congregation included Sisters of Our Lady of Apostles, Mercy Sisters and Franciscan Missionary Sisters of St Joseph. The funeral mass was followed by interment at the SMA Community Cemetery, Wilton.

He is sadly mourned by his brother, Paddy, and his three sisters, Eileen McCarthy, Chris White and Ita Roche, by his niece Margaret O’Dwyer and nephew John White, other relatives and friends and his confreres in the Society of African Missions. He was predeceased by his sister Una who died tragically at an early age and his brother Fr Bartholemew McCarthy SMA who died on 17 June 2000.