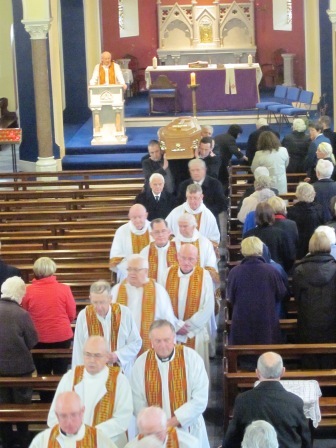 For someone born at Spring House on the Ballyhooley Road it is perhaps appropriate that we bury Fr Jim Conlon in Springtime. Appropriate, too, that a man who devoted a sizeable proportion of his time to the art of Spiritual Direction be buried on the Feastday of St Vincent Ferrer, an authority on the Spiritual Life.   Today we gather as a community of Christ’s disciples to pay our final respects to this good, decent, polite, earnest, solid and prayerful man, a missionary priest for almost sixty years. We pray him home to the God he tried to serve faithfully all his life. We do so in the sure and certain hope that having died and risen to new life with Christ in baptism Jim will now share with him eternal glory.

Our opening reading from the Book of Ecclesiasticus speaks of those who fear the Lord. Fear here should be understood as profound respect and belief rather than trepidation. Fear of the Lord means trusting in his mercy; it means hoping for good things such as everlasting happiness and mercy. Those with such a humble respect for the Lord will never be left forsaken. Jim Conlon had a very deep fear of the Lord, in this sense. And he spent his adult life trying to impart this deep awe and respect for God to all those he encountered. When the seriousness of his medical condition became apparent to him some time ago he resolved to accept the reality in front of him. He was not rushing to leave this life but neither was he interested in wrestling with God for a few more years on earth. He became serene and stoical and this acceptance of God’s Will – a practice of a whole lifetime – never left him.

One might say, of course, that he easily accepted God’s Will because he was a man of profound faith. Jimmy had long since made his own the beautiful words from our second reading this afternoon. “By raising Jesus Christ from the dead, we have a sure hope and the promise of an inheritance that can never be spoilt or soiled…. and through your faith, God’s power will guard you until the salvation which has been prepared is revealed t the end of time”. Jim believed this with utter conviction from his earliest days.

Jimmy was born into a family of three boys and three girls at St Luke’s, Cork city. He always remained close to his family. Even though he spent by far the major part of his life in Africa he never lost touch with his siblings or his nieces and nephews and later on his grandnieces and grandnephews were important to him. In fact, it is inspiring to see the level of affection in which he was held by his family. Your devotion to him, especially during his final days and weeks of illness, was good to behold. He attended Primary School at St Patrick’s, St Luke’s Cross. From there he went on to Christian Brother’s College. He had a lifelong interest in all sports, and at CBC he played and developed an interest in rugby, though hurling was always his first love. In fact, rugby involvement was to cause him some grief later, as during one holiday period he broke his nose playing rugby; this necessitated missing some weeks of class and eventually he was asked to repeat the full year.

Jimmy comes from a religious and missionary oriented family: he followed his brother Hugh into the SMA. Hugh was ordained nine years ahead of Jim and predeceased him by eleven years. His late sister, Mary, also devoted her life to mission, giving many years to Nigeria with the Sisters of Our Lady of Apostles.

Jimmy’s missionary career in Africa was largely focussed in two areas: formation of students for the priesthood and secretarial assistance to two bishops. His heart’s desire was to work more at the coalface of mission, but in a true spirit of obedience, which characterised his entire life, he devoted almost all his years to these tasks. Shortly after his appointment to Benin City diocese he was asked to become confessor to the students at the Minor seminary. Two years into his missionary life he was given a temporary assignment in the Major seminary. This temporary assignment was to last twelve years. This period also allowed Jimmy to exercise his considerable building skills. One year was entirely devoted to the supervision of building work on the student refectory and seminary library.

They say the best way to succeed in life is to act on the advice you give to others. Certainly Jimmy believed this maxim. As I said earlier, he was a man of deep faith who lived his life according to the values he tried to pass on to the students. In our gospel reading we hear Jesus instructing his disciples: “See that you are dressed for action and have your lamps lit. Be like men waiting for their master to return from the wedding feast, ready to open the door as soon as he comes and knocks. Happy those servants whom the master finds awake when he comes”. Jim spent his whole life dressed for action. And the master would certainly have found him spiritually awake when he called to bring him home early on Sunday morning.

As a little aside, I believe Jimmy must surely have a unique record in that he personally witnessed not just one plane crash but three. The first happened when he was a student at Clough: one evening while on a walk with some student colleagues he saw a small aircraft crash into a hill near Kinvara. Nobody was seriously injured on that occasion. The latter two both happened in Nigeria, both concerned stunt aircraft and unfortunately on each occasion the pilots lost their lives.

Jim’s career in Nigeria was interrupted by a one year stint as Superior of Cloughballymore and an eleven year spell in Sunyani diocese in Ghana. Here he gave remarkably efficient service as secretary to Bishop Owusu; he had cut his teeth earlier in this area of ministry during a short period as secretary to Bishop Kelly in Benin diocese, Nigeria. He was not only an office man however, as he exercised his pastoral skills each weekend with an outstation parish community outside Sunyani town. Ghana went through a difficult political phase during Jim’s service there. Food was scarce and tension was never far from the surface, and Jim was  a strong support for the small Irish team serving in Ghana in those years.

Many years of his life were devoted to the art of Spiritual Direction. It was to this work that he returned in 1986 when he was assigned once more to the Major Seminary of SS Peter and Paul in Ibadan, Nigeria. A quiet and utterly discreet person, he possessed the ideal temperament for such work. His dedication and commitment were legendary. He devoted long hours to the work, giving each student the best personal attention. Though responsible for well over one hundred seminarians, each student was seen for a half-hour interview at least six times each academic year. Jim lived at the seminary very frugally and simply; he regularly gave away his meagre pocket money to help poor students with transport expenses etc.

Seminary life was not completely all work and no play. He played a regular, mostly weekly, game of golf, quite skilfully too it must be said, with his friend and classmate Fr Jim O’Hea. Leaving at 7am for the course he was back again in his seminary office by mid-morning.

Ill health, most especially increasing difficulties with hearing, which would seriously impact on the art of Spiritual Direction, made it necessary for him to retire from this work, and he returned to Ireland in 2003. He lived with his sister Bernie for the next four years and immersed himself in the lives of the different generations of his family, while helping out now and then in the local parish of St Joseph’s, Mayfield.

I suppose one could say that Jimmy has now gone to meet the ultimate Spiritual Director. As he goes home to God, he will be missed by his family, friends and colleagues in the SMA. We can be consoled that his good deeds will survive him.