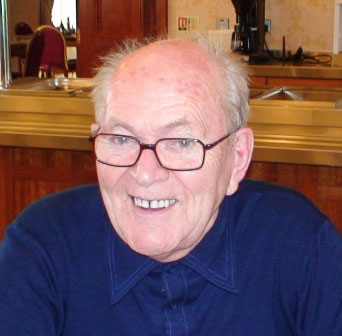 Hugh McKeown, the son of Hugh P McKeown and Anna (née Keenan), was born in Belfast on 30 March 1925. The family lived on the Glen Road in the city. He is survived by his brother, Gabriel, and three sisters, Marie (Aylward), Frances (McGivern) and Eithne (Kelly).

Fr. Hugh began his primary education at CBS Barrack St., Belfast where he spent four years before moving to the same school for his secondary education. He has fond memories of his time spent with the Christian Brothers and remembers in particular, Bro. Ryan, whom he described as the best teacher he ever knew and who “had a knack of making complex things sound terribly simple and he never had recourse to force of any kind.”

His first contact with the SMA he attributes to a letter he and a school friend wrote to the SMA Novitiate at Cloughballymore, Co. Galway. ‘We were cycling from school one Saturday morning when my friend said there was a great place in the West (the SMA Novitiate in Galway) which we could join and get to Africa’. They received a reply from Fr. John Levins SMA who indicated that they should get the next train. However, their schoolboy adventurousness didn’t extend to taking the offer seriously. A short time afterwards Fr. Levins wrote to Fr. Joe Donaghy SMA in Dromantine asking him to make contact with Hugh and his friend. One summer morning Fr. Donaghy called at Hugh’s home. ‘I was anxious to get rid of him as quick as possible’, said Fr. Hugh, ‘but I listened to him and he was very nice’. When he got the exam results in the summer he decided to write to Fr. Levins again and was accepted for the Novitiate. Things took off from there and Hugh began his missionary formation at the SMA Novitiate before proceeding to begin his theological studies at Dromantine College in preparation for ordination.

He became a member of the Society of African Missions on 2 July 1944. Along with fourteen classmates he was ordained a priest in St Colman’s Cathedral, Newry on 13 June 1948. He said his first Mass at St. John’s parish church on the Falls Road.

The SMA saw the importance of education in the work of evangelization. As a result, Hugh was sent to the University College, Cork to study for a BSc degree. However, sickness intervened and when he recovered he changed to Arts and graduated in 1952 with a BA in history and geography.

In October 1952 he set sail for Nigeria and took up his first appointment at St. Gregory’s College, Lagos where he was a tutor and bursar. In 1956 he was transferred to St. Leo’s Teacher Training College in Abeokuta. In 1968 he became Principal and helped nurse the college through a transition period when it became a co-ed until he was succeeded by a local Nigerian Principal.

Hugh McKeown had an amazing gift for repairing all sorts of things – be it burst pipes, electrical faults, car engines etc. It was a gift which was to make him an invaluable asset in any setting – be in Ireland or Africa.

In 1968 he was appointed Bursar in SMA Sacred Heart College, Ballinafad, Co Mayo. In 1973 Hugh was asked to be Bursar at the newly-constructed SMA house in Maynooth, from where our seminarians attended St Patrick’s College for priestly studies. The teething problems associated with a modern new building provided Hugh with a range of challenges which his maintenance skills couldn’t resist.

In 1982 he decided to face a fresh challenge and took up an appointment in St Paul’s Seminary, Gbarnga in Liberia where he spent a few years before transferring to the Diocese of Cape Palmas. In 1989 he returned to Ireland and took up pastoral work in Killough parish in the Diocese of Down & Connor. In 1992 he returned to Africa to work in Livingstone and Ndola Diocese in Zambia where he remained until 1996 when sickness forced him home. Since 1996 he has been living in retirement in Dromantine. During these years Hugh occupied his time with many hobbies, including building model ships. Dromantine has several beautiful examples of his amazing work.

Hugh was hospitalised in Newry in September. After his discharge he asked to come to the St Theresa’s Nursing Unit in Blackrock Road. He was with this SMA community for less than two weeks when the Lord called him home.

His remains were received into the SMA community chapel in Blackrock Road on Sunday, 9 October. Following Mass on Monday his body was brought back to the African Missions, Dromantine, Newry, Co Down. In accordance with his wishes, Fr Hugh was buried alongside his parents and brother in the family plot in Milltown cemetery, Belfast on Wednesday, 12 October after a Funeral Mass in Dromantine celebrated by Fr Damian Bresnahan SMA, Provincial Councillor and other SMA priests.  Read Funeral homily here.

May Fr Hugh rest in peace.