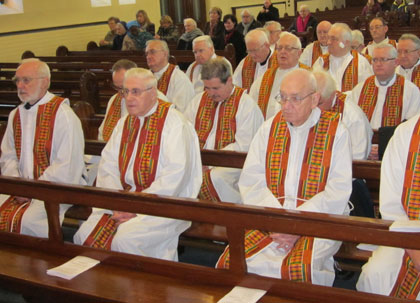 Monday, 20 December, 5pm
The remains of Fr Tony were received by Fr Sean Lynch SMA and following the usual prayers for the reception of the body the SMA community recited the Evening Prayer for the Dead. At 7pm the community, along with some friends of Fr Tony and OLA Sisters, recited the Rosary.

Tuesday, 21 December, 6.30pm
Fr Malachy Flanagan led the prayers before the removal of Fr Tony’s remains to St Joseph’s SMA Parish, Wilton. Before the prayers and Rosary, Fr Flanagan shared some stories with us about Fr Tony:

As part of my pastoral training before Ordination, I lived for some months with Fr Tony in Christ the King parish (CKC), Odo-Ona, Ibadan (in 1985/86). During that time I found Fr Tony to be a gentle person to live with, one held in very high esteem by the parishioners.
Tony was an accomplished musician on the Tin whistle and was often called on to perform at social gatherings. During his time in CKC he founded a Pipe band. Tin whistles and drums (which came from Dungloe in Tony’s native Donegal) were the most important instruments of the Band and they were highly sought after by other parishes to ‘perform’ at various parish and other events.
Christopher Emokhare was one of the band members at that time. Earlier this year that same man, now Fr Christopher Emokhare SMA, came to visit Fr Tony in Blackrock Road. During their visit, Fr Christopher took a Tin whistle from his pocket and played a tune for his teacher! How it must have made Tony smile.

After the conclusion of the Rosary we accompanied Fr Tony on his final journey to Wilton.

Reception of the remains of Fr Tony at St Joseph’s Church, Wilton

Fr Dan Cashman SMA received the remains and led the prayers. During the ceremony Fr Dan welcomed everyone, especially John Coll, Bridie Cosgrove, Mary and Tom Leahy and their son Dáire (all friends of Fr Tony’s), Fr Dan spoke of Fr Tony in the following words:

“Apart from a few unscheduled meetings with Fr Tony in Ibadan I can’t say I knew him well. He was certainly not one who promoted himself, preferring to leave others take the limelight. A friend of mine, from Delta State in Nigeria, who was Tony’s parishoioner used to describe him as the ‘quiet Fada’ in contrast to others parish priests he had known.
Our first reading speaks of the servant ‘who does not shout aloud in the streets nor break the crushed reed’. These words I feel are not an unrealistic description of the life of Fr Tony.
There is one fact that all of us will agree on. He had a love for choral singing. In all the parishes he worked he established not just one parish choir but multiple choirs. From our experience it takes a man with the wisdom of Solomon and the patience of Job to juggle these choirs and keep all of them happy.Tony had those skills.
God called Fr Tony home just in time for him to rehearse with the Angelic choirs as they sign a welcome song for the Saviour of the world. Glory to God in the highest and peace to God’s people on earth. Fr Tony will be no stranger in that choir.
May Fr Tony rest in peace.” Fr Fachtna O’Driscoll, SMA Provincial Leader, assisted by Bishop Kieran O’Reilly SMA (of Killaloe) and more than 30 other priests concelebrated the Funeral Mass. They were joined by some of Fr Tony’s friends who had made the long, and difficult, journey from Cavan and Donegal and Sisters from different Congregations, including Our Lady of Apostles and the Eucharistic Heart of Jesus. Some of the staff from St Theresa’s Nursing unit who cared so well for Tony in his latter years also attended. Brother Jim Redmond SMA and Fr Angelo Lafferty SMA provided the music for the Mass.

A poignant moment during the Mass was when Joanne Quirke played an Irish Air on the Tin Whistle reminding us of Tony’s own skill with that instrument and his love of music. At the end of Mass we accompanied Tony to his final resting place. His friends from home accompanied his mortal remains to the adjoining SMA Cemetery. There, Fr O’Driscoll commended him to the ground until the Day of Resurrection. During the blessing of Fr Tony’s remains Joanne again played a tune to accompany the incense as it rose to the heavens. Fr Hugh Harkin SMA, who remembers a young Fr Anthony O’Donnell SMA visiting St Eunan’s College, Letterkenny to talk about ‘the missions’, recited a decade of the Rosary.

Though it was a bitterly cold day and the snow lay thick on the surrounding graves the silence in the cemetery was noticeable. Again a reminder to us of the quiet man we had just, for a while, bidden Goodbye to.

A message from the Most Rev Felix Alaba Job, Archbishop of Ibadan, was read out by Fr O’Driscoll. The text of the message:

“Fr O’Donnell has gone for a just reward. We shall accompany him with Masses from all over the Archdiocese, especially from all the parishes where he served. The entire Archdiocese of Ibadan fondly remembers him and sends condolences to the O’Donnell family, friends and the SMA.” +Felix Ade Job, Archbishop of Ibadan

Fr Anthony, as we was known to his friends at home, has gone to God. Rest in peace until we meet again.