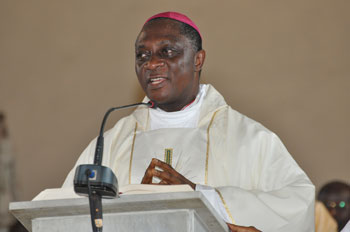 The Church in Lagos came out in style on Saturday 9 March 2013, at St Leo’s Ikeja, to commemorate with the SMA the first Mass celebrated in Nigeria in modern times. On 9 March 1862, Fr Francesco Borghero SMA celebrated Mass in the home of an Italian trader, Mr Carena near the present Holy Cross Cathedral, 151 years ago to the day. This first Mass was also the birth of the Church in Nigeria.

The principal celebrant of the Mass was the Archbishop of Lagos, Most Rev Dr Alfred Martins, assisted by Bishop Albert Fasina of Ijebu-Ode and up to eighty priests. Among the concelebrating priests were Monsignors Aniagwu, Okodua, Hoteyin, Ogunmodede, Boyo and, at the age of 102, Monsignor Pedro Martins.

Many other congregations sent representatives including the St Patrick’s (Kiltegan) Fathers who were represented by Frs Pat Murphy and Tommy Hayden. Most SMA’s who could be there were present. The SMA Regional Superior, Fr Maurice Henry, from Abuja, and Fr Tom Treacy from Kano travelled long distances to honour the occasion.

Sisters even surpassed the priests in numbers with OLA Sisters led by their Provincial Sr Assumpta Mordi as well as Sisters from the following Congregations: Eucharistic Heart of Jesus, St Louis, Holy Child, Franciscans of the Immacualte Conception, Paulines and Carmelites. At least 600 others attended, which was much less than expected. A very moving part of the ceremony was the offertory procession when a beautifully-sculpted image of Fr Francesco Borghero SMA ‘appeared’ in a boat holding an open bible in his hands, borne aloft by six SMA seminarians accompanied by a troupe of young Nigerians in traditional dress dancing their way to the altar to the thunderous applause of the congregation. As the boat came up the Church the commentator used the words of Pope-Emeritus Benedict in his last general audience and applied them to the continuing journey of the SMA and the Church in Lagos:

“...I can say that the Lord has truly guided me, He has been close to me, and I could feel His presence every day. It has been a stretch of the Church’s journey, which has had moments of joy and light, but also difficult moments; I felt like St. Peter and the Apostles in the boat on the Sea of Galilee: the Lord has given us many days of sunshine and gentle breezes, days when the fishing has been plentiful, and there were also times when the water was rough and the wind against us, as in the whole history of the Church, and the Lord seemed to sleep. But I always knew that the Lord is in the boat, and I always knew that the boat of the Church is not mine, not ours, but it is His. And He will not let her sink. It is He who leads it, certainly also through the men he has chosen, because so He has willed it. This was and is a certainty that nothing can obscure. And that is why today my heart is filled with gratitude to God because He has never left me or the Church without His consolation, His light, His love.”

Reflecting on the journey, Archbishop Martins said that when Fr. Borghero SMA said the first Mass there was only one priest and no religious in Lagos but that now there were 120 local clergy, 78 from other dioceses and 100 religious and Society priests.

In his 45 minute homily, which deserves to be read in its entirety, Fr. Eddie Hartnett SMA gave an historical overview of the growth of the Church and the work of the SMA, not only in Lagos, but throughout Nigeria. Much to the delight of the congregation he moved effortlessly from English to Yoruba, to singing in Ogun and back again. It was a time for once, he said, to blow the SMA trumpet and he did it well but gently. An interesting point that he made was that before the SMA came on the scene there very many efforts to establish the Church which did not bear fruit as they were more or less freelance efforts. What made the SMA different was that they came with a mandate and set up structures leading to the first bishop in Lagos, Bishop Jean-Baptiste Chausse SMA in 1891 and the first Nigerian priest, Fr Paul Emechete in 1920.

He also pointed to the great contribution of the SMA to education. The letters SMA, he said, act as a kind of passport. When you tell people that you are an SMA some who are not Catholics will say, “You are an SMA, I was educated by the SMA, I am an SMA too. What can we do for you?” Towards the end of the Mass Fr. Reginald Nwachukwu SMA, Superior of the Bight of Benin, announced that the Archbishop-emeritus of Lagos, His Eminence Anthony Cardinal Okogie, had been admitted to Honorary membership in the SMA by the SMA Superior General and Council. Archbishop Martins accepted this honour on behalf of the Cardinal, who is in Rome for the Papal Conclave. Much to the delight of all present Archbishop Martins announced that henceforth the Cardinal will be addressed as His Eminence Anthony Cardinal Okogie, SMA.

In the very colourful brochure produced for the occasion, the Cardinal himself spoke of his connection with the SMA and paid tribute to the work of our missionaries: “My association with the SMA began in 1936… The association continues even in retirement and I believe it is going to be a lifelong affair, call it a romance, if you will. It is stating that much of what has happened to me over the past 76 years plus, I owe to priests of the Society of African Missions. We have journeyed together and it has been an eventful and highly rewarding journey indeed…What the SMA has achieved in Lagos and Nigeria in the past 150 years is the stuff of legend.”

The Mass lasted just over three hours and was followed by a reception in the parish hall, not a “chicken and jollof rice affair” but a full sit down meal with a variety of dishes: European, Nigerian and Chinese and different types of drinks. At the meal each guest was presented with a Borghero SMA 150 Jubilee bag filled with SMA mementos. When I asked Fr Val Hynes SMA, who was sitting beside me at the meal, “who paid for all this?” His reply was “The generosity of the people, money just kept pouring in.”

Great credit is due to the organizers of the celebration, Fr. Debres Trinkson SMA (India) assisted by Fr John Suakor SMA and Fr Henry Obiora SMA from Nigeria. As the SMA moves forward it seems that there is a change of crew and if the organization of this celebration is anything to go by, the SMA can sail into the future with confidence.

With the celebration taking place in St. Leo’s at Ikeja it was also a time for older people in the parish to ask about former crew members who in the past piloted the boat through Ikeja waters: Dan Murphy, who got the land for the Church, Jimmy Morrison, Hugh Ford who built the Church, Martin Kavanagh who wrote his most powerful letters from here, Willie Cusack, John Hannon, Mick Ryan and Jimmy Friel to name a few.

Faith of our fathers, living still
In spite of dungeon fire and sword:
Oh, how our hearts beat high with joy,
Whenever we hear that glorious word!
Faith of our Fathers! Holy Faith!
We will be true to thee till death.