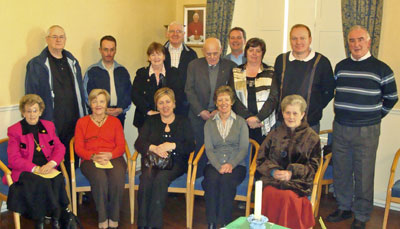 The present FVC Directors and some of their dedicated Office staff pictured here with two of the founding members of the Family Vocations Crusade after a Thanksgiving Mass in SMA Dromantine. Also in attendance was the Provincial Councillor with responsibility for Promotion work, Rev Fr Damian Bresnahan SMA.
In the centre of the picture above is Mr Tommy McKenna and the first on the left, seated, is Miss Marie Bell. Along with Fr John Joe Conlan SMA (now Dom David OSB of the Benedictine Monastery, Murroe, Co Limerick) they were part of the FVC founding members in 1959. Several others have returned to their eternal home with the Lord. Also in the picture, seated right, is Mrs Barbara McKenna.
The SMA is ever mindful and grateful for their inspirational commitment and concern for the evangelization of Africa.
But the work would not be possible without our committed lay staff who keep the different offices throughout the country running smoothly. Thanks to those who have retired and to the present staff who are the ‘voice’ at the end of the phone line when FVC members phone in to ask for prayers or for other matters.
During the past 50 years the members of the FVC – thousands of families from all over Ireland -have played an essential role in the training of more than 300 SMA priests. This they have done by their prayers, their active concern for particular students and their financial contribution each year.
FVC members agree to give a certain amount each year for a period of eight years to help defray the expenses of training our seminarians. At present we have nearly 250 studying to be SMA priests in 14 seminaries throughout the world. What exactly is the FVC?
If you would like to get more information on how to become a member of the FVC contact the SMA community in your area. Details of SMA Houses here