The Jesuit Refugee Services [JRS] have mounted an exhibition by Eritrean young people of paintings depicting their visions, fears and memories of the dangerous journey 130,000 of them have taken, fleeing their homeland. The exhibition can be seen at the Mai Aini refugee camp in northern Ethiopia [which caters for more than 18,000 refugees]. The UNHCR reported that in October 2014 there were 643,010 refugees within Ethiopia’s borders.

Faced with indefinite military conscription as well as torture at the hands of a brutal government the refugees [80% of whom are under 24 years of age] it is understandable why they flee into neighbouring Ethiopia. If they fail in their attempt they are shot under the Eritrean government’s ‘shoot to kill’ policy.

Approximately 35,000 have crossed the Mediterranean in 2014. We see TV reports etc of these and other desperate refugees risking their lives to reach Europe. Is it not understandable why they have fled? And how are they treated when they reach our shores? 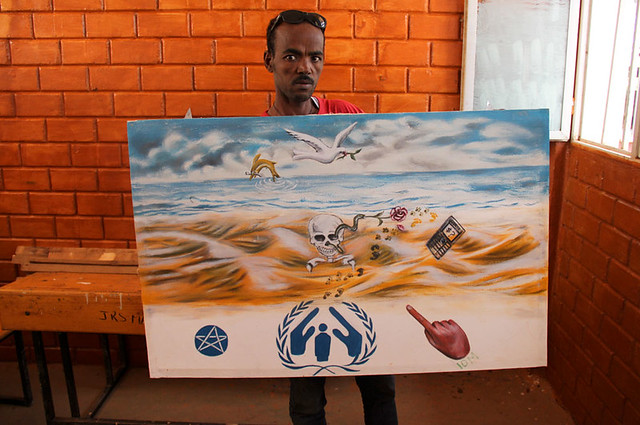 Mebrahtom Tesfay, fine arts teacher at Mai Aini refugee camp, describes his painting: “This shows the entire journey of a refugee trying to reach Europe. They go out of the UN office in Ethiopia frustrated that they have no-long term solution and decide to cross the desert to reach Europe on their own.

“If they make it to sea, they must try for their vision to reach Europe where they believe they can make money to help their family in Eritrea, but even in the sea they can die. Those who die are eaten by sea creatures.

“The bird represents their vision but you can see that even the leaf is fruitless, just like their dream. It is fruitless because even when they reach Europe there is no fruit, they cannot work and they aren’t accepted.” (Angela Wells/Jesuit Refugee Service)