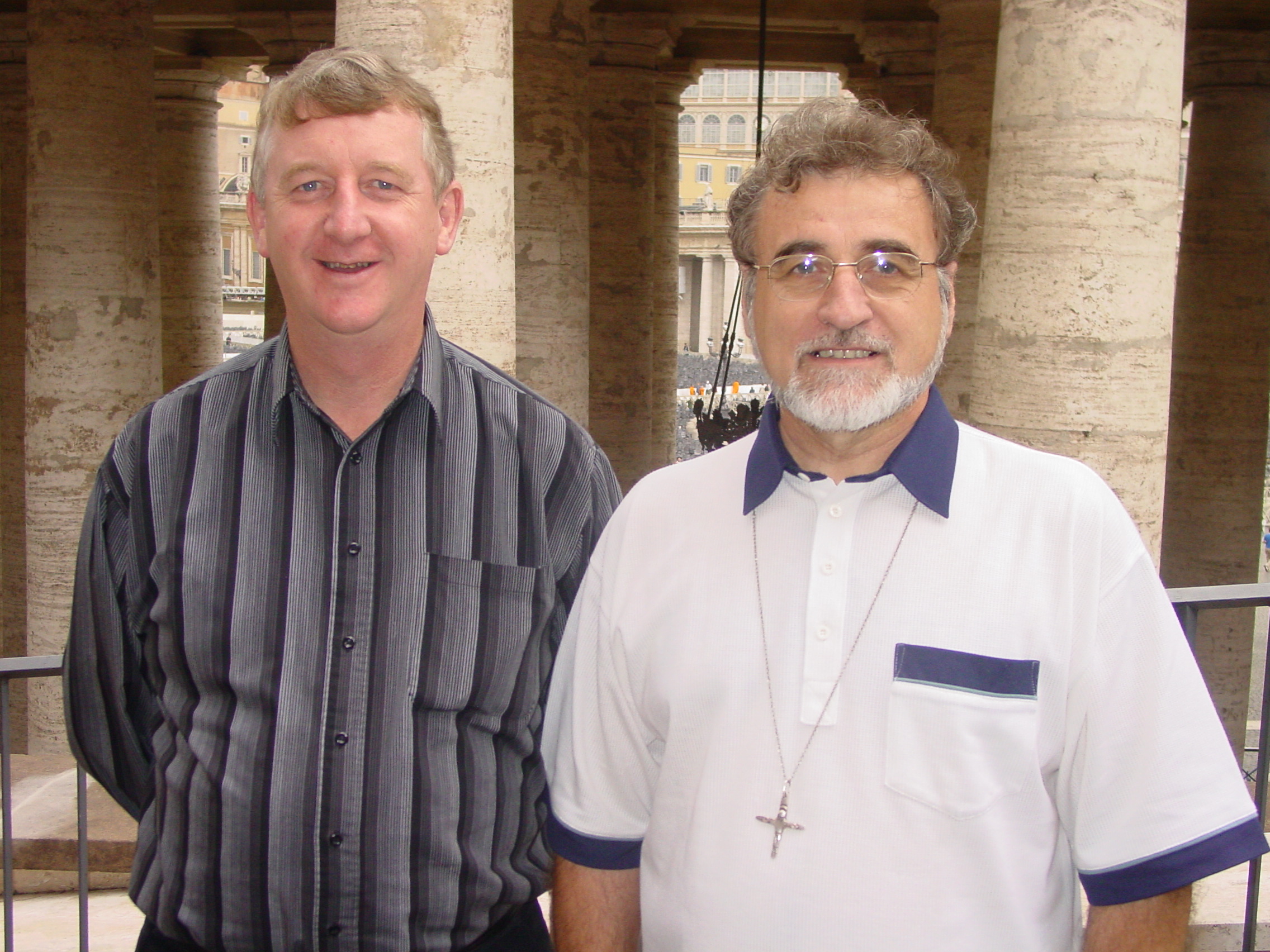 The SMA founded the first Catholic Mission in Niger in 1931.

Since then the Church has had a slow steady growth though the Catholic population is only about 20,000 (i.e. less than a fifth of one percent). Despite this small number its role in Nigerien society is greatly appreciated by the entire population, especially for its education, health and social services. Archbishop Michel Cartateguy SMA is the Archbishop of Niamey (on right of picture with Fr Fachtna O’Driscoll SMA, Irish Provincial Leader). The other diocese in the country, Maradi, is led by Bishop Ambroise Ouedraogo.

Pope tells Bishops of Burkina Faso and Niger on Ad Limina visit: “May a new missionary zeal enliven your community, so that the Gospel message is fully accepted and faithfully lived!”

Vatican City (Agenzia Fides) – “After more than a century, evangelization has already borne abundant fruit, visible through many signs of the vitality of the Church-God’s family in your countries. May a new missionary zeal enliven your community, so that the Gospel message is fully accepted and faithfully lived.” That is the appeal that was made by Pope Benedict XVI to the Bishops of Burkina Faso and Niger, whom he received in audience on March 20, during their visit ad Limina Apostolorum.
In his speech, the Pope said that “faith always needs to strengthen its roots,” and welcomed the commitment “to a healthy inculturation of faith,” and encouraged them to continue in the “missionary effort of solidarity” toward the sister Churches on the continent. Other signs of hope were shown in the efforts made by the Church to combat “the evils that prevent populations to achieve real development and the promotion of solidarity towards all and especially the most in need.”
Citing the context of the Year for Priests, the Holy Father expressed the wish that every priest be guaranteed a solid education, not only during his preparation for ordination, but for his entire ministry, “because it is essential” that the priest can devote time to deepening in his priestly life, to avoid falling into activism…May the example of John Mary Vianney awaken in the hearts of your priests, to whom I pay tribute for their brave missionary activity, a renewed awareness of their total gift to Christ and the Church, powered by a fervent prayer life and passionate love of the Lord Jesus!”
Particular expressions of thanks and encouragement were then addressed by the Pope to catechists, “necessary collaborators of the priests in proclaiming the Gospel,” who “have a key role not only in the first evangelization and the catechumenate, but also in the animation and in support of the community.” This is why the dioceses are making considerable efforts to ensure their human, intellectual, spiritual, and pastoral formation” and the Pope also encouraged them to meet their material needs, “so they can lead a dignified life.”

Also regarding formation, Benedict XVI urged the bishops of Burkina Faso and Niger to care for the formation of the laity, so that they can “take responsibility in the Church and society and be authentic witnesses of the Gospel in them” and “pay particular attention to the political and intellectual elite of your countries, who are often confronted with ideologies opposed to a Christian conception of man and society.” In particular, he mentioned the pastoral care of young people through the strengthening of the school and university chaplaincy.

The last topic touched by the Pope was on interreligious relations: the good stable climate established “can deepen the bonds of esteem and friendship, as well as cooperation among all segments of society… Thus, teaching the younger generation the fundamental values of respect and brotherhood will foster mutual understanding.” The Pope then expressed the hope that they continue to strengthen the bonds that unite Christians and Muslims in particular, “in order to advance in peace and justice and promote the common good, rejecting any temptation to violence or intolerance!” (Agenzia Fides 22/3/2010)

The complete text of the Holy Father’s address – in French – is available at the link below:

NIGER – Brief Overview of the Country

Rome (Agenzia Fides) – The Republic of Niger has an area of 1,287,000 km2 and a population of about 14 million inhabitants. It is bordered to the north by Libya and Algeria to the west by Mali and Burkina Faso, on the south by Benin and Nigeria, and east Chad.

The country’s main ethnic groups are the Hausa, the most numerous and involved in politics, followed by Zerma-Songhai, the Fulani, the Tuareg, and the Berberi. Picture shows part of the Maradi Festival celebrations.

History
Niger has been since time immemorial a hub for economic exchanges between the inhabitants of the Maghreb and Chad. Virtually unknown to Europeans for a long time, in 1890 an agreement between France and Britain made the country enter French orbit. In 1922, Niger became a French colony in French West Africa. In 1960, independence was proclaimed.

Niger is a republic governed by a President elected every 5 years. Even the Legislative Assembly is renewed every 5 years. The history of independence is marked by a series of military coups. The last one took place on February 18, 2010 and overthrew President Mamadou Tandja, who had forced a change in the Constitution in order to obtain a third term.

Another recurring crises is related to the integration of the nomadic Tuareg, which triggered a series of rebellions in the last 20 years.

Economy
The country is rich in raw materials: uranium (Niger is home to 7.5% of global uranium production), iron, silver, platinum, and titanium. Niger, however, ranks 174 (out of 179) on the Human Development Index of the United Nations. 90% of the population is illiterate and lives on subsistence farming and pastoralism.

Religion
90% of Niger’s population is Muslim. Approximately 250,000 people belong to traditional religion. Catholics are about 20,000 (0.20% of the population).

The work of evangelization was begun by the Fathers of the Society of African Missions (SMA) who founded the first mission in Niamey in 1931. The mission was established as a Prefecture Apostolic on April 28, 1942 and elevated to a diocese on March 21, 1961. Working there are the Redemptorist Fathers, missionaries of SMA, the Missionaries of Africa (White Fathers), the Little Brothers of Jesus (of Blessed Charles de Foucauld), the Brothers of Christian Schools, and 7 female religious congregations.
On June 25, 2007, Pope Benedict XVI created the new Ecclesiastical Province of Niamey, which has as its suffragan the Diocese of Maradi.

The complete text of the Holy Father’s address – in French – is available at the link below: