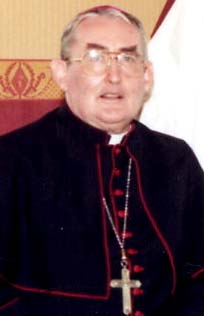 Rt Rev Bishop John Moore SMA passed away at 1.30am on the morning of 20 January 2010 in St Vincent’s Hospital, Elm Park, Dublin. Bishop Moore had been undergoing medical tests in recent months and his death was unexpected. He was aged 68 years.

Bishop Moore was born on 12 January 1942 in the parish of Harold’s Cross, Dublin, in the Archdiocese of Dublin, the second son of John and Mary Moore (née Broughal). He is survived by his brother Gerard and younger sister Mary.

He attended the Christian Brothers Secondary School, Synge Street, Dublin from 1955 to 1959. In that year he entered the Spiritual Year programme of the Society of African Missions (SMA) at Cloughballymore, Kilcolgan, Co Galway. In 1960 he became a member of the SMA. From 1960 to 1966 he studied Philosophy and Theology at the SMA Major seminary at Dromantine, Newry, Co Down. John was admitted as a permanent member of the SMA on 15 June 1965. Right Reverend Eugene Doherty, Bishop of Dromore, ordained him to the priesthood on 20 December 1965 in St Colman’s Cathedral, Newry.

He was appointed to the north of Nigeria, arriving there in October 1966. After completing his Language learning programme in Kagoro, Kaduna State, John was appointed to the then diocese of Jos. Among the parishes where John ministerd are Akwanga, Kwa, Shendam, Kafanchan, Kwande, Pankshin and Jos.

The then Father Moore visiting a village in Shendam parish

Though a Dub and a lover of all things to do with the city John was a great man for ‘bush work’ – going into the countryside and establishing parishes. That meant he had to be a ‘jack of all trades’ and during his 44 years in Nigeria John was responsible for the digging of wells, building schools, clinics and churches. Many of these projects were funded from money collected in Ireland by John and the SMA as well as several funding agencies. When he came home in December 2009 he brought with him his Report on the latest school project he was working on – funded by Irish Aid (the Irish government agency that funds many development projects all over Africa).

From 1983-1984 he was chosen to serve as SMA Society Superior in Jos. During his 44 years as a priest and bishop in Nigeria he rejoiced in seeing the creation of three new dioceses from the original diocese of Jos: Kafanchan, Shendam and Bauchi. He continued to minister in Nigeria until his return to Ireland recently for medical treatment.

The Vicariate Apostolic of Bauchi was created on 5 July 1996 with territory taken from the Archdiocese of Jos. It covers 64,605 square kilometers in Bauchi State. John was appointed as the Vicar Apostolic. He was ordained titular bishop of Gigthi on 7 November 1996 by Archbishop Gabriel Gonsum Ganaka, Archbishop of Jos.

Bishop Moore with parishioners in Bauchi

Bauchi is a predominately Muslim area and the new Bishop quickly set about creating good relationships with the local Muslim leaders. His fluency in Hausa and several other Nigerian languages was of great assistance to him as it demonstrated his respect for the people among whom he served.

On 31 December 2003 Bauchi was raised to the status of a diocese with John as its first Bishop. He was installed as Bishop on 11 March 2004 at the Cathedral of St John the Evangelist, Bauchi.

With its population of 5.5 million and an area of 64,000 sq kilometres Bauchi diocese is 80% the size of Ireland and a greater population. At the time he had 12 parishes with 23 priests and 10 religious (sisters and brothers) to assist him in caring for the 68,000 Catholic spread over this huge area. Throughout his missionary life John realised the great need to train lay people in order for the church to grow. During his 14 years in Bauchi he ensured the training of Catechists who went into the most rural of areas to lead Church services and look after development projects. Today there are 80 women and men Catechists in the diocese of Bauchi.

The progress since 1996 is impressive: from twelve parishes we now have twenty; the number of priests has gone from 23 to 42 (including 29 diocesan clergy); there are 9 Sisters (OLA, Holy Child and St Louis Congregations) and 4 Presentation Brothers. There are 22 seminarians training for the priesthood.

He is sadly mourned by his brother Gerard, his sister Mary, his sister-in-law Joan and his brother-in-law Michael, nieces, nephews, the clergy, religious and people of the Diocese of Bauchi, his brother bishops in the Nigerian Episcopal Conference and by his confreres in the Society of African Missions.

Thursday, 21 January: Prayers were said at 12.30pm in the Mortuary Chapel at St Vincent’s Hospital, Dublin followed by removal to Cork.
The remains of Bishop Moore arrive at the SMA House, Blackrock Road, Cork at 5pm. Solemn Evening Prayer for the Dead was celebrated by the SMA community and friends.
Friday, 22 January: Removal at 7pm from Blackrock Road to St Joseph’s SMA Church, Wilton.
Saturday, 23 January: The funeral Mass will be celebrated at 12 noon followed by burial in the adjoining SMA cemetery.