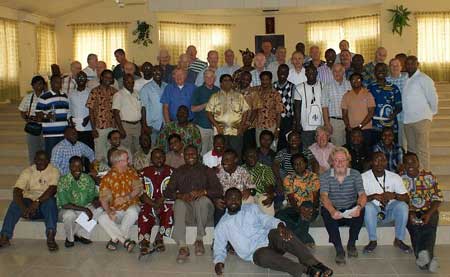 In 1983 the Society of African Missions (SMA) decided the time was right to widen its membership base. From its foundation in 1856 SMA priests and brothers were drawn from Europe and North America. Though a decision had been made in the 1950’s to admit Africans it was never acted on. Why? Because one of the aims of the SMA Founder, Bishop Melchior de Marion Brésillac, was that his missionary society would work to found a local church. And what is one of the essential signs of such a church? Local priests! If the SMA were to start recruiting young Africans – in the 1950’s – into the Society that would have taken some of them from their fledgling home churches. Thus the decision was never acted on until after the 1983 SMA General Assembly.

That Assembly decided, not only to admit Africans but also Indians. Later, the Society moved to recruit missionary vocations in the Philippines. And to relaunch the SMA in Poland, which had suffered following the Second World War (1939-1945) when the Iron Curtain blocked the flee flow of Polish SMA priests and brothers between Poland and Africa.

Several structural changes have taken place in the last 27 years. The latest has seen the creation of three separate SMA units to cater for our African members, priests and seminarians. One of these is the above-named, Bight of Benin District-in-formation.

The Bight of Benin District-in-formation is spread over four countries: Benin Republic, Niger, Nigeria and the Central African Republic (CAR).

Its 54 priests come from Benin (14 priests), CAR (7 priests) and Nigeria (33 priests). They are involved in parish ministry in 12 African countries and in Canada. Others are on Further Studies in Ireland, Italy and the USA.

Pictured here are the SMA priests working in Nigeria – some of them from the Central African Republic, Ghana, Ireland, India, Ivory Coast, Kenya, Tanzania and Togo. Our priests are involved in the following ministries: parishes (particularly in areas of Primary Evangelization), administering programmes for those suffering from HIV/Aids, ministering to marginalised groups in some countries, literacy programmes, searching for sources of clean water, developing relations with Islam, building and administering schools, formation of SMA seminarians etc.

Those ordained Deacon in 2010 will, please God, be ordained priests in 2011. They are completing their studies at one of the three Houses of Theology the SMA has in Africa – in Kenya, Nigeria and the Ivory Coast.

The District-in-formation also has ‘seconded’ members (from other parts of the Society) – 11 of them working fulltime in the Formation Houses, Fundraising or Administration of the unit.

The Superior, Fr Basil Soyoye (from Nigeria) is assisted by  Fr Francis Barka-Nado (Central African Republic). The latter is also the Bursar for the District-in-formation. The DF Secretary is Fr Patrice Dossoumou (Benin Republic).  Their residence is the SMA House, GPO Box 1298, Ibadan, Nigeria.

The missionary priorities of the District-in-formation can be summed up as “a commitment to mission ad gentes and ad vitam, particularly in areas of Primary Evangelization”.