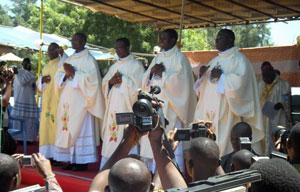 On Sunday 18 April 2010 the Catholic Church in Benin Republic began the 150th Anniversary celebrations of its birth. During the Mass we participated in the ordination of four young Beninois as SMA priests. They are Fathers Valentin Kobolou Fadegnon, Anselme Ishola Yonlonfoun, Bishop Ganye, Désiré Omotunde Salako and José Florent Kakpo.

Why was Agoué chosen as the place for our celebration? According to Fr Péloy, Agoué was founded in 1821 by several hundred Mina people who came from Petiti-Popo, now Aného, on the Benin / Togo border.

Then 400 to 500 freed slaves settled there. In 1835 a certain Joaquim Almeida built a chapel, which is now considered to be the first erected in Benin. Between 1846 and 1860, several visiting priests celebrated baptisms. Its is estimated that in 1861, when Frs Borghero and Fernandez landed in Benin, there were about 800 baptized in Ouidah and about the same number in Agoué.

On 28 August 1860 the Apostolic Vicariate of Dahomey was erected and it was confided to the care of the Society of African Missions (SMA). On 2 December 1860, Fr Borghero was appointed superior “ad interim” of the Vicariate, based in Ouidah. He, along with Fr Fernandez landed in Ouidah on 18 April 1861. They were followed by Fr Lafitte (26 September) and Frs Courdioux and Cloud (11 November).

In February 1871 the missionaries had to flee Ouidah. The slave traders incited the people against the missionaries. The death of an orphan in the mission added fuel to the fire. The Voodoo priests stirred up the population against the Priests and the King of Abomey’s representative asked them to leave. They were driven out and took refuge in Porto-Novo where the mission was steadily developing.

Fr Thillier visited Agoué in April and September 1871. He baptized many people, a little too quickly.

The Agoué mission was officially founded on 30 May 1874 by Frs Bouche and Ménager. Their first task was to open a school. A notebook found at Agoué gives the name of all the students and the teachers who have passed through this school between 1874 and 1914; 658 pupils in 40 years.

In 1878 the first Sisters of Our Lady of Apostles (OLA) arrived.

On 26 June 1883 the Apostolic Vicariate was divided into two: the eastern part which included four successful missions, Lagos, Porto-Novo, Tokpo and Abeokouta retained the original title (Bight of Benin), with Fr Chausse as its Vicar Apostolic.

In the West there was only one mission firmly established: Agoué. It became the Apostolic Prefecture of Dahomey with Fr Ménager as its first Prefect Apostolic. Between 1880 – 1901 fourteen missionaries were buried there: 5 SMA (3 priests and 2 brothers) and 9 OLA Sisters. In 1884 the priests returned to work again in Ouidah.

In 1888, Fr Lecron replaced Fr Ménager as Prefect Apostolic. He founded Keta, Grand-Popo, Athimé and transferred the headquarters to Ouidah where he died on 22 June 1895 at 40 years of age.

Fr Bricet replaced him. He returned to Europe in 1900 and resigned so that the Prefecture was raised to the level of a Vicariate. Fr Dartois was appointed as the first Vicar Apostolic with his headquarters in Ouidah.

Footnote: At the end of the Ordination Mass the four newly-ordained were given their Mission Cross by the bishop and everyone was informed of their first priestly appointment: Valentin and Jose will go to Nigeria, Desire to Tanzania and Anselme will go to the Central African Republic.