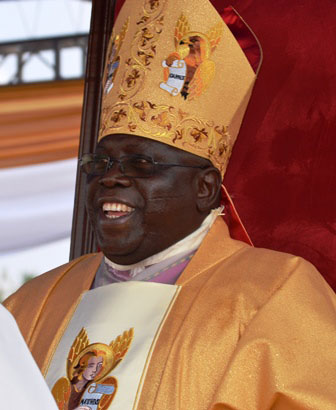 With a light harmattan haze enveloping Ibadan, crowds converged from every direction on the grounds of SS Peter and Paul Seminary on Friday, 24 January 2014, for the installation of the second Archbishop of Ibadan, Most Rev Gabriel Abegunrin, former bishop of Oshogbo (pictured right).

Traffic was chaotic as one of the main arteries into Ibadan was clogged by the morning rush hour traffic and those heading for the installation. Police, Traffic wardens, Federal Road Safety personnel, church wardens, often giving contrary instructions, battled to bring order into the chaos and keep the traffic moving. Those going to the celebration were often oblivious to their instructions and their own safety as they hurried to get a good vantage point in the tented square facing the altar in the football field of the seminary.

Over forty bishops attended the ceremony. Four hundred specially designed take-away chasubles and stoles were provided for priests but this number was not sufficient. Various religious congregations were present in great numbers confirming Archbishop Job’s statement that “Ibadan is the Rome of Africa”. Dignitaries including the Governors of Oyo and Ekiti States, traditional rulers and politicians were given places of honour.

The ceremony began with Archbishop Job giving a 45 minute farewell address entitled “Feeding the Flock of God – The Journey of my life.” He thanked God for choosing him, as the youngest Nigerian bishop ever and the longest serving. He described his journey of 43 years as bishop as “long but fruitful, tedious but rewarding.” He expressed gratitude to Bishop Finn SMA who established the diocese on a good foundation in 1953. When he took over the diocese there were just two diocesan priests. Now there are 87. There were 15 parishes now there are 43 and countless outstations. He spoke in detail about the different apostolates in the Archdiocese: Health, Education, Social Development, Justice and Peace and Youth Apostolate which now has a world rated Youth Centre on 250 acres of land at Lantate. He thanked everyone for their support over the years and made special mention of the SMA and OLA “our founding missionaries.” He ended by saying “I know there will always be a job for Job. Having worked in the pastoral ministry for 47 years without a holiday, I will go on a lengthy vacation and on return become by residence a curate to the parish priest of St Joseph’s Oke Ado and an unofficial auxiliary to Archbishop Abegunrin.”

It was now time for the Papal Nuncio, Archbishop Augustine Kasuja to take centre stage and lead the new Archbishop to his Episcopal Chair. “By the mandate given to me by the Apostolic See, I hereby invite Most Rev Dr Gabriel Abegunrin to be installed as the Archbishop of Ibadan.” The announcement was followed by the blast of a trumpet and the loud applause of the crowd. Balloons were released into the air and the choir rendered a special celebratory song.

Most Rev Gabriel Abegunrin, aged 66, was the former bishop of Oshogbo. He was born in Iwere-Ile in Iwajowa council area of Oyo State. He attended St. Kizito Minor Seminary, Ede, Osun State and SS Peter and Paul Major Seminary. He was ordained priest on 21 April 1979 at Iwere-Ile by Bishop Julius Adelakun. He moved to the Pontifical Urban University in Rome in 1984, where he obtained a doctorate degree in Canon Law in 1988. After that he was the administrator of St. Benedict’s Cathedral, Osogbo and worked as a parish priest in Oyo, Ilesa and Ogbomoso before being appointed as the first Catholic Bishop of Osogbo diocese in 1995. In 2010, he came to Ireland for the ordination the SMA Superior General, Fr Kieran O’Reilly, as bishop of Killaloe, stayed in Blackrock Road and was driven from Blackrock Road to the ceremony by Malachy Flanagan.

A fifty minute well-crafted homily was preached by Bishop Michael Olatunji Fagun, former bishop of Ekiti. He began by comparing the experience of Archbishop Gabriel being chosen as Archbishop of Ibadan as similar to that of Jacob at Bethel and went on “As God assured Jacob of being with him so as to have a good grip over the land he had reached so God now assures Archbishop Abegunrin of a strong spiritual grip over Ibadan Archdiocese with its flourishing faithful Christian communities.” He lauded the spirit of Ibadan as a cosmopolitan city welcoming all comers where Christian and Muslims live in peace together. He spoke of it as a truly African city, unlike Lagos and Kaduna which he described as “colonial cities.”

He then traced the history of the Catholic Church in Ibadan beginning with the arrival of two SMA priests, Frs Jean Baptiste Chaussse and Theodore Holley, 130 years ago. Ibadan today is a city with a population of 2.3 million people, less than 10% of them Catholic. What an onerous task awaits the new Archbishop! he interjected.

Fr John O’Hea SMA, a missionary in Ibadan for more than 53 years, greets his new Ordinary and promises him obedience and respect.

He spoke at length about leadership in Nigeria saying, “It is unfortunate that the wrong concept of leadership in our society has insidiously crept into the Catholic Church. The image of leadership in this country has debased what true leadership should be. Many misunderstand leadership as dominance and a sinecure post, not service and hard work. It is used for self-advantage, not self-giving; for honour, power and vain glory not humility and self-sacrifice for the benefit of the led.” He put forward Christ, the Good Shepherd, who gave his life for his flock as the model of true leadership. In our own time, he said, Pope Francis and Nelson Mandela model this type of leadership.

Speaking to priests, he told them not to be career priests who try to make their mark for self-glory, self-reputation, self-fulfillment, esteem and satisfaction, mostly for worldly values and material gain. On the contrary, the vocation to the priesthood is one of self-denial and self-giving, following in the footsteps of Jesus Christ. Procession of Cardinals, Bishops and clergy after the Mass

He ended on a rather somber note, in contrast to the general mood of the day. “Let us pray for our country Nigeria that is getting deeper and deeper into distress, with masses living in poverty in the midst of plenty, all due to bad government. All is not well with Nigeria. All is not lost either. There is hope. May the light of hope inflame the hearts of our leaders and citizenry. From all evil may the Lord deliver us.”

From there the Mass went on as usual, but with the ceremony nearing the four and a half hour mark the harmattan lifted and the sun blazing down penetrating even through the canopies and with many bishops leaving the altar to catch flights in Lagos the Archbishop brought the liturgical part of the day to a conclusion with a few short appropriate words.

Archbishop Abegunrin addresses his flock for the first time

“I am grateful to God for overlooking my weakness to make me a useful instrument in His hands, to serve in the Church of His son Jesus Christ. I promise to remain faithful to God and the Church and to be available to my duty as the shepherd of the flock of God in Ibadan. I am aware of the challenges ahead but because of the great work done by my predecessor, Archbishop Job, and with the love of God, they are surmountable and with the support of you the people of Ibadan I am ready to face them.”

At the end of the celebration the bishops and invited guests headed for the University of Ibadan for a special meal while the tented square became a giant cafeteria with food and drinks for everyone.

Leaving tired and exhausted, one could not but join with lay faithful, the real stars of the day, as the sang, “This is the day the Lord has made let us be glad and rejoice in it” and remember with gratitude Theodore Holley and Jean Baptiste Chausse and the many SMA and OLA missionaries (as well as those from other groups who came more recently) who worked in Ibadan over the years and made this day possible.

But great pride must be taken by the people of Ibadan who responded to the preaching of the Gospel and are the pillars of the Catholic Church in this great city.