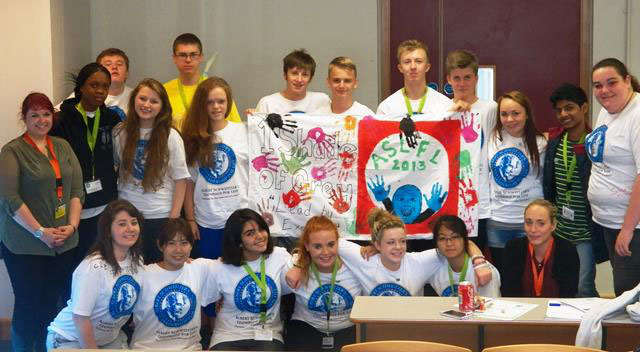 Esther Ade-Adeleye is a student at the Maryland Comprehensive Secondary School, Maryland, Lagos, Nigeria. This school was founded by the Sisters of Our Lady of Apostles (OLA) in 1969. From 1979 – 2001 it was under State control as the government seized all religious-owned schools. However, in 2001, recognizing the problems the takeover of schools caused the various State governments offered to return schools to the different churches and other groups. In some cases this offer was declined as the schools had fallen into such a state of disrepair etc that it would prove impossible to restore them. However, Cardinal Anthony Olubunmi Okogie did agree to take back some schools, including Maryland which was now a co-educational school catering for over 600 pupils, from all denominations and religious backgrounds. The School Administrator is Sister Esther Edeko OLA. A second OLA Sister is also involved in the school.

Esther will graduate this year and hopes to study Paediatrics. At the initiative of Sister Esther, it was decided that Maryland would send a group to the Albert Schweitzer Leadership for Life Conference in Ireland. Six students, one  male teacher and Sr Esther were to travel to Ireland for the event. And so a massive fundraising effort got underway. The student body fundraised to cover flight costs for their schoolmates (4 girls and 2 boys), aided by the parents of the six; the PTA sponsored the costs of the teacher and the Archbishop of Lagos and some other friends also contributed. They also had a pupil from Concord School in Ibadan, to the north of Lagos, join with them. Below is an edited account of Esther’s experience.

On 27 July 2013 students from different parts of the world, gathered at the National University of Ireland, Maynooth to participate in the Albert Schweitzer’s Leadership for Life programme. I was privileged to be one of them, as well as five other students from my school in Nigeria.

I remember the first set of people we met on arrival at the University: the Americans, who greeted us warmly. That for me was a good start and, thankfully, most of the people we met at that conference were the friendliest we had ever met. Esther (standing 2nd from left) with her ASLFL group

The ASLFL is committed to developing and presenting meaningful, state-of-the-art youth leadership and mentorship programs to 15-18 year-olds of good character with demonstrable leadership skills, high aspirations and an interest in community service around the globe. Named after one of the world’s greatest humanitarian, Albert Schweitzer, the ASLFL motivates young people to achieve their goals.

The ASLFL encourages young people to cultivate an understanding and appreciate multi-culturalism; teaching all students to protect the global environment without compromising the needs, wants and expectations of those who inhabit the globe; instilling a passion for community service, boosting self-confidence, improving interpersonal and group communication skills as well as developing an awareness of social needs and the issues therein.

The 2013 ASLFL brought students from different parts of the world: Canada, England, India, Ireland, Kenya, Nigeria, Northern Ireland, Palestine, South Korea and the USA. We gathered at St Patrick’s College, Maynooth from 27 July to 3 August. It was an enriching encounter.

Our quest ‘to Live, to Love, to Lead and to Learn’ commenced as we arrived for the programme. Each participant was given a room and after lunch we were given a tour of the South Campus of the University.

As the Agenda for the next day, a Sunday, was ‘fully loaded’, our School Administrator, Sister Esther Edeko OLA, ensured that we attended the Saturday vigil mass in the parish Church. The celebration was solemn and we felt welcome as visitors to the parish were prayed for during the Prayers of the Faithful.

We began the next day with a tour of Dublin. We visited many places including the Phoenix Park where we had some time at the Dublin Zoo, saw Arus an Uachtaráin (residence of the Irish President, Mr Michael D Higgins) and the Duke of Wellington Monument where the 1932 Eucharistic Congress was celebrated. We also visited the Criminal Courts of Justice and St. Patrick’s Cathedral (Church of Ireland – Anglican) where we saw many statues, bought souvenirs and enjoyed the beautiful grounds. We also visited the Oscar Wilde Park and had lunch at a McDonalds restaurant. We did some window-shopping and some of us actually bought some things! Our tour also took us to Trinity College and we were shown around the library where we saw one of Ireland’s most precious and historic manuscripts – the Book of Kells.

Dinner was at the National Concert Hall after a brief history of the building was explained to us. We then attended the World Choral Festival that evening. It was an incredible experience. While some of us enjoyed most of the performance, some could hardly stay awake! I was particularly fascinated throughout the performance as I listened to ‘Leonardo dreams of his flying machine’ for the first time. It was a great piece. Other songs performed were: My dear sweetheart, Adieu; the Hallelujah Chorus and the Funk.

The conference began properly on Monday, 29 July when the Irish delegates arrived to join the International delegates. There was an opening ceremony where the ASLFL Ambassador, Mr Matt McCoy, was introduced to us.

The next five days were filled with much more fun and learning! We listened to several lectures from different personalities on various themes such as leadership, community needs analysis, values, self-awareness, communication skills, personal goals, and so on. We participated in workshops relating to good leadership skills, team building, critical thinking and communication skills. Participants did not only get the opportunity to hear inspiring talks from different successful people who are occupying leadership positions in their various career paths. We were able to interact with them, learn from them, and asked questions about the challenges they face as leaders, as well as how they overcome them.

People from the same country were put into different working groups. Personally, it took a while to know all the names of my group members, but I got it, finally. (Esther, don’t worry! Everyone in the group had the same challenge as you – Editor’s note). There were nine different nationalities in my group. After introductions we soon got busy with the activities. Our first challenge was to create a group name, banner and mascot. It took a while, a lot of team work and contribution of ideas but ‘we arrived’. Group work thus enabled us to mix with everyone and share ideas.

The whole ASLFL programme remains an experience to remember, yet several moments stand-out for me.

The Human Bingo activity got me talking and more open. We also had the Team Scavenger Hunt and I enjoyed mixing with my group members. What I recall from the Karaoke was that I was so excited before it. I wanted to sing but I was so scared. My hands shivered more each time I tried to calm down and I did not want to stand up to sing. Then came this huge conviction to do it and the only song that came to my mind was ‘Blessings’, a Christian song I like for obvious reasons. I remember walking up to the podium and taking a deep breath. The rest of the story is now history! So that was my first real personal challenge: acting even though I was so scared! That was basically what the conference was about: taking-up challenges and overcoming fears. The rousing applause that followed my performance was so encouraging and I realised that people actually appreciated virtually everything one did. There was nothing to be scared of after all. That was the beginning!

The rest of the week saw me getting better at communicating, being less timid, taking up challenges, voicing my opinions and learning about different cultures. I improved in my communication and presentation skills. I learnt how to be reflective and what I would like to do for my community. I became more aware of my personal and leadership goals.

The program was not ‘all work and no play…’ As well as the events already listed above we had many other enjoyable opportunities to show-off some of their talents as well as, a ‘Novelty Olympic Games’.

The Albert Schweitzer Leadership for Life Conference is one I will never forget. It had a huge impact on my life. Not only did I have fun, I also met people who made me realise that we are all unique and gifted in so many ways. I met people who told me good things about myself that I was unaware of, who cheered me on when it was time to speak and who told me, in the words of Brian (one of my group members) that “You will be a great doctor.” I met people who helped boost my confidence, engaging in activities which made me a better person all round and which taught me how to be a good leader, that I could be a good leader, I should be a good leader and that I will be a great leader.

The ASLFL program has made a positive impact on me and I am more aware that “the very essence of leadership is that you have to have a vision. You can’t blow an uncertain trumpet.” (Rev. Theodore M. Hesburgh).

More importantly, I learnt with my peers how to Live, to Love, to Lead and to Learn.

Editor’s Note: After the Conference concluded the group visited the OLA Community at Ardfoyle Convent in Cork City where they met many Sisters, some of whom had worked in Nigeria for more than fifty years. Our picture below shows the Nigerian group with (from left) Sr Esther, Sr Columbiere and Sr Mary Crowley in the Community cemetery where many OLA missionaries are buried. Esther Ade-Adeleye, the author of the above article, is fourth from the left. The presence of these committed students are a testimony to the hardwork and dedication of the missionaries down the years. May almighty God give success to all their endeavours in the future. Amen.