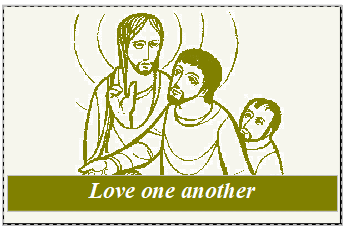 ‘Love one another as I have loved you’

In the year 120 AD Aristides, an Athenian philosopher, defended the early Christians in a letter he wrote to the Emperor Hadrian. His words give us a striking picture of their exemplary lives: ‘Christians love one another. They never fail to help widows; they save orphans from those who would hurt them. If one of them has something, he give freely to the one who has nothing. If they see a stranger, Christians take him home and are happy, as though he was a real brother or sister. They don’t consider themselves brother and sister in the usual sense, but brothers and sisters instead through the Spirit of God. And if they hear that one of them is in jail or persecuted for professing the name of their Redeemer, they all give him what he needs… And if there is among them any poor or naked person, they fast two or three days in order to supply the need. They live with much care, justly and soberly as the Lord their God commanded, and they do not declare in the ears of the multitude the kind deeds they do but are careful that no one should take notice of them…. Truly this is a new people and there is something divine in them.’

The great Church historian, Adolph von Harnack, also noted this extraordinary witness of the Early Christians when he wrote: ‘The new language on the lips of Christians was the language of love. But it was more than a language, it was a thing of power and action.’  Clearly, the Early Christian community had taken to heart Jesus’ final instruction to his disciples on the eve of his death: ‘Love one another as I have loved you’, an instruction repeated twice in today’s gospel. We usually remember the last words spoken of those who were close to us. Jesus’ disciples not only remembered them: they practised them; they lived them. As the testimony of Aristides shows, their love was not mere words or pious gestures, but a practical love, expressed in deeds of caring service – service especially to the poor and those most in need. It was the kind of love Augustine referred to when he wrote: ‘It has hands to help others. It has feet to hasten to the poor and needy. It has eyes to see misery and want. It has ears to hear the sighs and sorrows of people. That is what love looks like’. Sadly, as Mahatma Gandhi has observed, and as history testifies, many who have dared to call themselves Christian have failed to abide in the home of love and to emulate the admirable example of the early Christians. By their hatreds and prejudices, their violence and divisions, they have given, and continue to give, counter-witness to the explicit command of Jesus and to the God who is Love (as today’s Second Reading states).

In contemporary parlance, love is, as Pope Benedict XVI pointed out in his first encyclical letter, God is Love, a much debased and misused word, a word employed to cover up what is the very opposite of love – domination and exploitation. The love Jesus wants his disciples to practice is, in the words of von Harnack (cited above) ‘a thing of power and action’, a reflection of that divine energy that brought the universe into being. It is a love that is ever faithful and constant. The only adequate measure of this love is the enduring love of God the Father for all his children: ‘I have loved you with an everlasting love and am therefore constant in my affection for you’ (Jer 31:3).

The love that has its origin in God is a love that is universal and unrestricted in scope, open to all, irrespective of class or ethnicity. This truth is pointedly illustrated in today’s first reading from the Acts of he Apostles, which tells the story of the reception and baptism of Cornelius and his family into the Christian community. The story of Cornelius is not primarily a conversion story. It is rather the story of how the early Christians are led by the Spirit to overcome their innate prejudice and antipathy to the Gentiles, and to accept them into their  community. As Peter came to realise, ‘the truth is… that God does not have favourites, but that anybody of any nationality who fears God and does what is right is acceptable to him’ (Acts 10:34-35). The truth that Peter, and the early Church, came to realise is that God loves and cares for everyone, that his Spirit is present and active in the strangest places, in and through persons and situations where we might least expect her to be present, situations that invariably take us by surprise.

The spiritual journey that led Peter to welcome Cornelius into the Christian family was a journey of discovery into the outreaches of divine love. It is a journey that remains unfinished, a journey we are all called to make over and over again, as we strive to live out, in the circumstances of our time and place, Jesus’ great commandment of love. Love is the one and only power that will truly transform the world and draw it home to its divine source, the God of Love. In the stirring words of Teilhard de Chardin, ‘Someday, after mastering the winds, the waves, the tides and gravity, we shall harness for God the energies of love, and then, for the second time in the history of the world, humans will discover fire’.