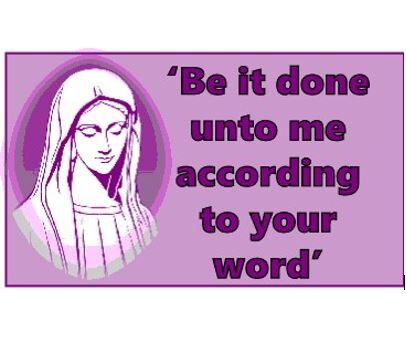 Waiting with Mary
The role of Mary in the unfolding of God’s plan of salvation is one of the great themes of the Advent season. Some liturgists argue that December has an even greater claim than May to be called ‘Mary’s month’. In today’s Eucharist, it is the scene of the Annunciation that is evoked in the opening prayer, and recounted in the gospel reading – that dramatic moment when Mary said ‘yes’ to God’s choice of her to be the mother of the Messiah. The Second Vatican Council in its Constitution on the Church highlights the importance of Mary’s ‘yes’ in bringing God’s plan of salvation to fulfillment:

The Virgin Mary, when the angel brought the news, welcomed the Word of God in her heart, and in her body brought life into the world… Embracing God’s saving will with a full heart and impeded by no sin, she devoted herself totally, as the handmaid of the Lord, to the person and work of her Son.

Once assured that she would become the mother of the Messiah by God’s Spirit, Mary responded with the total gift of herself: ‘Be it done unto me according to your word’. Her response of total availability was made possible by the way she had lived up to the time she received the angel’s message. She had grown up with a profound awareness of God’s presence in her own life and in the life of her people. This is captured beautifully in the familiar prayer, the Magnificat.

The Magnificat is one of the most hopeful of all Christian prayers. We pray it so often that we easily miss its meaning – and how much it tells us about the way God has acted, and continues to act, in history. It is Mary’s prayer of praise and gratitude to God for choosing her as the mother of the ‘Son of the Most High’ – Emmanuel. The long period of waiting is over and the great hope of Israel is about to be realised. Mary’s experience of God’s action in her personal life is the starting point of the prayer: ‘My soul magnifies the Lord… for he has done great things to me and holy is his name’. The prayer then goes on to situate her experience in the context of the historical experiences of the people of Israel from the time of Abraham and Sarah down to the time when Mary lived.

The Magnificat is a popular prayer, especially among marginalised and oppressed people.  It is also a very challenging prayer for people living in the so-called ‘first world’. Far from being the prayer of an innocent or sheltered girl, it is the prayer of a mature young woman, who bears in her womb as well as in her heart the hopes of a downtrodden people. It is clear that Mary has reflected often and prayerfully on the social and political history of her people – a history of ups and downs, successes and failures, joys and sorrows. In this history, God had manifested his power by putting ‘forth his arm in strength’ and scattering ‘the proud of heart’; bringing down ‘the powerful from their thrones’ and raising up ‘the lowly’; filling ‘the starving with good things’ while sending ‘the rich away empty’.

The God that Mary praises with all her heart is a loving and compassionate God who is ‘ever mindful of his mercy’;  a God passionately concerned for the plight of those oppressed and pushed aside in the dramatic struggle between the ‘haves’ and the ‘have nots’. This is the God, whose Son Mary ‘bore in her womb with love beyond all telling’, (as the Second Advent Preface puts it). This is the God we meet in the person and ministry of Jesus, the Christ.

There is hardly any better way of preparing ourselves for the birthday of Jesus, and of getting to know him better than to put ourselves into Mary’s shoes at this time, the time of her pregnancy. From the moment the Angel left her, Mary knew that Jesus was there within her womb. But she had to wait nine months, to wait for her child to appear, to show himself, so that she could see him, touch him, feed him, hug him, and kiss him. Women, especially mothers, can easily identify with Mary’s feelings during her pregnancy, the joys and the pains, the longing and the anxiety – until her time was ripe and the child within her would come from her womb and be visible. Then she could gaze into his face, hear his cries, and hold his shivering body to her breast. She would experience her child with all her senses: eyes, ears, touch, taste, and smell. Then her waiting would be over and her joy would know no bounds.

If we invite Mary to lead us through this Advent season and remain close to her, we can be certain that Christ will become more alive for us, too, and we will experience some of Mary’s Christmas joy and join with her in praising God for the wonders of his love.